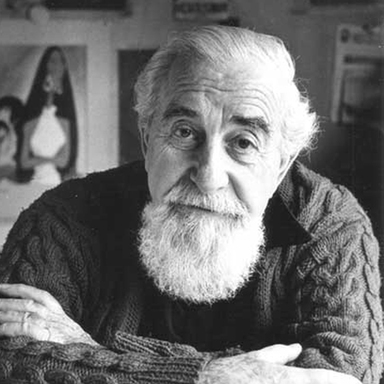 His black inks can look blacker than black, and he can make the untouched white of the page work for him as a henchman and a friend. He has no favorites: in a big cast, every man and every woman is drawn with equal care. And he does it with an evident pleasure that makes the reader want to go right out and buy tickets.
- John Russell

People who study [Hirschfeld drawings] carefully realize that, in addition to being amusing, they are works of art, and many of them masterpieces. In the field of calligraphy, Al is a genius. He is a master of line, perspective and design. The principal museums in America buy his drawings because they are not only vivid records of people everyone knows but also part of the twentieth century. Manners and styles will change. But Als drawings will remain, like those of Cruikshank, Daumier, and Toulouse-Lautrec, as records of a way of life by an artist who has a point of view.
- Brooks Atkinson

The problem of placing the right line in the right place has absorbed all of my interests across these many years...I am still enchanted when an unaccountable line describes and communicates the inexplicable.
- Al Hirschfeld

Al Hirschfeld brought a new set of visual conventions to the task of performance portraiture when he made his debut in 1926. His signature work, defined by a linear calligraphic style, has made his name a verb: to be Hirschfelded was a sign that one had arrived.

His style stands as one of the most innovative efforts in establishing the visual language of modern art through caricature in the 20th century. Intuitively, he assimilated the graphic sense of both his friends artists John Held and Miguel Covarrubias, the manipulation of perspective of the masters of Japanese woodcuts, Hokusai and Utamaro, and transmuted the negative characteristics of the genre known as caricature into his thumbprint: a joyful, life affirming line. Instead of relying on the outline or profile of his subjects, like many of his early contemporaries, he employed a palette of graphic symbols (including his daughters name, Nina, which he began hiding within his work in 1945) to translate the action of the whole body into line drawings that have become the lingua franca of generations of actors and audiences.

When he could, the artist worked from life, making sketches and notes in his pad, or during a performance in his pocket. His notes could sometimes resemble a shopping list with descriptions of anatomy like Brillo pad, scrambled eggs, or chicken fricassee. Back in his studio, he collated his notes and sketches with photos to shore up his faulty memory and distilled them into a graphic design that left an indelible imprint on the page.

Hirschfeld said his contribution was to take the character, created by the playwright and portrayed by the actor, and reinvent it for the reader. A self described characterist, his signature work appeared in virtually every major publication of the last nine decades, including a seventy-five-year relationship withThe New York Times, as well as fifty editions of theBest Playsseries and on numerous posters, book and record covers. He supplied artwork to film studios for more than fifty years, and more covers toTV Guidethan any other artist. His work appeared on two series of U.S. postal stamps. He was declared a Living Landmark by the Landmarks Commission in 1996 and a Living Legend by the Library of Congress in 2000. Just before his death in January 2003, he learned he was to be awarded the Medal of Arts from the National Endowment of the Arts and inducted into the Academy of Arts and Letters. The winner of two Tony Awards, he was given the ultimate Broadway accolade on what would have been his 100th birthday in June 2003. The Martin Beck Theater was renamed the Al Hirschfeld Theater.

Hirschfelds drawings and paintings give the truest reflection of the man: uncomplicated, engaging, often irreverent, and perceptive. His contributions continue to provide an engaging paradigm for the discussion of artistic innovation and idealism in the performing arts.

Hirschfelds interest remained in the present, and perhaps what was opening later in the season, to the end. No matter how we choose to celebrate Hirschfeld, he knew there was a clean cold-pressed illustration board sitting on his drawing table that cared little for what he has done in the past. On it would be his favorite drawing: the one he is working on at that moment.

-From an essay by David Leopold, Archivist, The Al Hirschfeld Foundation

Please note: Content of biography is presented here as it was published in 2004.
Photo by: Nancy Rica Schiff