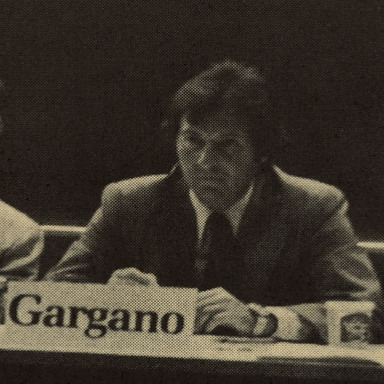 I was born during the Great Depression, on June 4, 1932. And, if that wasn't enough, it had to happen in Detroit.

Both my parents emigrated from small towns in central Italy (about sixty miles apart in the province of Abruzzi) and found each other in the City of Wheels.

To my great joy, they are both still alive and well, lucid, energetic, enthusiastic, and loving, and have remained married to each other for the last 60 years.

Although my father never made much money in all the years he worked so hard before he retired, I consider him and my mother to be two of the most successful people I have ever known.

Beyond my family and friends, my next fondest memory of Detroit was a high school called Cass Tech. Thirty years ago, it had to be the finest high school in the country. After graduation, I spent the following two years searching to find a level of teaching in the Arts that came remotely close to what was offered at Cass Tech.

I first enrolled at Wayne University. Had I tried harder, or perhaps transferred to something practical, like hotel and restaurant management, I might have been able to avoid the draft and the Korean War as effectively as my friends did.

I left Wayne University after a year, the Society of Arts and Crafts after one semester, and was drafted in mid-term from yet another art school, which, in turn, left me with no feeling of loss and, in fact, a sense of relief.

In October 1952, at the induction center at Fort Custer, I was told by the interviewing officer that with my academic background, there was little risk of my winding up in the front lines of Korea as a combat infantryman.

In August 1954, upon my return from the front lines of Korea as a combat infantryman, I decided to enroll at Cranbrook Academy of Art. The insulated world of MFA candidates on the small campus of the automobile executive suburbs was too extreme and sudden a change. The cultural shock was more than I could endure. So, restless and impatient, I left after a year to enter the uncertain world of "commercial art.

I spent the spring of 55 pounding on the doors of local art studios in Detroit. My portfolio of drawings, paintings and designs were criticized as not acceptable for newspaper reproduction. Could I render an automobile transmission? Could I work in scratch-board?

Chrysler Corporation, I had heard, was recruiting designers. During my job interview, my prospective employer was intrigued by some typographic designs in my book. I was offered a position that would consist of designing lettering that would eventually appear on either the fronts or backs or sides of Chrysler-made automobiles. I declined.

Bitter and disappointed, I took what I thought would be a temporary job in the bullpen of an advertising agency Campbell-Ewald. After all, how could anyone with brains and talent work in advertising permanently?

By December of 1955, I had worked on my portfolio in the evenings to the point where I thought I could finally get a job as an illustrator.

Al Scott, the man who had hired me, was a quiet and thoughtful man. When I told him what I planned to do, he urged me to give advertising a chance. His rationale was convincing: "Would you rather work in a business where you can create ideas or in a business where ideas are created for you?"

For that, I am eternally grateful.

Campbell-Ewald moved me along quickly. After two years, I was promoted to Group Art Director and responsible for five accounts that weren't very large or, for that matter, very interesting. But I was given encouragement and, more importantly, support for work I created that was far different from anything previously initiated. I began to enjoy my work enormously.

New York was Mecca. Since adolescence, I had always wanted to be there. In the spring of '59, my dream of working in New York became a reality.

Jim Durfee and I were transferred to Campbell-Ewald, New York, to join Carl Ally (who had recently moved there from Detroit) to work on Swissair and to develop new business.

The three of us hit it off together instantly. It took only a few months for us to decide that one day we would have our own agency.

That day arrived on June 25,1962. We opened our doors with three small offices in the Seagram building with our only accountVolvo.

The winter following our first year in business, I had the good sense to marry Elaine Pafundi, an art director whom I had met during my brief stay at Benton & Bowles. (Marrying another art director has one real advantageit automatically eliminates two hours of daily explanations.)

This is the twentieth year of Ally & Gargano and, in retrospect, I believe the goals we established for ourselves back then have been essentially realized: our survival, our commitment to creating and defending good work and, finally, the broad-based recognition we have earned for that effort.

And for that, I am sincerely thankful.