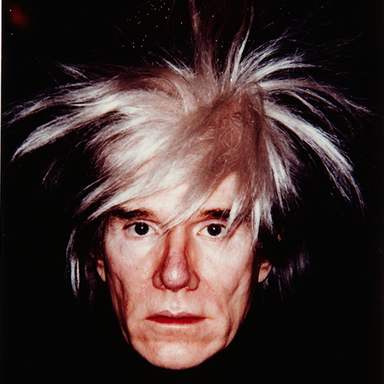 Andy Warhol painted a series of Coca-Cola paintings in 1960. He worked in a succession of approaches, starting with Abstract Expressionist and ending with a clean, graphic style that looked more like an illustration than a painting. He showed the series to four friends from the art world. They all preferred the final approach. The rest is pop culture history.

Artist, illustrator, filmmaker, entrepreneur Andy Warhol became an icon just like the subjects of his paintingsMarilyn Monroe, Elvis Presley, Mao Zhe Dongbefore his death. But his earlier connection to the New York advertising and design community bears recognition for the immense body of work he contributed to the industry as well as its direct effect on his later work.

Forties America was psychologically grim. The country had just recovered from the Depression. The Second World War had brought the cruel outside world to the hearts and minds of isolationist-minded Americans. The average man worried about protecting his at-home interestsmoney, property and mannersfrom Fascists, Communists, and atomic bombs. Compromise was his best psychological defense; keeping up with the Joneses' was the standing rule. In this atmosphere of conformity, Warhol enrolled in the Pictorial Design program at Pittsburgh's Carnegie-Mellon Institute of Technology's Department of Painting and Design.

Twice a year, he and fellow art student Philip Pearlstein went museum and gallery hopping in New York. When they graduated in 1949, Pearlstein and his wife Dorothy Kantor moved with Warhol to join the burgeoning Manhattan art world. The Beat movement was there, slamming the mentally lethargic, decadent attitude of the middle class. Artists and writers were out to alter the public consciousness. New York was also the home of breakthrough creativity in the commercial arts industry. Madison Avenue was the advertising and editorial hub of the world. It was the perfect place for an illustrator to make a living.

Another of Warhol's classmates had also moved to New York, but his aspirations directed him to midtown. George Klauber went to work as a special assistant toWill Burtinat Fortune magazine. He helped establish Warhols illustration career by giving him some of his first commissions.

"Well, Andy was immediately employable. I was a very uncertain thingmy portfolio was one of those elaborately worked out, intellectualized things about the US Constitution (2B), and unfortunately, I hit New York in the beginning of the McCarthy era, and as soon as I walked in and somebody saw it, they immediately assumed I was some sort of political kook ... Andy went right to the heart of the matter, he knewthat's what I mean by he was immediately employable; he was only interested in illustration, and they were very direct."

Warhol's work may have been highly accessible, but his experiences were no different from other aspiring New York arrivals. He gained street smarts quickly. "I got one job, and then I would have to do it at night and then spend all day looking:' he recalled. "You carry your portfolio and after doing it for a couple of years you learn that if you come five minutes before twelve o'clock, that was the best time to come, because if they tell you to get there at nine, you would just sit around until five minutes to twelve and they wouldn't see you, so the best time was alwayswell, most of the people ate in the art departmentusually at lunch time, so you could always see them at twelve o'clock."

Glamourmagazine's Tina Fredericks hired Warhol to illustrate an article entitled "Success is a Job in New York." It was coming true for Warhol. His drawings appeared on record covers, books, Christmas cards, ads, and TV work for CBS'sLou Dorfsman. In 1951, he won his first ADC Award for a CBS record illustration.

The next year, his mother moved in with him. She contributed her distinctive handwriting to his illustrations and drawings. (Mrs. Warhola received an ADC certificate in 1958 inscribed "to Andy Warhol's Mother" for her calligraphic style.) His client roster grew to include NBC,Harpers Bazaarand Dobeckmun. Ironically, he was also commissioned to illustrate theAmy Vanderbilt Complete Book of Etiquettethat year. Warhol also had his first New York exhibition-a series of drawings based on the writings of Truman Capote at the Hugo Gallery. He began a series of drawing portfolios and artist's books between commercial assignments, includingLove Is A Pink Cakeand25 Cats Named Sam and One Blue Pussywith text contributed by Ralph T. Ward.

In 1955, I. Miller decided to recreate their image. The plan was to use repetition in order to drive home the visual message. Fashion editor Geraldine Stutz, advertising director Marvin Davis, and art director Peter Palazzo concentrated the placement of their strategy by running it only in national fashion magazines, theSunday Timesand theHerald Tribune. They hired Warhol because of the distinctive nature of his drawings and his ability to create repetitive themes. Palazzo noted:

"I would draw it out the way I would think it would be a decent composition, or I'd crop it and he'd finish it...he went home with the shoes and that was totally his own. I would not tell him how to draw there, because he usually did something nice on his own Andy was very easy in that sense; he just felt it was his bread and butter."

Warhol traveled to Japan, Southeast Asia, Italy and Holland in 1956 and had two exhibitions at the Bodley Gallery. The work for I. Miller,Harper's Bazaar, and Noonday Press won him additional ADC awards. His illustration business had grown so large that he formed Andy Warhol Enterprises, Inc. in 1957, and hired a few assistants.

He started making use of rubber stamps and other reproductive devices specifically to speed up production. Then iconographic images began infiltrating his work. A 1959 Tiffany assignment was a glimpse into his future: the illustration included a Coca-Cola bottle.

In 1975, Warhol said: "What's great about this country is that America started the tradition where the richest consumers buy essentially the same things as the poorest. You can be watching TV and see Coca-Cola, and you can know that the President drinks Coke, Liz Taylor drinks Coke, and just think, you can drink Coke, too. A Coke is a Coke and no amount of money can get you a better Coke than the one the bum on the corner is drinking. All the Cokes are good, Liz Taylor knows it, the President knows it, the bum knows it.

Please note: Content of biography is presented here as it was published in 1994.