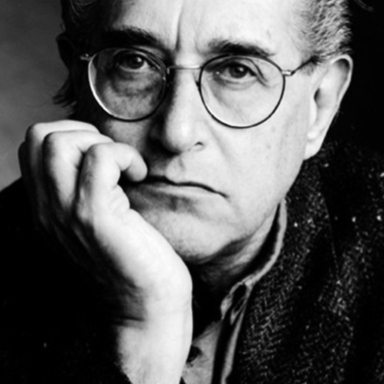 Art Kane was fascinated by snakes and fairy tale illustrations. He was the first Boy Scout in the Bronx to get a Reptile Study merit badge (he owned 32 snakes) and he wanted to be aNorman Rockwellor N.C. Wyeth when he grew up. Drafted after his first semester at Cooper Union, he volunteered for a camouflage battalion. He thought he would be painting jungle patterns on trucks but his real mission was to act as a decoy to deflect German artillery from American troops. He survived.

Kane pursued a theatre career for about a year after his army discharge. He returned to Cooper Union and graduated in 1950 with straight A's. He took one photography course in his senior year but only because it was a requirement. His first experience with a camera, at age 12, had been a bad one. His photograph of the American flag gloriously waving atop a towering flagpole, looked like a pinstripe topped with a pinhead. Content did not follow concept.

At age 26, Kane was art director forSeventeenmagazine. Professionally, it was satisfying to work on a magazine under the influence ofCipe Pineleswho had a high regard for illustration, particularly for a freer, more painterly approach. Kane worked atSeventeenfor six years and for six years received awards for his art direction.

In the meantime Kane was exploring photography on weekend outings with talented friends like art directorRoy Kuhlmanand photographers Dan Wynn and Carl Fischer. Kane also went shooting withRudolph de Harakwho was then art director for the promotion department of Seventeen. DeHarak was an avid experimenter and urged Kane to be daring with the camera. It was with DeHarak that Kane remembers the revelation of discovering he couldcontrolthe camera. It happened on Queens Boulevard, in front of a Howard Johnson sign. Content could follow concept.

Kane joined the Irving Serwar Agency, an outstanding fashion advertising house, in 1956. He continued to serve as an art director but his passion for photography grew. He studied withAlexey Brodovitchwho nurtured and provoked photographic talent at The New School. Kane submitted work to photo annuals and was accepted.

In 1958 Kane spent his summer vacation on a photography assignment that changed his life.Esquireart director Robert Benton and editor Harold Hayes hired him to do photographs for a story on the history of jazz. His portraits of Louis Armstrong, Lester Young and Duke Ellington, his shot of Charlie Parker's grave and finally his grand, sepia-toned jazz alumni photograph proved that the mind's eye and the heart's vision could speak on film. Mission accomplished; Kane gave up art directing to pursue photography full time.

With the strong conceptual skills of an art director and the discriminating eye of a photographer, Kane conceived and produced some of the most memorable and striking images of the past three decades. Not exactly documentary, nor strictly journalistic, Kane's work is best described as photo-illustration. The images tell half a story, the viewer fills in the rest. While there is no one unifying style and in fact the variety of Kane's subject matter is remarkable, all of his photographs have an arresting quality. Odd angles, weird settings, saturated colorswe never see things as they are or ought to be. What we see is a sort of Freudian, reptilian otherworld that strikes some archetypal chords.

Kane's work has appeared inLIFE, LOOK, Esquire, Vogue, Harper's Bazaar, Italian Bazaar, GEO, Venture, McCall's, Italian and German Vogue, Amica, Stern and Zeit. ForLIFE, Kane did portraits of rock stars The Who, Cream and Jefferson Airplane. He posed the rough, tough and hairy Mothers of Invention with smooth, clear-skinned babies. He shot Bob Dylan crouching in a corner. He put Jim Morrison in a green-tinged closet, a TV set turned on at his solar plexus, as if his life-force were run by game shows and sit-coms. ForEsquire, Kane shot a somber, poignant Joe Louis for the story, "The Champ at 50. For the German magazineZeit, New York School artists Larry Rivers, Christo, Cy Twombly and Robert Rauschenberg were depicted in a manner which bespoke each one's artistic sensibility: Larry Rivers standing on a macabre suburban porch, Christo here-one-minute-gone-the-next, and Twombly and Rauschenberg part of a Rauschenberg-style found object montage of newspapers and a snapshot.

Kane's illustrative vision translated the 60s' and 70s' counter-cultures, political upheavals and spiritual rejuvenation. A series of Kane's montage photographs accompanied the lyrics to songs by The Beatles in an issue ofLIFE. ForLOOK, Kane produced a powerful photo-essay to "Songs of Freedom" by posing studio model/dancers to evoke the tension and struggle of Southern blacks. He photographed the Viet Nam war, not in blood and guts but in the unnerving stare of an amputee. He documented the California throw-away culture with a towering junk car pile and he brought the West Coast world of therapeutic psycho-spiritualism into photos which merged the human body with the omnificent sun, sea and sky.

The fashion photos forVogue, Stern, Harper'sand other publications are characteristically a mix of oddly postured women in unconventional sets. Like Kane's editorial work, the commercial imagery evokes the same kind of storytelling, always with an unusual twist. For a spread on hosiery, the legs seem detached from the body. For an outerwear ad, the model is colored to match the coat. A bathing suit shot is not taken, as expected, at the beach or poolside, but on the roof of a checkered cab. The fashions are rendered in such painterly terms of color, texture and form, they become indistinguishable from the total sensual experience of the photograph.

The list of Kane's commercial clients is long and diverse: advertising campaigns for Marlboro, Camels, True, Virginia Slims and Gitanes cigarettes; beer ads for Miller, Heineken and Lowenbrau; automobile ads for Volvo, Saab and Volkswagen; ads for Coca Cola, Sears and Johnson & Johnson; campaigns for United Airlines, TWA, American Airlines, Eastern and British Airways; fashion layouts for Bloomingdale's, Cacharel, Revlon and Coty; and promotional publications for Heinz, Avis, Champion Paper, Hennegin Press, Zanders Paper and Exxon. Kane is extremely versatile, as the scope of his work will attest; yet all his assignments bear the unique personal interpretation that gives the photographs their impact.

Kane's photographic techniques are fairly straightforward. With an emphasis on pre-production, he eschews the utilization of complicated equipment or manipulated processing. The one altering activity to which he has devoted time is sandwiching slide images for montage. This is a technique that Kane refined to great subtlety by using similar images whose separateness is barely discernible. The use of montage, selective focus, wide-angle lenses and inverted images approaches clich status today, but in the 60s and 70s, Kane's inventiveness was truly pioneering. His use of a 21mm lens to stretch an image to the edges of the frame was very controversial when it appeared in aVoguefashion spread in the early 60s.

Art Kane is also a songwriter, lyricist and playwright. He has directed TV commercials. He was corporate design director for Penthouse-Viva International. His photographs are in the permanent collection of the Museum of Modern Art and the Metropolitan Museum. He has been honored by almost every photo-design organization in the United States: American Society of Magazine Photographers, Photographer of the Year, 1964; Newspaper Guild of America, Page One Award, 1966; Augustus Saint-Gaudens Medal for Distinguished Achievement given by Cooper-Union, 1967; New York Art Directors Club, 14 Medals and 28 Awards of Distinctive Merit; medals and awards from Philadelphia, San Francisco, Chicago, Detroit and New Jersey art directors clubs; and awards from the AlGA, Society of Typographic Arts and Communication Arts Magazine. In 1984 Kane was given the American Society of Magazine Photographers Lifetime Achievement Award.

When Art Kane made the monumentous decision to be a photographer, he vowed to himself that he would not compromise his craft for the lure of money or security. After thirty years of shooting, he is still excited about each assignment. And his work remains unmatched.

Please note: Content of biography is presented here as it was published in 1985.
Portrait by Steven A. Heller