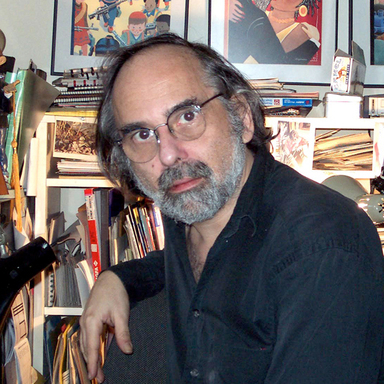 Art Spiegelman has, according to theLA Weekly, almost single-handedly brought comic books out of the toy closet and onto the literature shelves. In 1992 he won the Pulitzer Prize for his masterful Holocaust narrativeMaus, which portrayed Jews as mice and Nazis as cats. The twoMausbooks have been translated into over 25 languages, and the work was chosen by the New York Public Library and theNew York Times Book Reviewas one of the 100 most significant books of the last century. His comics are best known for their shifting graphic styles, formal complexity, and controversial content. He believes that in our post-literate culture the importance of the comic is on the rise, for comics echo the way the brain works."

Art Spiegelman was born February 15, 1948 in Stockholm, Sweden. His family immigrated to the United States in 1951, eventually settling in Rego Park, New York. Having rejected his parents' aspirations for him to become a dentist, Art Spiegelman studied cartooning in high school and began drawing professionally at age 16. He went on to study art and philosophy at Harpur College before becoming part of the San Francisco-based underground comics movement of the late 1960s and 1970s. Spiegelman and Bill Griffith co-edited the seminal underground comix anthologyArcadebetween 1975 and 1977, and in 1977 Belier Press publishedBreakdowns, a hardcover volume collecting Spiegelman's strongest underground work.

As creative consultant for Topps Bubble Gum Co. from 1965-1987, Spiegelman designedWacky Packages, Garbage Pail Kidsand other novelty items, and taught history and aesthetics of comics at the School for Visual Arts in New York from 1979-1986.

In 1980, Spiegelman co-foundedRAW, the acclaimed avant-garde comics magazine, with his wife, Franoise Mouly. For eleven years,RAWlavishly presented groundbreaking work by contemporary cartoonists and serialized Spiegelman's Maus in chapter-length installments. The two volumes ofMauswere published by Pantheon in 1986 and 1991, respectively, and were published together asThe Complete Mausin 1996. Between 2000 and 2003 Spiegelman and Mouly co-editedLittle Lit, a series of three comics anthologies for children published by HarperCollins, with an anthology of that work due from Puffin in late 2006.

Art Spiegelman's work has frequently appeared inThe New Yorker, where he was a staff artist, writer and cover artist from 1993-2003. In 2004 Spiegelman completed a two-year cycle of broadsheet-sized color comics pages,In the Shadow of No Towers, first published in a number of European newspapers and magazines as well as inThe Forward. A book version of these highly political works, published by Pantheon in the United States, appeared on many national bestseller lists and was selected byThe New York Times Book Reviewas one of the 100 Notable Books of 2004.

Art Spiegelman's work has been displayed in numerous solo and group exhibitions, includingThe Comic Art Showat the Whitney Museum of American Art (1983) andMaking Mausat the Museum of Modern Art (1991). A major exhibition of his work has recently been shown at the Los Angeles Museum of Contemporary Art and the Milwaukee Art Museum as part of theMasters of American Comicsexhibit, for which he was a senior consultant (November 2005 - August 2006).

His many awards have included the 1992L.A. TimesBook Prize for Fiction and a 1995 Honorary Doctorate of Letters from S.U.N.Y. Binghamton. In 2005, Art Spiegelman was made a Chevalier de lOrdre des Arts et des Lettres in France, was named a Fellow of the American Academy of Arts and Sciences, and was included inTime Magazines list of the 100 Most Influential People of 2005.

Art Spiegelman is currently working on a comix format memoir,Portrait of the Artist as a Young !@##$%!, which will incorporate a reprinting of his most significant early underground comix work. Spiegelman is also assembling a book about the making ofMaus, entitledMeta-Maus.