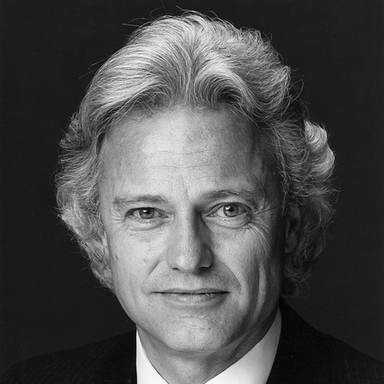 For Bjarne Martin Pedersen, everything in life matters, whether it's sweeping a floor or designing a magazine. In fact, one of the most important lessons he learned about design was while sweeping sawdust off the floor as an apprenticing laborer for an old-world Norwegian carpenter in the 1950s. "I learned a work ethic," he recalls. "When the master carpenter touched a piece of wood, it became the most precious thing on earth."

This knowledge, the understanding that care and hard work can transform a lump of matter into a priceless entity, has inspired Pedersen's long career, one that embraces all aspects of graphic design from advertising to corporate identity and from packaging to magazine publishing. Today, Pedersen is owner, publisher and creative director of Graphis Inc., the international publishing firm that producesGraphisprobably the industry's most beloved magazineas well as numerous books and annuals.

Born in Norway, and raised in Brooklyn, Pedersen first gained attention in the late 1960s, when, as principal of Pedersen Design Inc., he helped create the first airline magazine,American Way, for American Airlines. Smart and modern, the publication made a startling graphic statement that revolutionized forever the way people looked at in-house magazines. It was the first time corporate America was able to speak to consumers with an authentic editorial voice. When he saw the magazine, famed designerLou Dorfsmanrecalls thinking, "Who the hell is doing this?"

For the next thirty years, Pedersen won more than 300 awards, almost effortlessly, or so it seemed. "I can't remember anything in the man did that I didn't like," notes Bob Ciano, art director of Encyclopedia Britannica. "Time after time, he would take a stodgy, even conservative publication and give it a cutting edge. " Like a good carpenter, Pedersen was turning humble and glamorous projects alike into highly crafted things of beauty.

"If I am going to do something, I might as well do it well," says Pedersen. He is the kind of designer who never leaves well enough alone. Case in point: after two years in construction, sweeping floors, carrying lumber and pulling nails, the young Pedersen got a $45-a-week mailroom job at the Benton and Bowles advertising agency. His responsibility: make packages. "No one on the staff could show me how to construct a good parcel," he tells. "So I went to Bloomingdale's during lunch hour and found someone at the gift-wrapping desk willing to show me the ropes." Soon, his packages were so exquisite, art directors took notice of him and he was promoted to paste-up assistant. "I was in awe of the quality of the work being produced. It was an honor for me to help someone likeGene Frederico, one of the geniuses at Benton & Bowles at the time, create beautiful presentations. Once, in an excess of enthusiasm, I chopped my tie on the paper cutter."

But it was not long before Pedersen realized that delivering graphic design loaded with high production values could not, in any way, replace visual communication. Enrolled at night at the School of Visual Arts, he had a teacher who, on reviewing the first assignment, ruthlessly burned his students' finished comps with the flame of his cigar lighter when he felt that the presentation was superior to the concept. Appalled, Pedersen would watch as labor-intensive portfolio pieces went up in smoke. "But the message was that it was more important to spend time thinking than comping," he says.

Nothing could deter his love of exactness. While he learned to be a savvy communicator, he never gave up his obsessive pursuit of perfection. In 1978, while a partner at Jonson Pedersen Hinrichs & Shakery, he initiated and developedNautical Quarterly, a publication of such elegance it influenced an entire generation of editorial art directors.

The son of a fisherman, and an accomplished sailor himself, Pedersen was passionate about the magazine's subject matter. As a result, his design was as evocative as the bracing smell of creosote mixed with wood varnish and brine. Readers were treated to a memorable visual experience that captured the mystery of the marine environment at its most pristine.Nautical Quarterlygot every award the industry had to giveand put Pedersen on everyone's map. "My God, what Marty does is so perfect, so clear," says designerMassimo Vignelli, a colleague for many years. "He is addicted to supreme beauty. But it's not out of ego or greedit's out of love for our profession."

"What he does is too beautiful!" exclaims Lou Dorfsman. "It would be too much, except that Pedersen also turns out to be a great editor and publisher as well."

"Marty is a navigator," offers Margaret Richardson, a publishing executive at International Typeface Corporation, "a man of the sea. He has an innate sense of direction. He trusts his visionand somehow always manages to bring all his projects safely back to port."

The project Pedersen most recently brought back to port is Graphis. Purchased in 1986, the magazine gives him a chance to showcase the work of designers he admires. "He is the biggest fan of anyone he publishes," says Richardson. "To be featured in Graphis is the most sincere and personal form of homage Pedersen could give anyone. Marty's seal of approval secures you a place in design history."

For Pedersen, choosing the work that goes in Graphis, or in one of the many Graphis annuals and books, is probably the most demanding of all disciplines. "The selection process is very introspective," he explains. "I spend a lot of time looking at portfolios, brooding, agonizing, asking myself what makes them unique. I try to publish work that's so compelling I can't get it out of my mind."

Pedersen's uncompromising quest for quality has earned him a reputation for being stubborn. "He knows who he is," says Kit Hinrichs, one of his partners in the 1970s. "Marty is a self-made man. He always had to depend on his own wit. Nothing was ever given to him for free. He took risks, never following trends, always following ideas."

Some of the risks Pedersen takes have to do with aesthetics; others are blatantly financial. For a designer to become fiscally responsible for a legendary publishing house overnight took a lot of guts. "I have gained an enormous respect for business people," he says. "I feel they are as creative as anyone in our industry. In many instances, they are even more so, because to be on the business side means you have to be thinking on your feet continuously."

And think on his feet he does. Pedersen's survival in the business world is due in part to his ability to stand on the deck in the middle of a storm, and in part to a witty sense of repartee. "Beware. Marty is a seducer," says Hinrichs. "He can convince you to do things you probably shouldn't. I lost my shirt on a couple of projects with him, but I was thrilled with the result, and would do it again tomorrow."

Forewarned is forearmed. Pedersen will gamble everything he's got for the sake of quality. And he is likely to use his considerable charm to get you to do the same.