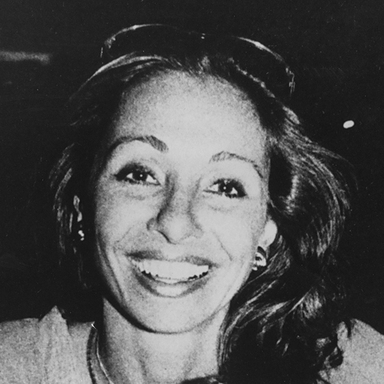 Bea Feitler was born in Brazil, the country to which her parents emigrated during World War II. Through their influence, she received a traditionalist education, stressing knowledge and excellence in all areas. She spent her college years at the Parsons School of Design, graduating in 1959. At that point, she returned to Rio de Janeiro where, with two other graphic designers, she founded Estudio G, which specialized in poster, record album, and book design. She also worked on the design ofSenhor, a Brazilian magazine committed to innovative graphics and design. It provided Feitler with an environment where she could experiment and where her talents could mature.

In 1961, Marvin Israel, one of Feitler's teachers at Parsons, became art director atHarper's Bazaar, hired Bea Feitler and Ruth Ansel as art assistants, and brought about a truly great collaboration between the two young designers. Two years later, they became co-art directors ofHarper's Bazaarand worked together as a complementary team until disagreements with management a decade later led them to resign and go their separate ways.

During her years atHarper's Bazaar, Feitler exerted her innovative design sense over every page of the publication. Through her vision, the magazine reflected the excitement and turbulence of the 60s, while remaining true to its traditions. In particular, Feitler had a special working relationship with photographers, gaining their trust by instinctively selecting their finest work to incorporate into her designs. Through her, photographers such as Bill King,Annie Leibovitz,Duane Michals, Bob Richardson, and Bill Salano were introduced to the magazine. The result was a steady flow of awards from the ADC and other major design exhibitions.

"I don't just sit around going to parties, or pushing my name by kissing people over lunch at La Grenouille. It would help, but I don't have the time. What sells me is my work," Feitler once remarked about her career. That sort of attitude led her, in 1972, to leaveHarper's Bazaarand join Gloria Steinem in launchingMs.magazine. Feitler's philosophy had long been: "A magazine should flow. It should have rhythm. You can't look at one page alone-you have to visualize what comes before and after." AtMs., her editorial design was often as startling as the articles, using Day-Glo colors and illustrations mixed with photographs, and devising conceptual, signature looks for each section of the magazine.

Reflecting both the feminist outlook of the magazine and the political tenor of the time, Feitler defied the conventional wisdom against all-type magazine covers in December 1972. "Peace on earth, good will to people," in pink and green Day-Glo proved to be a best-selling holiday message. It typified Feitler's instinctive sense of risks worth taking.

Feitler leftMs.in 1974. Even before that, however, she was involved with a wide variety of freelance projects. Through these, she demonstrated the full range of her talent and concern for innovation, designing posters and costumes for the Alvin Ailey Dance Company at City Center, record album covers (includingBlack and Bluefor the Rolling Stones), ad campaigns for Christian Dior, Diane von Furstenberg, Bill Haire, and Calvin Klein, and catalogues for Neiman-Marcus and Bloomingdale's.

The 1970s also saw her design concepts in the booksVogue Book of Fashion Photography 1919-1979, Cole, Helmut Newton'sWhite Women, Diaghilev and the Ballet Russe, Lartigue'sDiary of a Century, andThe Beatles, which sported a double-layered cover that folded out to be an Andy Warhol poster. Feitler's influence was by then such that she was able to demand, and get, her name on the title pages of these books in the same type size as the editor, writer, and photographer. Her demand was as much conceptual as professional self-interest. As she explained, "Modern books should be 50-50 in terms of visuals and words. People have to be hit on the head; they have to be drawn into a book. There is so much visual material in today's world that people can't judge what's good and what's bad. It is up to us, the graphic designers, to set standards."

Her limitless energy also allowed her the time and dedication to teach graphic design portfolio classes at the School of Visual Arts from 1974 to 1980, where she is warmly remembered as "one of the best" by department chairmanRichard Wilde. Her many students remember that she taught them with enthusiasm, encouraged their individual interests, and started them on their careers, often by hiring them herself. Hers was one of the classes that students fought to get into. "What really turns me on," she once stated in an interview, "is the 55 students in my editorial design course at the School of Visual Arts." It is a fitting tribute to her memory that the Bea Feitler Foundation annually gives a full-tuition scholarship to a School of Visual Arts student.

In 1975, at the insistence of Annie Liebovitz with whom she had worked atHarper's Bazaar, Feitler was engaged to design a special photography supplement forRolling Stone, beginning her famous six-year association with the magazine. She joined the staff full-time in 1977, in time to create the magazine's 10th anniversary edition, and significantly changed the magazine's look. Feitler redesigned the magazine once again in 1981, going from its original tabloid format to its current one.

While still atRolling Stone, Feitler began working as a consultant art director at Cond Nast Publications in 1978. There, she created the prototype for a new magazine,Self, and helped in its launching. "She was very experimental," saidSelfEditor-in-Chief, Phyllis Wilson. "Many Cond Nast publications stick with a red primary-color logo, but Bea introduced all sorts of funny colors, like fuchsia or really brilliant pink or orange. She also had a wonderful way of looking at photographs. In her way of seeing them, and cropping them, and moving them, you get something that would suddenly turn exciting."

Feitler's final project was the premiere issue ofVanity Fair, a revival by Cond Nast of the 1930s classic. Although she approved the mechanicals, she did not live to see its publication. She died on April 8, 1982, depriving the art world of her extraordinary talent and vision.

While her education and entire working life were spent in the United States, Feitler never became a U.S. citizen. When asked why not, she replied, "When my family fled the Holocaust, Brazil embraced them, and they prospered. It would be disloyal of me to reject my country." The comment exemplifies what many characterize as her fierce loyalties, as well as a life perennially lived in a kind of "Carnival" atmosphere. According to her good friend, Mikki Denhof, "Even if Bea was to stay in a hotel or guest room for one night, she would 'decorate' the room and make it somehow fun and attractive." In so doing, Bea Feitler was as comfortable in Paris and Rio de Janeiro as she was in New York City.

In her short life, Bea Feitler shaped the look of five magazines, discovered and collaborated with many of the great photographers of the century, and designed books that set unique standards for that industry. It is certain that the history of graphic design will recognize her as one of the 20th century's great art directors.