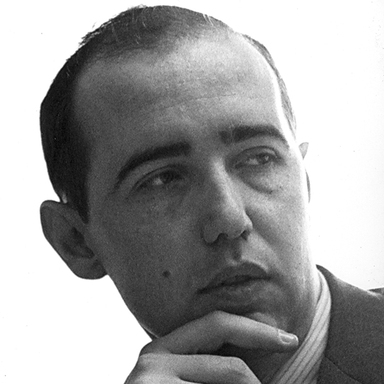 Bill McCafferys plan after graduating from the University of Pennsylvania and the Philadelphia College of Art in 1958 was not to embark on an illustrious career in advertising, but to go to New York and spend his time creating art, designing, and playing the saxophone.

He was happily freelancing as an illustrator for Esquire and as a designer for McGraw-Hill and Harper & Row, and working on myriad other projects, when he was offered an illustration job at Grey Advertising. Looking over the assignment, he ventured to comment on what he thought was wrong with it. Instead of an argument, he was given the opportunity to redesign the entire ad; the next thing he knew, he was a full-time art director.

This beginning typifies the career McCaffery went on to have. A Renaissance man, he does whatever needs to be done, and does it right. His colleagueRudolph de Haraksays of Bill, When there isnt the time, or sometimes when the solution to the problem is too personal to relate to others, he might write the copy himself, take the photograph, design the ad, or execute the finished art.

The newest art director at Grey, McCaffery had no book and no practical experience but plenty of ideas. When handed a job order containing copy and a rough sketch from a copywriter with whom hed spent no time, he inquired if this were proper procedure. Upon hearing it was, he headed upstairs to the executive suite to explain that the best way to foster the creative process was to bring the copywriter and art director together. The rest is history.

After making his mark as an art director, McCaffery moved to McCann-Marschalk, and then, at the tender age of 27, he joined the agency that would become deGarmo, McCaffery. Eventually, he was invited to try out the corporate world as vice-president and creative head of Norton Simon, Inc. When I joined Norton Simon, I though I knew just about everything there was to know about advertising, McCaffery says. But here, reviewing all the advertising for this multibillion-dollar corporation, he learned what it was like to be the client sitting on the other side of the presentation board. With this new knowledge under his belt, McCaffery moved on to Revlon, where, as usual, he started a trend: the first cosmetics campaign to be fashioned around the idea of location as lifestyle was McCaffery's for Ultima II's Bordeaux collection. McCafferys campaign created such a sensation that department stores expanded on the theme, decorating everything from their windows to inside the entire store.

After leaving Revlon, McCaffery started his own agency, which eventually merged and became McCaffery & Ratner. Here, he made use of the understanding of both sides of the advertising world he had gained from his previous experiences: When a client hires an agency, he says, hes really taking on a partner. They both should have the willingness to grow together, to trust one another.

McCaffery has lived much of his life outside of advertising, hanging out with artists and designers such asAndy Warhol, Larry Rivers, Sheila McCaffery,R. O. Blechman, and Robert Motherwell and musicians like Chico Hamilton and Ben Webster. His mind is always working on some creative, informative concept. He thinks very quickly and ahead of what he is talking about, observes deHarak. In his correspondence withRichard Wurmanbetween 1967 and 1971, McCaffery worked on ideas to make flying time more entertaining. He proposed a series of destination films highlighting major cities around the world, to convey the way people are in their own habitatthe cities we visit are people, not just monuments, museums, and restaurants. This correspondence resulted in the film City/2 (city over two), which was shown at the Philadelphia Museum of Art in conjunction with an exhibit of the same name. The 12-minute film records the city from sunrise to sunset, or, as McCaffery describes it, a day in the life of the cityon, above, and below.

Even if a city is more than just its restaurants, McCaffery knows the importance of those restaurants nonetheless. He has designed the dcor, graphics, and advertising for some of the best places to eat in New York, including the Rainbow Room and the Rainbow Grill, Gallaghers 33, and LEtoile. His campaign for Windows on the World, Confessions of a Jaded New Yorker, which depicted the downtown skyline as a Rorschach inkblot, put the restaurants name on everyones lips.

In 1972, McCaffery created the Art Directors Club exhibitMaking New York Understandable, in which ADC members and other designers, writers, filmmakers, architects and planners contributed a variety of materialsincluding models, photos, films, books, and mapsrelated to McCafferys idea: The decay of the city increases as it becomes less understandable to its citizens, he explained.

Other of McCafferys high-profile projects include the IMAX filmAn American Adventure, with Dennis Weaver, which McCaffery wrote and directed, and the award-winning critical magazineOn Film, which he founded, designed, and edited. His published books includeto Watch a Parade(Harper) andNoses Are for Roses(McGraw-Hill).

McCafferys greatness as a visual communicator, deHarak has observed, lies in his ability to weave his words and images into a broad tapestry of ideas that speaks out with force and continuity to mass audiences. After almost 40 years of experience in advertising, McCaffery hasnt been seduced by the onslaught of mechanical gadgetry available today. To him, quality work still comes from pure thought. He says, Advertising changes only in terms of the tools we use to execute it. The essential challenge is still the same: to solve a marketing problem starting with a blank piece of paper and, eventually, an idea that no one has had before.