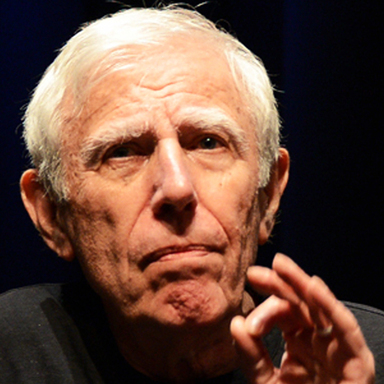 Bob Gill was born in New York. His father took off soon afterwards. His mother was a piano teacher. Gill, at five, was her first pupil. He began illustrating at about the same time. He had his first band at ten, played Bar-mitzvahs and summer resorts in the Borscht Belt at fourteen, and joined the musician's union the following year.

He left home at 17 to see the world. He got as far as the Philadelphia Museum School of Art, where he studied design and drawing. After two years there, and six months at the Pennsylvania Academy of Fine Arts, Gill returned to New York. He began freelancing out of an 8 x 10 room on upper Broadway with a bed, chair, upright piano, drawing table, and 32 orange crates. Gill showed his portfolio toAlexey Brodovitch, who told him to forget design and be a photographer, and toPaul Rand, who told him to "stay in this business." Gill's first job was a cover forInteriorsmagazine.

He was drafted in 1952 for two years. Although he rose to the rank of corporal, Gill was never even considered for the Army Hall of Fame.

He returned to New York to continue freelancing, this time with a telephone. He looked for work by building a primitive proof press and sending woodcuts to agencies and publishers. His illustrations began appearing inEsquire, The Nation, Seventeen, Fortune, Glamour, etc. In 1955 he was asked to design a title card for the CBS sitcom called "Private Secretary." He won his first ADC Gold Medal for it, and he got an answering service.

Until that time, Gill, along with most other designers, was preoccupied with aesthetics and fashion. He wasn't as interested in communication as he was in "good design." While working on "Private Secretary," he realized that fashionable typefaces and modern layouts looking like Mondrians were not as exciting or fulfilling as trying to invent an original image for every job, and that the most likely way of doing that was to forget all "good design" preconceptions and to let each new problem suggest a new solution.

In 1956, he started teaching at the School of Visual Arts one night a week, obsessed with "problem solving." Gill was unrelenting: "Tell me your idea. Don't show me a layout." Notice that he uses "idea," never "concept." Gill thinks that for an idea to qualify as a concept, it must be on the order of magnitude of the "Big Bang" theory. He also wrote and illustrated his first children's book, and he did his first film title. "Hollywood is a great place to do film titles, but I wouldn't want to live there," he said. By 1960, although he was well represented in all of the New York design shows and in many international design publications, he began to come down from his original high as a designer/illustrator/teacher. So he went to London on a whim, and stayed for 15 years.

He took a job as the creative director of an agency. It was a mistake-the agency, not London. London was perfect. He had a regular column in the trendiest magazine, one-man shows of his serigraphs in London and New York, did some children's books, and, together with the two brightest young designers in England, started Fletcher/Forbes/Gill, a design office, on April Fool's Day, 1962.

F/F/G soon outgrew their small mews studio and moved into a huge Victorian former gun factory on a canal. They started the Designers and Art Directors Association (D&AD), opened a second office in Geneva, wrote a book about their design ideas that sold over 100,000 copies, and found themselves in the center of the "Swinging 60s." As Fletcher said, "It was like shooting fish in a barrel." F/F/G began with two assistants and a secretary. Today, it's called Pentagram, with offices everywhere except Albania.

Gill resigned in 1967 to work independently again. The office was already getting too big for him. His first job was to design the cover ofWonderwall, the Beatles' first record on their label, Apple. He also began teaching at the Royal College of Art. In 1968 the Stedelijk Museum in Amsterdam gave him a one-man show and Lund Humphries published his portfolio. The following year, he went to Spain as a visual consultant to Joe Losey, the director, to work on a feature film.

During the next seven years, Gill spent half his time designing, teaching, and writing children's books, and the other half producing, writing, and directing industrial films for a Singapore airline, a Swiss charity, an Italian typewriter company, an English glue manufacturer, a German aircraft maker, an American hotel chain, and a multinational pharmaceutical corporation, among others. By 1975, London seemed very quiet compared to the way it was in the 60s.

And then, he and an army buddy, Robert Rabinowitz, a painter, were asked to write and design a multimedia history of the 60s, with a Beatles' score. Gill asked "What is multimedia?" They used 19 projectors with 3,000 slides, 2 film projectors, each with a half-hour documentary, a backstage band, and 4 Beatles clones onstage singing 29 Beatles' songs.Beatlemaniaran for three years on Broadway and spawned several companies that toured for another three years.

Gill's next project, also with Rabinowitz, was commissioned by Lincoln Center to celebrate its 20th anniversary. They covered the 175-foot faade of the Metropolitan Opera House with five movie screens (one for each arch) 70 feet deep. Three projectors on a truck parked on Broadway showed a split-screen history of Lincoln Center every summer evening, weather permitting. The film was called,Variations for symphony orchestra, contralto, two sledge hammers, string quartet, jazz band, pneumatic drills, two opera companies, ballet dancers, flue, theatre company, audiences, and three projectors. Timemagazine said, " ... indisputably the biggest and one of the most pleasant shows in New York." Another more colorful critic called it, " ... the most spectacular event since Leni Riefenstahl did it for Hitler."

After the success ofBeatlemania, Gill and Rabinowitz were invited to do a history of Rock n' Roll for Broadway. Rock n' Roll: The First 5,000 Years opened in 1980. It closed, as far as Gill can recall, in 1979. The kindest review it received was from the show's lawyer, who said, "Well, I liked it."

Forget all the rules you ever learned about graphic design. Including the ones in this book.was published in 1981. It became required reading in many design classes in the United States and Europe. The title and the chapter headings reveal a lot about Gill's ideas about design:"The problem is the problem," "Interesting words need boring graphics," "Think first, then draw," " Boring words need interesting graphics," "Less is more,"and"More is more".
As of 2014, Gill is still working independently, designing and illustrating, still lecturing around the world, and still writing books for designers and children. Hes now living in New York with his wife, New York Public Radios Sara Fishko. Their son, Jack is a computer programmer for
Facebook and their daughter, Kate is about to graduate from Oberlin College. His latestbook is, Bob Gill. so far.