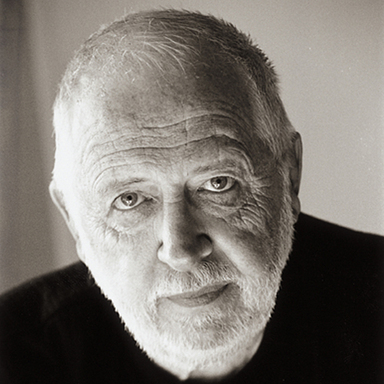 If Bruce McCalls work could be said to have a trademark, it would be the sly and pokerfaced blending of reality with fantasy to create impossible but almost credible objects, scenes and worlds, usually in the cause of satire, and often historical satire.

A pre-adolescent Bruce McCall won the five-dollar first prize for watercolors at the 1947 Norfolk County Fair in his native Simcoe, Ontario, employing the corny trick effect of a boat reflected in still water. It was the last humor-free illustration he ever did, and from then on there was no stopping him. 23 years elapsed, however, before a McCall illustration saw publication, and 22 years more before he managed to make art more than a sideline. He dropped out of high school to apprentice in a tiny commercial art studio in Windsor, Ontario, and when the company folded and he fobbed himself off to a Toronto studio as a commercial art pro, he astonished his co-workers and himself by hanging on for six giddy weeks before being found out and bounced. It was at this point that McCall started over, this time as a writer. It would be ten years before he picked up a paintbrush again.

The idea that both could be folded into one career arrived remarkably late. The first inkling came in 1970, when McCall was tricked into painting the illustrations for aPlayboyhumor piece co-authored with a friend, and liked it. Deliverance arrived soon afterward, via a chance encounter withThe National Lampoon, then at its peak. His humor sensibilities perfectly meshed with the editorial tone of that iconoclastic and free-spirited magazine, which was soon encouraging McCalls double-barreled creativity and allowing his idiosyncratic enthusiasmszeppelins, steamships, Fifties carsto devour huge amounts of space in issue after issue. Destiny had knocked at last. McCall jumped from a lucrative advertising career to the humble but glorious freelance life.

Liberation unlocked an imagination already predisposed to the surreal. If McCalls work could be said to have a trademark, it would be the sly and pokerfaced blending of reality with fantasy to create impossible but almost credible objects and scenes and worlds. Usually in the cause of satire and often historical satire, a genre McCall has marked out almost exclusively for himself. With none of his peers protesting.

Television was beating out of the magazine world; in the fall of 1975 Saturday Night Live came to do on the tube what theLampoonwas doing the old-fashioned way. Americas always modest appetite for satire was sated by SNLs broad and almost vaudevillian brand. TheLampoonwas finished almost overnight.

Back into advertising. It took years for him to recover and summon the nerve to approachThe New Yorker, a lifelong grail. That magazines historical tolerance for the eccentric, to his shock, extended to him. He began as strictly a writer of humor casuals, but on the advent of Tina Browns editorship expanded to covers and evolved into an in-house jack-of-all writing and illustrating trades. With The New Yorker as his flagship, he also became a frequent contributor of satirical art to Vanity Fair and innumerable other major publications, with occasional dips into advertising illustration here and in Europe. He has published two collections of his work, Zany Afternoons (1982) and All Meat Looks Like South America (2003), an original book satirizing the 1950s, The Last Dream-O-Rama. and a serious memoir, Thin Ice, published in 1997 and later made into a documentary by the National Film Board of Canada.

Bruce McCalls singular style of illustration is owed in part to a boyhood awash in popular magazines likeThe Saturday Evening Post,Colliers,LIFE,LookandFortune, where product realism amid lifestyle fantasy, as depicting in thousands of adsall of them illustratedseeped into his synapses. Its owed in larger part to being entirely self-taughtwhich, when you dont know anything, teaches some exhilarating lessons. He still works exclusively in gouache because that was how they did it in 1955 in that commercial art studio in Windsor.

The above explains why McCalls illustrative style so seldom ventures beyond a laborious realism often described as thirties-like or nostalgic, as if it were a conscious choice among millions of others. The truth is that he couldnt do thing any differently if he tried.

Luckily for him, he hasnt.