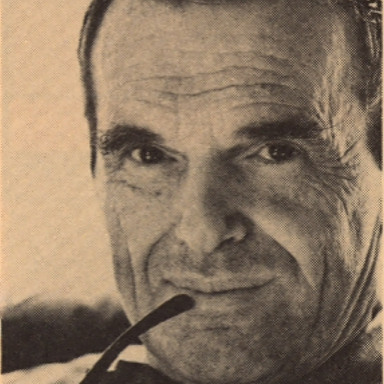 "Let a man get knowledge or buy a rope," Diogenes Laertius advised. It is questionable whether or not Charles Eames knew of this biographer of the Greek philosophers, but his words are doubly appropriate here in this posthumous celebration of the American architect and designer, for Eames was a diligent practitioner of the Greek's credo. In this Age of Communication facts and information of all kinds are instantly and almost miraculously available to us all, true knowledge to only a few, because to acquire it one must pursue the linkages between the plethora of individual itemsbits, if you willof information.

With good cause the last major exhibition of Eames's work at the University of California, Los Angeles, 1976, was called "Connections: The Work of Charles and Ray Eames. In the narration of a film on the Eames contract storage system (ECS), Eames wrote: "The details are not details. They make the product. The connections, the connections, the connections." Connections between what? Between such disparate materials as rubber and steel, between such apparently unlike disciplines as physics and painting, between people of different callings: mathematicians and poets, philosophers and business executives. A close student of Eames's work states: "The Eames design practice might be defined as the art of solving problems by making connections."

What were the connections in Eames's personal life? Born in St. Louis, Missouri, in 1907, he left Washington University there at the end of his second year and opened an architectural office. The Great Depression sent him to Mexico for a while and when he returned to St. Louis he opened a second office, with Robert Walsh, supplementing residential architecture commissions with the design and production of furniture and objects, mostly religious, with his friend, Emil Frei. In 1936, Eliel Saarinen offered him a fellowship at Michigan's Cranbrook Academy of Art, and later a teaching post.

His fellow instructors included Saarinen's son Eero, who, with Charles and the young sculptor-painter, Ray Kaiser, helping out on presentation drawings, submitted designs to the Museum of Modern Art's "Organic Furniture Competition" in 1940.

Their designs won the two first prizes, but it was not possible to manufacture them under the known conditions. Charles and Ray Kaiser married and moved to Los Angeles. As husband and wife they were full collaborators from then on. In California, at the start, Charles worked as a set designer at MGM studios; by night he and Ray experimented with wood-molding techniques. In 1942 early in World War II they were commissioned by the Navy Department to produce molded plywood splints they had developed later making aircraft parts including parts for special gliders. In those light, closely thought-out products one can easily see the beginnings of the plywood chair groups, the first of which appeared in prototypes in 1946 when the Museum of Modern Art held an unprecedented one man show of Eames furniture.

That exhibition caused the Herman Miller Furniture Company to seek out Eames as a consultant, a move urged on them by their design director, George Nelson. By that time Charles and Ray had moved out of the small apartment in West Los Angeles where they had carried out their pioneering research and set up shop in a huge garage in Venice which remained Eames's headquarters until his death in 1978. He died in his native St. Louis while there to consult with an architectural firm.

Today, of course, the whole world is familiar with the term "Eames chair" and the revolutionary concepts it represents, but is less aware of Eames's designs and accomplishments in a score of other fields. Eames early on turned his attention to the making of films. "A Communications Primer, begun in 1951 and completed in 1953, was one of the first and is still one of the most successful popular interpretations of communications theory. It grew out of Eames's conviction that computer technology and related game theory were about to become indispensable and inevitable in architectural planning. There was nothing unusual about believing that, but it was very unusual for a designer to believe it in 1951 when Norbert Weiner's cybernetics were just becoming known and the IBM company was just starting to flex its electronic muscles.

Parallel to the motion picture workmovies being a series of connected still pictures, basicallywas Eames's exhibition work, typified in 1961 by "Mathematica: A World of Numbers...and Beyond, an IBM-sponsored exhibition at the Museum of Science and Industry in Los Angeles. "Mathematica" brought together a large number of features that had come to characterize Eames's work generally: it was loaded with detail, including a massive "history wall" that related significant mathematical developments to each other and to developments in other fields. The "history wall" became a kind of Eames trademark for exhibits and again illustrates his fundamental belief in the over-riding importance of providing linkages. The "Scholar's Walk" at the New York World's Fair in 1964 followed in this tradition.

Always an innovator, when consulted by MIT as to the best way to infuse their technologically-heavy curriculum with art, Eames rejected the idea of additional art courses or fine arts programs. Instead he designed an alternative situation, a program for the enrichment of the studentsand the Universityby exploring communications capabilities to the point where they could experience the aesthetic possibilities of their own discipline, a program design which has been adopted by many other schools of technology.

The MIT proposal, although difficult to exhibit, is no less a design product than the chairs, the tables, the stretchers, the houses, the toys, the films and the exhibitions which came from the laboratory-studio of Charles and Ray Eames. In his later years, much of Charles Eames's activity was devoted to designing situations rather than products, dealing with social issues in India, the economy in Puerto Rico, the public responsibility of the Metropolitan Museum of Art, the structure of "Headstart" programs.

Of his total career and talent, Eames has been described as "irreplaceable" byPaul Randand, at greater length, byGeorge Loisin these words: "Every young designer in the fifties and sixties worth his salt worked sitting in an Eames chair, including me. [] Beyond that close contact with Eames, his (and her) analytical approach to putting complicated ideas on film in a communicative but joyful way was an inspiration whenever I approached any job that truly needed homework. Their solution was always put down in a way that looked entirely undesigned.Thatsart direction!"