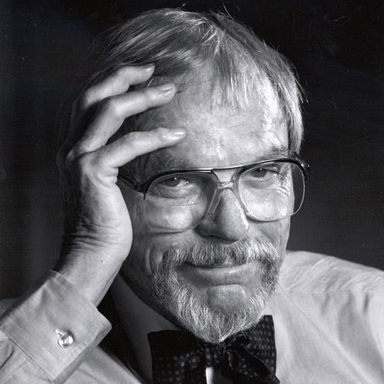 You dont draw Bugs Bunny, you draw pictures of Bugs Bunny, a child once explained to animation director Chuck Jones. Thats a very profound observation because it means he thinks the characters are alive, which, as far as Im concerned, is true, says Jones who believes, Animation isnt the illusion of life; it is life.

In a career spanning over 60 years, Jones has made more than 300 animated films and has earned two Academy Awards: ForScent-imental Reasons(1950) andThe Dot and the Line(1965). He received an Honorary Oscar in 1996, three Honorary Doctorates, most recently by the American Film Institute in 1997, and the Directors Guild of America Life Membership Award.

Jones respects the intelligence and humanity of children, We must first maintain, nurture, and insure the ability to recognize and communicate the characteristics we, ruefully, recognize in ourselves. We must never write down to children. We should take our work, but not ourselves, seriously.

Born September 21, 1912, in Spokane, Washington, Jones grew up in Hollywood, California. Living a few blocks away from Charlie Chaplin's house, he spent his time as a child extra in Mack Sennett comedies.

At the Chouinard Art Institute in Los Angeles (now the California Institute of the Arts), Jones studied with Donald Graham, who trained the early Disney animators. After graduating, Jones drew pencil portraits for a dollar apiece on the street. In 1932, he got his first job in the fledgling animation industry as a cell washer for former Disney animator, Ubbe Iwerks.

In 1936, Jones was hired by the Leon Schlessinger Studio (later sold to Warner Brothers) and was assigned to Tex Avery's animation unit. The team produced "Looney Tunes" and "Merrie Melodies" in a back lot building nicknamed Termite Terrace. Here he learned, "An animator must have only three thingsa pencil, a number of sheets of paper, and a light source; with these he can animate, without them he cannot."

At 25, Jones directed his first animated film,The Night Watchman, released in 1938. Approximately 5000 animation drawings were used for the six-minute cartoon. As director, he timed the picture, finalized all the writing, produced over 300 layouts, and directed the art design, music, sound effects, and animation. Today he remains the same uncompromising craftsman, "In all the years I've done Bugs, I've never done the same run, because each time Bugs runs, he runs for a different reason."

During World War II, he directed Army training films featuring Private SNAFU, a popular 1940s character, and he directed a reelection film for President Franklin Delano Roosevelt. Heading his own unit, Jones remained at Warner Brothers Animation until it closed in 1962, except for his brief stint at Disney Studios in 1955 during a hiatus. He then moved to MGM Studios where he created new episodes for the Tom & Jerry cartoon series, and also co-wrote, co-directed, and produced a full-length feature,The Phantom Tollbooth.

In 1966, Jones directed one of the most beloved holiday specials ever produced How the Grinch Stole Christmasby Dr. Seuss. The special earned him a Peabody Award for Television Program Excellence, an accolade also bestowed upon him forHorton Hears a Whoby Dr. Seuss (1971). In 1972, Jones served as a vice president of ABC where he made several animated films for television includingThe Cricker in Times Square(1973). He then moved to CBS where he wrote, directed, and produced animated adaptations of Rudyard KiplingsRikki- Tikki- Tavi(1975) andMowgli's Brothers(1976).

In 1992, Joness mini epic,What's Opera, Doc?(1957), which featured a Viking Elmer Fudd singing "Kill the Wabbit" to the tune of Wagner, was inducted into the National Film Registry as, "... among the most culturally, historically or aesthetically significant films of our time."

In the late 1970s, Jones began to create limited edition images depicting scenes from his most enduring cartoons. His art has been exhibited at more than 250 galleries and museums worldwide, including a one-man film retrospective at The Museum of Modern Art in New York.

Jones's work is still a huge influence on creators. Steven Spielberg says, "Chucks originality, pacing, and humor have no peer. Hes the top toon in town." Ringling Brothers, Barnum and Bailey Circus Clown College uses Road Runner cartoons in its gag-development class. Film historian and critic Peter Bogdanovich explains the unwavering appeal of Jones's work, "It remains, like all good fables and only the best of art, both timeless and universal."

Please note: Content of biography is presented here as it was published in 1998.