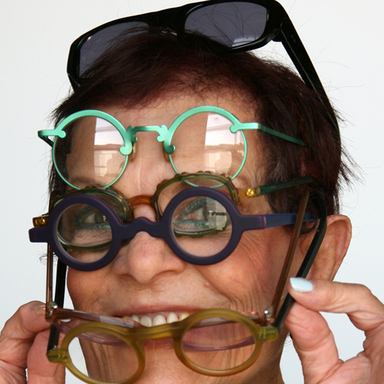 Deborah Sussman pioneered the field called Environmental Graphic Design. Her contributions to urban branding have been internationally applauded, and influenced generations of designers.

Her education and training began with scholarships to Bard College and the Institute of Design (ID) in Chicago. At 22, she was invited to join the office of Charles and Ray Eames. During her 10-year affiliation, she played a significant role developing graphics, toys, exhibits, showrooms and films.

She has studied and worked in France, Germany (on a Fulbright Grant), Italy, Mexico and India, always photographing street life and
indigenous cultures.

Early on, as a member of Los Angeles growing art community, she designed a series of catalogs for the Los Angeles County Museum of Art. One, along with a video interview of her, is featured in the ongoing LACMA exhibit California Design (part of the huge Pacific StandardTime program).

Having established her own office in 1968 (later incorporated as Sussman/Prejza in 1980 after marrying Paul Prejza), she continues to practice today. Her work is populist, exuberant and informed with a special gift for color. S/P and Deborah have collaborated with some of the finest architects of our times, including Frank Gehry, Philip Johnson, Foster Partners, GGN, Olin, MRY, Barton Myers and SOM.

Deborah and S/P led the design team globally celebrated for the 1984 Olympics in Los Angeles, together with the Jerde Partnership. Considered a turning point in the history of the Olympic Games, the look of L.A. 84 appeared twice in TIME, influencing all subsequent Olympics.

S/P has, and continues, to design venues in the cultural sector, including the New Jersey Performing Arts Center, Seattles McCaw Hall and MoAD (Museum of the African Diaspora) in San Francisco.

Recent and ongoing projects include branding the new Grand Park in downtown L.A.; design concepts for the L.A. Metro system; the Hollywood W Hotel; campuses at UC Berkeley and UCLA; and a global interior branding system for a long-term international client as well as several U.S. embassies.

Deborah spearheaded the much-applauded recent Eames Words exhibit at the A+D Museum in L.A. Her curatorial and design leadership provided insight into the daily lives of Charles and Ray. Instead of looking as though the Eameses had designed it, this show revealed their delight in the uncommon beauty of common things, but in a truly contemporary setting.