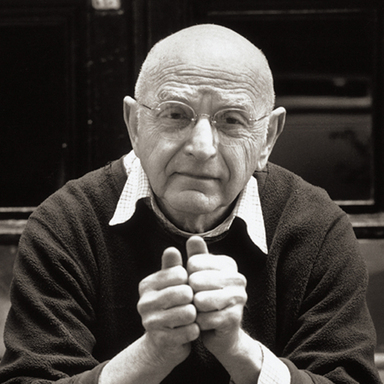 Michals repeatedly emphasizes the importance of capturing not the appearance of a situation, but the experience, not how it looks, but how it feels. Photography should not be reading about an emotion, but feeling it oneself. He says, To photograph reality is to photograph nothing.

Born in 1932 in McKeesport, Pennsylvania, Michals graduated from the University of Denver with a B.A. in 1953, and since that time his awards and accomplishments are almost too numerous to count. After college, Michals began working as a magazine designer, then, during a trip to Russia, started taking pictures. As a photographer, Michals entered a world in which the medium was dominated by documentary and portraiture. Michals interests in photography lay elsewhere.

Influenced more by poetry and painting than other photographers, his exhibitions featured narratives, told in a sequence of shots. Radical at the time, Michals said that at his first show at the Underground Gallery in New York City in 1963, half the people walked out. Since that time, his work has been shown in twenty countries, and is collected in forty-one museums in twenty-three states and twenty-eight museums abroad. He holds an honorary doctorate from The Art Institute of Boston and one in Bratislava.

Michals never learned traditional photographic methods, and that lack of education has contributed, he believes, to his success. In his own words, he never had to unlearn anything and was therefore always free to be different. He was the first photographer to use double exposure, and often altered the images with paint and writing to further enhance the images. In an interview, Michals compared most photographers to newspaper reporters, content to remain impassionate eyes, and himself to a short-story writer: one who carefully and self-consciously shapes the image being captured.

In interviews, he compares his artistic approach to Eastern religion, philosophy, quantum physics, painting, and, significantly, poetry. His 1996 book,Salute, Walt Whitman, is an homage documenting the poets influence on his life and work. Many of his photographs also reveal a Surrealist sentiment, juxtaposing disparate elements and layering several images on top of one another. The result is far from representational, but rather enters the world of the imagination, the world of dreams and nightmares, and the places where humans ask the most difficult questions about themselves. Michals explorations of the subconscious led not only to surrealist work of his own, but to appropriately experimental portraits of Surrealist masters Magritte and Joseph Cornell. Nevertheless, his work presses beyond questions of the subconscious to explore the realms of spirituality, the human condition, and life after death. His photographic sequence The Human Condition shows a man waiting for the subway gradually merging into a galaxy of stars. Michals says, Since we spend more time not being than we do being, then I find not being utterly fascinating. In a universe of three trillion million years, we spend eighty years alive, a nanosecond of breath which is our consciousness, and we spend this time unexamined.

He is particularly emphatic about the unexamined life when it comes to his contemporaries, particularly a group of photographers he refers to as fartsters, those more obsessed with the media and celebrity than questions of what it means to be alive. Michals is not interested in capturing a moment and letting it speak for itself, always believing there is something more, something deeper, in every situation.

If we use observable fact to dictate what the possibilities of life are, then we are stuck with those that believe the earth was flat. Its like saying when we shut off the radio, the music no longer exists because it only came from the tubes within.

You cant go through life bowing your head and accepting what someone in supposed authority tells you. Thats being an automaton. The great marvel of being alive is that one does have the right to ask questions and be audacious in the questions.