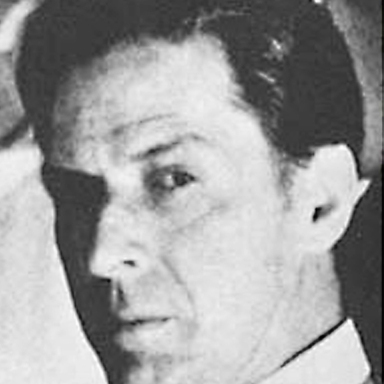 In 1915, E. McKnight Kauffer, an impeccable, young American illustrator just arrived in London, was commissioned for his first poster for the city's Underground Railway, which was starting an adventurous corporate campaign, treating stations like shops and advertising the delights found en route, with the work of fine artists and painters and 'new' typography.

Kauffer's revolutionary work for the Underground, a client he retained for some years along with many prestigious others, precipitated a brilliant London careerone which comprised the largest portion of his life before his return to the U.S. in 1941.

He was born in Great Falls, Montana, and studied painting in Chicago (he was greatly influenced by the European art seen in the Armory Show there); he studied in Munich and Paris. Kauffer had style. He had a shock of red-brown hair, a tall frame, slightly stooped shoulders, and a hawk-like nose.

A man of parts, he made an indelible impression on all who came in contact with him as he combined creative ability with an elegant demeanor. In London, Sir Francis Meynell of Nonesuch Press, who early became a patron and life-long friend, described him as "exquisite in face and figure and manners."

E. McKnight Kauffer can rightfully claim membership in the Hall of Fame for perhaps one overall contribution that affects a great body of our work today and one specific milieu. First the overview: he was a pioneer. InPrintMagazine's tribute to Kauffer as one of the great graphic designers of the 20th century, we are reminded that he was an artist in the "world of commerce" before there was a graphic profession. He would prove, in the words of Keith Murgatroyd inPrint, that "complete creative fulfillment could be achieved without personal compromise by working with industry." His special contribution was in posters where, in paintings and design, he reduced complex material to forceful, economical, expressive modern statements, his only rival being the greatCassandrewho was innovating at the same time in France.

As a young man still in America, he had been employed in a San Francisco bookstore where he did a lot of reading and, as fortuitous chance would have it, a customer became a sponsor and sent him to art school. While at school, odd jobs included, among others, washing dishes; he later painted scenery with a traveling theater company. He was twenty-four when he arrived in London following his painting studies. It was the outbreak of World War I.

Kauffer had had hard times as a youth but his career and influence began to blossom. One of the few extant examples of the early work of Kauffer is a poster for the Labour Party'sDaily Herald(he disavowed ownership of the typography). Of triangles and parallelograms, in three colors, it is considered the first Cubist poster. A variety of posters, many experimental, emerged to delight the public during a decade for such clients as Derry and Toms, a store in Kensington. In 1928, he was commissioned for Burton's "Anatomy of Melancholy," his first book for Sir Meynell's quality Nonesuch Press. During the years of the 1920s as a freelancer he had also put his hand to everything from booklets, ads, timetables, wine lists, Christmas cards, even scenery for ballet. In 1929, he was asked to join Crawfords, the great London agency, and worked with Ashley Havinden as his art director.

After leaving Crawfords in 1931 he was commissioned by Shell-Mex for a lorry bill. ShellMex and BP Limited consolidated and Jack Beddington, later Ministry of the Interior, became another valued friend. Perhaps Kauffer's most famous works are for the London Underground, Shell-Mex, and BP, Ltd.

McKnight Kauffer was made an honorary Fellow and sat on the Council of the Society of Industrial Arts in London. He became a member of the faculty of the newly formed Royal Designers for Industry (1936), and his citation read: "for eminent services to commercial art.

He was part of the group of artists in the early part of our century steadfastly committed to new and experimental design principles. Many feel that, more than any other American artist, he understood the avant garde painting of the time. In the 1930s, considered by many the golden era of the poster, Londoners in the 'tubes' would recognize Kauffer's posters. One of the aspects of his extraordinary oeuvre was his interpretation of machine forms, but his was an organic style, not easy to define as he continually changed his approach. At the heart of the work was a personal integrity, which added immeasurably to the teamwork between artist and client.

He returned to the U.S. and never really received the recognition he had found earlier in England. He did, however, work for many American companies. He died in New York City in 1954.

In 1936, the Museum of Modern Art had given Kauffer a one-man exhibition. A tribute was mounted after his death in a commemorative show by the Royal Society of Arts. T. S. Eliot opened the exhibition, which was at the Victoria and Albert Museumwhere so much of Kauffer's work really belongs.

Please note: Content of biography is presented here as it was published in 1976.