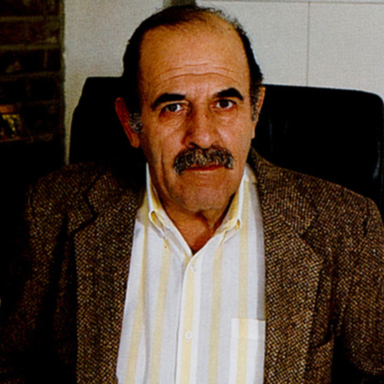 Born in Brooklyn, New York, Edward Benguiat got acquainted with design and showcard lettering when he was nine years old. His father was display director at Bloomingdale's and he had all the drawing tools a little boy could want. Edward would play with his father's pens, brushes, and drafting sets, and learned about sign painting, showcard and speedball lettering.

Ed received the usual education. During World War II, he wasn't old enough to enter the armed service, so with a forged photostat of his birth certificate, he enlisted in the Army. After his stint in the Air Corps he traded his airplane control stick for drumsticks and continued the burgeoning percussionist career he had started before the war.

Ed became established as a talented progressive Jazz musician under the name Eddie Benart, and played with numerous big bands such as Stan Kenton, Claude Thornhill and Woody Herman, but preferred the New York gigs on 52nd Street, particularly at The Three Deuces. "It kept me in town; going on the road with big bands was a drag, and tough." During that time a Metronome magazine poll picked Ed as the number three sideman/drummer in America.

At the School of Visual Artswhere about thirty years agoSilas Rhodesgave him a jobEd compares graphic design and typography to the rhythm and balance of a musical composition.

While playing on 52nd Street, Ed made use of the G.I. Bill and enrolled at the Workshop School of Advertising Art. He wanted to draw nudes like some of the well-known illustrators. His drawing teacher advised him to quit. Benguiat persisted. His first job as an illustrator was as a cleavage retoucher for a movie magazine. "You might think I was adding to the bust. No way! I was taking the cleavage away," he said, indicating the reaction of the motion picture industry to the crackdown on obscenity in movies. It was obvious that Ed couldn't draw too well, so he went in the direction of layout, design, typography, and calligraphy. He became Paul Standard's prodigy. Once out of school, Ed established an impressive career as a designer and art director at a number of large and small publishing houses, studios, and ad agencies. Opening his own firm did not take too long. Enter Photo-Lettering Inc. and Ed Ronthaler. They saved Ed's life financially by making him art director.

One way or another, just about everyone in the graphic community has had some contact with Ed. He's a neighborhood guy. Admittedly, most know him as the guy who sat in his cramped, cluttered office on 45th Street that had just enough room to swing his pen or brush.

Benguiat's impact on the type community involves more than just design. He played a critical role in establishing The International Typeface Corporation, the first independent licensing company for type designers. Ed and ITC jump-started the type industry in the late '60s and early '70s. Founded in 1971 by designersHerb Lubalin,Aaron Burns, and Ed Ronthaler, ITC was formed to market type to the industry. Lubalin and Burns contacted Benguiat, whose first ITC project was working on Souvenir. Originally a singleweight face designed by Morris Fuller Benton in the 1920s, Benguiat redrew it with additional weights and italics. Now, Souvenir is the face everybody loves to hate. It was lTC's best seller, and Ed did a beautiful job. It's not his fault it's become a clich.

Ed became a partner with Lubalin in the development of U&lc, lTC's award-winning magazine, and the creation of new typefaces such as Tiffany, Benguiat, Benguiat Gothic, Korinna, Panache, Modern No. 216, Bookman, Caslon No. 225, Barcelona, Avant Garde Condensed, and many more. This added to the more than 400 faces he'd already created for Photo-Lettering. With Herb Lubalin Ed eventually became vice president of ITC until its sale to Esselte Ltd. Ed continues to design faces for lTC, including, most recently, Edwardian Script. He is also known for his designs or redesigns of the logotypes for Esquire, The New York Times, McCalls, Readers Digest, Photography, Look, Sports Illustrated, The Star Ledger, The San Diego Tribune, Garamond AT&T, A&E, Este Lauder, U&lc...the list goes on and on. You name it, he's done it.

Benguiat has a beef. It's that too many young designers substitute technology for talent. "Too many people think that they've got a Mac and they can draw a logo or a typeface. You have to learn to draw first. The computer won't do it for you. Although he laments that student designers show more interest in learning the computer than mastering the art of designing letterforms, Benguiat is growing optimistic about the technology behind computer-assisted type design.

Professor Benguiat is a member of the Alliance Graphique Internationale and a past president of the Type Directors Club. In 1990, he received the gold medal for excellence from the New York Type Directors Club, and won the prestigious Fredric W. Goudy Award. Benguiat continues a busy lecture and exhibit circuit that takes him to Paris, Berlin, Brazil, Slovenia, London, Chicago, Washington, and New York, where he is an instructor at The School of Visual Arts. In 1995, SVA honored him with Teacher of the Year.

Please note: Content of biography is presented here as it was published in 2000.