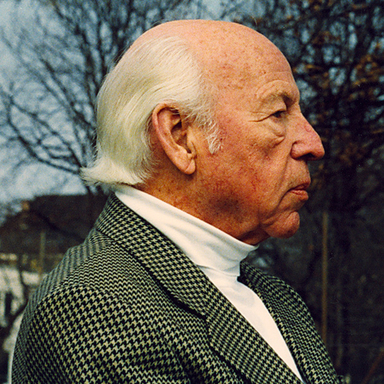 If Nitsches name is unfamiliar to some who pride themselves on being knowledgeable about the history of graphic design, this can only be attributed to Nitsches reluctance to court publicity and to his belief that his work should speak for itself. In an essay about the designer in the late 1950s, P. K. Thomajan wrote, Self-effacement, [Nitsche] finds, keeps the blighting shadow of the ego out of ones work.

Born in Lausanne, Switzerland, in 1908, Nitsche studied at the Collge Classique of Lausanne and the Kunstgewerbeschule in Munich, and is fluent in French, German, and English. In the early 1930s, he designed covers for such avant-garde publications asSimplicissimus, Jugend, andDer Querschnitt, a multilingual cultural journal that inspired an American publication, Ricochet. Immigrating to the United States in 1934, Nitsche headed for Hollywood, then a small town, quickly developing friendships with such creative professionals as composer Frederic Hollnder, Marlene Dietrich, and MGM special-effects director Slavko Vorkapich. In 1936, Nitsche moved to New York, where he began producing illustrations and covers for many major American magazines, includingLife, Look, Harpers Bazaar, Town and Country, Fortune, House and GardenandVanity Fair.

Keeping a hand in the cinema, Nitsche was responsible for developing memorable advertising and promotional campaigns for Twentieth Century FoxsAll About EveandNo Way Out, andThe Egg and I, The Imposter, and others for Universal. In the late 1940s, Nitsche created a stunning newspaper campaign for Ohrbachs that gave the off-price New York department store unexpected uptown cachet. He designed subway posters for the New York Transit Authority, redesigned the corporate image for Filenes of Boston, produced catalogues and over 200 classical-album covers for Decca Records, and won a gold medal from the Art Directors Club for his engaging ad campaign inThe New Yorkerfor the Broadway production ofThe Respectful Prostitute. Any disappointment he felt about not having attended the Bauhaus was assuaged when he heard thatLszl Moholy-Nagyhad asked, Who is this guy doing the Bauhaus in New York?

Around 1945, Nitsche moved to Pound Ridge, New York, and began commuting between the city and the country. In 1947, he followedHerbert Bayeras art director and vice-president in charge of design at Dorland International in New York, a cosmopolitan advertising agency with branches in several major European cities. But after two successful years there and a brief stint as art director ofMademoiselle, he realized that conventional office life was not for him. Acquiring an old Victorian mansion in Ridgefield, Connecticut, Nitsche updated it with thrusting terraces, cantilevered porches, and a Plexiglas rooftop bubble over a high-gabled studio where he could work. He became a consultant to Standard Oil of New Jersey, designing books, brochures, and international advertising, as well as taking on special projects. He also became a design and type consultant to New Yorks Museum of Modern Art, and designed a series of award-winning advertisements for Container Corporation of America.

Nitsche's historic relationship with General Dynamics began in 1953, when he started working on the General Dynamics account while at Gotham Advertising, a small Madison Avenue agency. Both Nitsche and General Dynamics president John Jay Hopkins felt constrained by the customary agency situation, however. The company was expanding rapidly, gearing itself for both defense and civilian needs, and in the spring of 1955, Hopkins summoned Nitsche to create, with only a few months notice, an exhibit for the International Conference on the Peaceful Uses of Atomic Energy in Geneva. Nitsche had to create an exhibit that would do justice to the company without revealing anything specific, as its work on the first atomic submarine, the Nautilus, was still secret. Nitsche met the challenge, designing an exquisite lithographic series of six symbolic Atoms for Peace posters, each in a different language. Printed in Switzerland, they had an impact around the world. Appointed art director of General Dynamics, Nitsche went on to design two more series of posters, in 1958 and 1960, as well as the companys corporate image, its annual reports and advertising, and, ultimately, a 420-page book of its corporate history, Dynamic America, which was published by Doubleday. The books dense and richly imagined layout was so inspirational to publication designer Walter Bernard when he arrived in New York about the time it appeared that he would later acknowledge it as the single most important influence on my work.

I'm working with fantasy," Nitsche told an interviewer, "with an idealistic image of the future, in which we are more or less involved." The image, he explained, must above all be clearly stated. "I do not want to be obscure. You know, one might easily get carried away by the science-fiction temptation of this subject matter. What I am concerned to do is establish it with a certain classicism. I would hate to have to apologize for a design, to have people puzzle and ask, What is it?

Nitsche, who describes himself and his wife Renate as nomads, moved back to Geneva in the early 1960s. There, after founding ENI (Erik Nitsche International), S.A., he designed and researched the 12-volumeA History of Music, which was published in three languages. From 1965 to 1980, Nitsche lived in Paris, working on special projects for Hachette, including researching and designing the vastLpope Nationale dun Sicle, a five-volume encyclopedia about the last 100 years, with over 2,000 color illustrations; he also painstakingly created the Infocard and Info-map systems, which are as yet unproduced. Nitsche spent the next decade and more in Munich, designing postage stamps for the German Ministry of Communications, and at the same time creating more than 300 Philatelic First Day covers for the Unicover Corporation in Cheyenne, Wyoming. He returned to the United States in 1996.

In commenting on Nitsches book design,Steve Hellercould be summing up the designers entire body of work and the strengths that reveal themselves throughout when he says, There is a simplicity and elegancethat brings together a lot of complex information and allows it to be absorbed without being reducedMuch of his work prefigures what is happening todayconceits of layering, a marriage of abstract and real. But even when organizing great masses of material, Heller notes, Nitsche leaves nothing cold. He is a complete humanist.