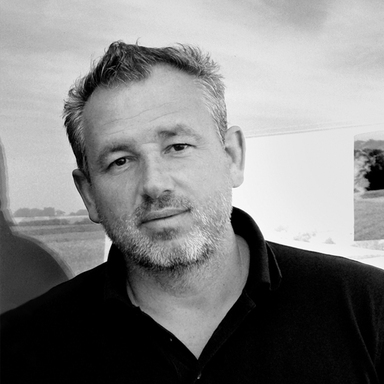 As the founder and creative director of Baron & Baron, Fabien Baron has crafted identities for the fashion, cosmetic and fragrance worlds most visible and influential brands. Barons singular vision is evident in a broad range of award-winning advertising campaigns, package designs, logos and graphics. Baron has also applied his talents to the design of prominent magazines and books, and is renowned for his photography, as well as for directing ground breaking television commercials and music videos.

Baron was born in Paris in 1959 and studied at the Ecole des Arts Appliques. He moved to New York in 1982 and shortly thereafter, was hired as creative director for Barneys, New York. In 1988 Baron redesigned Italian Vogue under editor Franca Sozzani and two years later he became creative director of Interview magazine. After founding Baron & Baron, Inc. Baron relaunched Harpers Bazaar commencing a seven year partnership with late editor-in-chief Liz Tilberis. Simultaneously, in September 1992, Calvin Klein hired Baron as creative director. That same year for Madonna, Baron art directed the arresting and provocative Sex book. To the present day, Baron & Baron continues to shape the image of the brand creating iconic print, television and package designs for fashion and fragrances. From 2000 to 2002, Baron worked as editor-in-chief and design director of Arena Homme + . In 2001, he debuted his first residential furniture line with Cappellini and in 2002 Baron introduced a contract furniture line with Bernhardt. The next year he became the creative director of French Vogue under editor-in-chief, Carine Roitfeld. In October 2009, Baron rejoined Brants publication Interview and was named Editorial Director. Baron continues to work on a broad range of assignments for a select group of international clients.