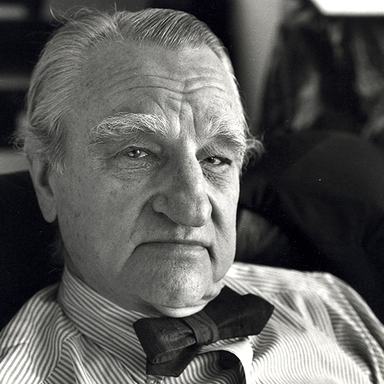 Countless people are probably asking themselves the following question: "Who the heck is Frank Zachary?" If ever there was an unsung hero who totally epitomizes the specialized craft of magazine editing and art direction, or as he puts it, "graphic journalism," Frank Zachary is that hero. He is living proof of the old geometry theorem, "The whole is equal to the sum of its parts." Indeed.

Born in 1914, the son of Croatian immigrants, Frank Zachary grew up near Pittsburgh, Pennsylvania wanting to become a writer. His mind loved to wander beyond the confines of the local steel mills to poetry and tales of science fiction. At the age of 18, Zachary gathered together a portfolio of short stories he'd written and took them to Henry Scheetz, who owned a weekly magazine called thePittsburgh Bulletin Index. Scheetz was genuinely impressed with Zachary's indefatigable drive and enthusiasm, character traits still very much in evidence today. Zachary was hired on the spot! Not as a printer's apprentice, but as an all-purpose news hound. His growing list of responsibilities included: copy boy, beat reporter, layout artist and photographer. Zachary covered everything from society balls and golf tournaments to hard news stories.

While Frank Zachary was busy reporting the news for theBulletin Index, the soon-to-be famous novelist John O'Hara became the magazine's editor. Nine months later, O'Hara left to pursue his career and Zachary replaced him as editor. To supplement both his experience and income, Frank Zachary also became the Pittsburgh correspondent forTime, LifeandFortuneMagazines. This didn't sit too well with his boss at theBulletin Index. They soon parted company.

In 1938, at the age of 24, Frank Zachary headed for New York City with $50 in his pocket. Through the aid of young Cyrus Sulzberger of theNew York Timesfamily, he was hired at Carl Byoir's public relations agency. Zachary found himself doing bland press releases for a variety of clients.

Feeling cramped and mired in a slump, he left the firm and went to work for Grover Whalen, the master publicist and showman. Client: The 1939 New York World's Fair. Zachary gained on-the-job experience unmatched anywherea far cry from those trite news releases he was accustomed to writing. As assistant director in charge of World's Fair magazine publicity, Frank Zachary fed countless feature stories and ideas to magazines on every "hook" imaginable. It was at the fair that he met and befriended a fellow PR writer responsible for radio publicity. His name wasBill Bernbach, the man who ten years later went on to open the legendary advertising agency Doyle Dane Bernbach.

After the World's Fair began to lose its luster and public attention shifted to crumbling world events outside the Fair's Utopian facade, Zachary moved on to organize a number of events for the United China Relief Fund. By 1942, the United States, already enmeshed in the global conflict, needed talented people to help bolster its patriotism. Frank Zachary was hired by the Office of War Information (OWI), where he helped create various propaganda publications to raise morale. He worked with a gifted group of people, from novelist Howard Fast and artist Ludwig Bemelmans to art directors Tobias Moss andBradbury Thompson. Their combined efforts produced USA and Victory Magazines. It was Frank Zachary's job as editor and picture coordinator that was to distill his creativity into even greater accomplishments.

After the war, Zachary, already supporting a wife and two daughters, needed to earn more moneyhopefully via editing a magazine. He became east coast editor for a monthly publication geared to tyro photography calledMinicam. Zachary lobbied to change the target audience and format of the magazine. He won.Minicambecame a wonderful vehicle for professional and artistic photography. He concentrated on stories detailing the stylistic and technical wizardry of Ansel Adams, Harry Callahan, Arnold Newman and others. It was then that Zachary purchased the name of "Modern Photography" for $200, soon replacingMinicamas the magazine's title.

While Zachary was preparing an article onHarpers Bazaars master art directorAlexey Brodovitch, he became totally amazed and immersed in Brod's style and the "art" in art direction. They became close friends and eventual colleagues.

In the late 1940s, Zachary decided to leaveModern Photographyand wound up working at a Curtis Publishing Company test publication simply called Magazine "X". It was to be a tabloid similar toLife, heavy on features packed with photography. Its title becamePeopleand Zachary was to become senior editor. Curtis executives, fearing it would lose money toLifeand compete against its ownSaturday Evening Post, abruptly cancelledPeople. Instead, Curtis Publishing concentrated its efforts on a faltering travel magazine calledHoliday, whose editor was Ted Patrick, Zachary's old OWI crony.

By 1948, Frank Zachary, disillusioned with the seemingly impossible task of putting together a successful magazine, took a job once again with Grover Whalen, this time to publicize the golden jubilee of New York's consolidation of five boroughs into one city. The 50th anniversary celebration was rivaled only by the 1939 World's Fair. Whalen, Zachary and crew pulled out all the stops on this project. Everything from the biggest parade in New York history to a monstrous fireworks display in midtown Manhattan helped make this celebration a tremendous success.

In 1949, Frank Zachary left Whalen for the last time. Zachary, along with friend and formerModern Photographycolleague George Rosenthal, Jr., decided to collaborate on a glossy,Graphis-type magazine showcasing the best in graphic design, illustration and photography. Rosenthal got his father to put up $25,000, and the large 9 by 12 inch publication was christenedPortfolio. No expense was spared to make it one of the most beautifully produced magazines of its day. From paper stock to specially tipped-in inserts,Portfoliowas a visual feast not to be missed! Stories and artwork featured painters, photographers and graphic designers who specialized in contemporary visual communications. Zachary and Rosenthal lured Alexey Brodovitch to become the magazine's art director. They paid him a whopping $3000 an issue.Paul Randalso got into the act, designing an "absolutely exquisite" letterhead.Portfoliowas indeed a labor of love.

Reality set in, however, when it came time to pay the bills. Zachary and Rosenthal decided to help defray costs by selling advertising space in the magazine. The ads turned out to be crude and detracted from the overall impact of the publication. So as not to destroy its cachet, advertising was dropped from its pages. This, and Rosenthal Sr.'s decision against further funding, led to the demise ofPortfolio. From 1949-1951, three glorious issues were produced. Prized as collectors items today,Portfolioremains one of the greatest achievements in modern day magazine content and design.

Always seeming to be at the right place at the right time, Frank Zachary was offered the position of picture editor ofHolidayMagazine. In 1951,Holidaywas in trouble and needed a fresh injection of creativity. Realizing the challenge involved in turningHolidayaround, Zachary accepted the job. To him, "The picture is the layout." If you have a great image, it need not be overshadowed by the type. With that in mind, Zachary began experimenting with layouts of photographs and illustrations la Brodovitch. Using almost cinematic principles of motion, scale and visual imagery, he transformed a stale and floundering format into a graceful one. Frank Zachary wasHolidays tonic!

According to Zachary, "You're only as good as the people you surround yourself with." He's quick to mention that the success ofHoliday, as well as the success of other endeavors, may not have been attained if the caliber of illustrators and photographers were not top-notch. Among those whom he is especially indebted to are: Slim Aarons, Henri Cartier-Bresson, Robert Capa, Jean-Michel Folon,George Giusti, Burt Glinn, Edward Gorey, Tom Hollyman, Arnold Newman, Robert Phillips, Ronald Searle and John Lewis Stage.

ForHoliday, Zachary developed what he termed environmental portraiture. Common by today's standards, it rocked editorial photography in the fifties. Case in point: an article on New York's master builder, Robert Moses. A studio shot simply could not capture the essence of the man. For dramatic effect, Zachary thought it would be a propos if Moses could be photographed against the backdrop of New York City. He commissioned Arnold Newman to shoot Moses standing tall on a girder, rigged precariously out over Welfare Island! Needless to say, it was environmental portraiture at its best.

After being passed over as editor ofHolidayin 1964, Frank Zachary left the magazine for: the world of advertising? Yes! At Mary Wells' request, he was made president of Pritchard-Wood, a McCann-Erickson subsidiary with nine branch offices throughout the world.

Based in New York, Zachary, sensing his lack of ability to succeed in advertising, stayed only eight months at Pritchard. He then moved to McCann's experimental Center for Advanced Practice, an in-house think tank dedicated to new and innovative marketing techniques. There, he worked closely with Bill Backer andHenry Wolf.

Zachary, a fish out of water, decided to return toHolidayas art director in 1969. It was too much too late.Holidayhad once again hit the skids after he left in 1964, and its popularity continued to decline. Attempts to revive it proved futile, andHolidaywas sold, with Zachary's assistance, to a businessman named Marty Ackerman. Ackerman also boughtStatusMagazine, and for Zachary's help in acquiringHolidayrewarded him with the position of editor. Zachary performed his magic once again, making Status a spirited publication.

When his Status contract expired, he left to joinTravel & Leisure. In 1972, after making his imprint there, Frank Zachary came full circle and was offered the plum job of editor-in-chief atTown & Country,a position he has held for 18 years.

Under Zachary,Town & Country's focal points have shifted to a very successful combination of high society with emphasis on trends in fashion and graceful living. He also spiced it up with a dash of highbrow satire. When Zachary took over as editor-in-chief in 1972,Town & Countryhad a circulation of 120,000 and $3 million in gross revenues. Today, it boasts a circulation of over 440,000 and gross revenues in excess of $32 million.

At the age of 76, Frank Zachary is the oldest editor-in-chief of any US publication. He remains as vibrant as the magazine he presides over. Zachary's concepts and designs have forever changed the way magazines are produced, read and enjoyed. Blessed with the innate ability and drive to adapt design considerations to societal changes, imbued also with a unique brand of graphic sense, Frank Zachary is truly the gin-in-the-punch of modern day magazine design.