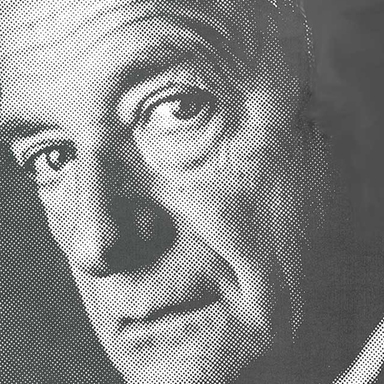 Ashley Montagu, in his bookThe Cultured Man, says, "As a rule it is not a good idea to meet the authors whose works one admires, unless one believes in the reality principle and desires to have one's illusions shattered.

The manseems reticent; his work, paralleling this, speaks softly. Note his fashion and cosmetic ads for Disney, Supima, Arden, Napier, and Dior. The photos, though daring in concept, do not grab you by the throat: they invite you in to take a closer look. The typography, though frequently innovative, would not frighten away even the most conservative client.

In this sense, his is the hooded whisper in a hushed theatre. You notice it and lean forward to hear more.

Of this characteristic, he says, "Projecting voice and image for a client is a large responsibility, and errors in commission are rampant. Why add to the garbage?

The manappears classical; similarly, his work is timeless. Give it an acid test: examine ads he has done for the same client, Elizabeth Arden, for more than three decades, in four different situations. If it were not for the model's styling, there would be little to date the ads.

In this sense, he is the perpetual innovator whose innovation is sensed, but never jars the senses.

Of this characteristic, he says, "Rules exist to be broken, but not broken arbitrarily. If you look hard and deeply into a rule, you will usually find a way of saying something differently.The manis quietly elegant, his deference reluctantly admixed with noblesse oblige; his work, matching this, exemplifies good taste. Observe his delightful marriage of type and photo in theMovadocampaign, done in 1975. HisNew Yorkerads, created in the early 1970's, are the epitome of good taste.

In this sense, his "design" is invisible. It is his visual positioning of the product that carries the day.

Of these ads, he says, "Taste is a matter of keeping a message as clear as it can be, of reducing the flourishes...TheNew Yorkerads themselves are the product.

The manis an artist, but his work, complementing this, reflects the businesslike savvy of an advertising art director. In the Harvey's Bristol Cream ad, the controlled curves of flowing liquid are contrasted with the unyieldingly straight lines of the headline. Yet the ad respects marketing imperatives.

In this sense, his ads are conceived to reach the prospect's mind, designed to appeal to the emotions.

Of this characteristic, he says, "Our charge should be finding the clearest voice for the bill payer. It's unfair to him to dish out the warmed over solution. And, to return to the question of art vs. craft, this must be answered personally, inwardly. Can we ever be artists? However, weareobliged to be craftsmen. And how many of us are guilty of the sin of fierce pride of craft? Is that so bad?"

The Baseball Hall of Fame, almost certainly the inspiration of ours, is for homerun hitters and others of that ilk. But Gene Federico is no long ball hitter. He is a clutch hitter who always manages to line the ball just where it needs to go to send home the winning run.

Please note: Content of biography is presented here as it was published in 1980.
Photo by: Jerry Friedman