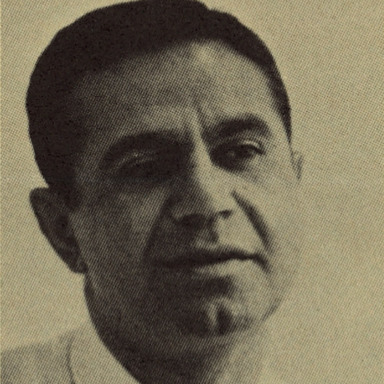 "To George, an idea was just a starting point," says Joel Harnett. "If you gave him an idea, he would come back to you a week later with ten, all of them better than your original, and all of them would be the exact expression of what you intended to say. In essence, he was an innovator, an original thinker." As vice president in charge of marketing atLookMagazine, Joel Harnett was a long-time associate and friend of Krikorian, and is in an enviable position to speak of his unusual qualities.

To others as well, George "Krik" Krikorian was the consummate promotion art director. In their view he actually devised the art of promotion as we know it today. And two positions he held contributed greatly to the enrichment of contemporary graphic art. The first was withThe New York Times, the second atLookMagazine.

Starting in 1939, his eye-catchingTimespromotional layouts changed forever the look of the newspaper's advertising. Soon other papers and other media followed the leader as they adapted and learned from Krikorian's eye-catching concepts.LookMagazine was blessed with two major talents. AsLook'spromotion creative director during the time whenAllen Hurlburtwas its editorial design director,Lookimmediately gained a reputation for innovation in every area. The magazine came into its finest days when it was simultaneously winning the lion's share of design awards and recognition from the business community. Later, after establishing his own company, Krikorian created memorable ads, promotional materials, book designs and graphics for such clients as The Franklin Mint, Viking Press, Tiffany and Company,The Daily Newsand others.

Krikorian was born in Bridgeport, Connecticut, in 1914. He spent his early school years there, and later graduated from Pratt Institute in June 1935. His first jobs were in advertising, initially at the William H. Rankin Agency, then with Fletcher and Ellis Advertising. His next move took him back to Connecticut, where he was an art director with the American Chain Company. But the ambitious young Krikorian had his heart set on working in New York. A mutual friend sent him to see Irvin Taubkin who was then the promotion manager of theTimes. "We looked at some of the designs and sketches he had done, says Taubkin today. "Refreshing is perhaps the best word to describe the work. We knew we had to hire him. George became the first true layout designer we had ever had in the department."

TheTimesthen was but one of seven major dailies serving the New York metropolitan area. It was the leading advertising medium in the country's largest market, but its promotion was hardly commensurate with the paper's image as the leader "printing all the news that's fit to print." Bold and innovative measures were called for. With the appearance of Krikorian, theTimesseemed to take on a new life. His promotional ads attracted more local and national advertisers and convinced ad agency people that it was read not only by men but delivered to women as well.

Working with writer Taubkin, George discarded the frills that distract in most advertising. "He eliminated from his designs everything that does not contribute to the quick telling of the story," wrote P.K. Thomajan in a booklet describing Krikorian's work at the time. "His most successful advertisements have almost a stark feeling about them. But that very starkness compels the reader's attention."

As his work received more media and public attention, it also caught the fancy of the art world, too. HisTimescommuter posters were exhibited in a one-man show at the Museum of Modern Art and his posters were acquired for the permanent collection of the design department. During this period Krikorian became promotion art director of the expanding Times department.

He took a leave of absence from the newspaper during World War II and served overseas with the Office of War Information, setting up publication art departments in Africa, Italy and Greece. He served as Chief of the Art Section, Mediterranean Command, with an O.W.I. rank of Major. One job of which he was especially proud was his design of the library in Athens for the United States Information Agency (now the International Communications Agency).

WhenLookfolded, he formed George Krikorian Associates, a full-service copy, design, planning and consulting company in advertising and promotion for print media. His firm handled a range of assignments, including fashion supplements for theTimesand promotions for theDaily News. He also was the designer of "21, The Life and Times of New York's Favorite Club," a book by Marilyn Kaytor.

George was a man of many interests, who loved art, dance, music and the theater, but he was single-minded when it came to his work. Again from Joel Harnett: "I never knew anyone who had such little tolerance for a client or member of management who had no taste, was thoughtless, or had no talent. It is not that he was disrespectful in the face of authority but he believed implicitly in what he did. George Krikorian would never permit you to run an ad if it didn't have a point, if you didn't have something to say. And 'breastbeating' was prohibited. George was more than an extraordinary designer; he understood words and developed many campaigns himself. His was a pure instinct for promotion through design."

Although he was often credited for giving promotion a modern layout with his use of type and design, George himself put things in perspective when he described what design meant to him when he wrote in "Designing with Type" (1951):

He died in 1977 at the age of 63, neither a modernist nor a traditionalist, but very much his own man.