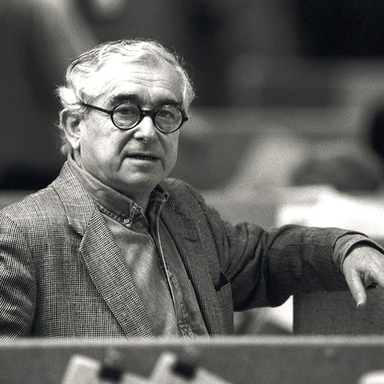 Descriptions of George Tscherny's work always seem to focus on the simplicity and aptness of his designs. No matter what the prevailing style, Tscherny's work is timeless. "Over the past four decades, American graphic design has displayed a dazzling vitality," said designer, professor, and authorPhilip B. Meggsat a ceremony honoring Tscherny with the American Institute of Graphic Arts medal in 1988. "Through all this upheaval and change, George Tscherny has been steadfast in his own vision. He is a true believer in design as a problem-solving activity, where solutions emerge from the problem. George has not wavered in his quest for an intelligent and articulate solution to each and every problem."

Born in Budapest on July 12, 1924, and raised in Berlin, Tscherny emigrated to the United States in 1941. After serving in the army, he attended the Newark School of Fine and Industrial Art on the GI Bill, where he studied graphic design. He went on to attend Pratt Institute in Brooklyn, which he felt was the best college for artists at that time. "At first my concern was with craft and technique. I saw art school purely as a trade and vocational school, where I pursued drawing, rendering, and other skills with intensity and without concern for developing original ideas. When I eventually became interested in expressing myself creatively, I did not have to struggle with execution. My figure drawing became more expressionistic and gesture became more important than detail. I had intuitively heeded a Japanese sage who advised to first acquire an infallible technique before opening oneself up to inspiration."

As for what inspires him, he cites various influences, including music, photography, dance, art history, and painting. "Today, the most pervasive influence on my work is the everyday culture around me," he adds. "I get great pleasure from finding the unexpected in the mundane and pointing out the contradictions in daily life."

After college, Tscherny went to work as a packaging designer at Donald Deskey & Associates in 1950, and three years later joined George Nelson & Associates. "My association with George Nelson, who was a visionary architect, designer, and thinker, yielded the most important lesson of all, which was to bring no preconceived ideas to a new project, to start each time from scratch. Maybe it was not always the most economical way to run a design office, but it provided the best climate for doing creative work."

In 1955 Tscherny opened his own office and shortly thereafter was appointed design consultant to The Ford Foundation, with responsibility for all publications. Tscherny's assignments have ranged from the design of a commemorative postage stamp for the U.S. Postal Service to vast identification programs for corporations such as W. R. Grace & Co. and Texasgulf Inc.

Tscherny also forged a strong relationship with the School of Visual Arts over the years. He designed SVAs very first poster in 1956 and taught its first design course. And after four decades, he was the school's choice to design a new signature and complete identity program. Of the new logo, he says, "The solution was to contrast the icy perfection of the signature's computer-generated Bodoni typeface with the spontaneity of the painterly mark. It reflects what SVA has become: an art school with a broad range of offerings, from technology-based programs to painterly pursuits...I think the logo avoids the 'hard edge' sameness of the usual corporate trademark."

Artist and graphic designerPaul Davis, who studied with Tscherny as an undergraduate at SVA in the late '50s, says, "He presented ideas in the classroom, as in his work, with great clarity and understatement. He is always to the point, and with wit and humor." The new SVA symbol, Davis adds, "is characteristic of his workunexpected, playful and spirited. His sense of color is very personal and powerful, and he uses his wonderful ability to draw in a sure-handed, minimalist way. It makes me happy every time I see it."

"I see myself as a bridge between commerce and art," says Tscherny. "My work attempts to cross over to the art side as often as is appropriate and possible." But he makes no apologies about being a commercial designer. "It was apparent fairly early in my life that I had a strong visual sense as well as an aptitude for drawing, and it didn't take long before I knew what to do with that ability. In the Berlin neighborhood where I grew up, there was a movie theater that displayed huge hand-painted portraits of the actors featured in the current film. These portraits triggered my desire to become a 'commercial artist,' a job description with which I am still quite comfortable, despite its current lack of popularity. For just as copy can be literature, design can be art when it reaches certain levels of originality and distinction."

Tscherny's work and ideas are now pervasive throughout the field of graphic design. In addition to SVA, Tscherny has taught at Pratt, lectured as Mellon Visiting Professor at Cooper Union, written and been the subject of numerous magazine articles, and his work has been covered in many books. Tscherny's designs hang in the permanent collections of The Museum of Modern Art and The Cooper Hewitt Museum, both in New York, and The Kunstgewerbemuseum, Zurich. The coveted AIGA medal was presented to him "In recognition of distinguished achievements and contributions to the graphic arts." Tscherny has also served two terms as president of the AIGA and is a member of Alliance Graphique Internationale. In 1992 he mounted a one-man retrospective of his work for the Visual Arts Museum's invitational "Masters Series."