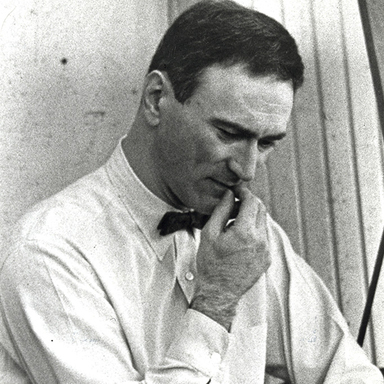 Imagine a crisp September day in Brooklyn during the 1950s. For many second-year design students at Pratt Institute, it's the beginning of a new semester. Time to start looking beyond their present studies, focusing on more serious endeavors, like employment in the fields they aspire to work in. The bell rings, signaling a class change. All skeptically file in to what a school course catalog coldly refers to as "Advertising Design," taught by a certain Mr. Herschel Levit. For many, their lives will never be the same again.

What was it about this man, whose Svengali-like power of captivating and motivating his students prompted ADC Hall of Famer George Lois to say that outside of his father, Herschel Levit influenced him most?

Born in 1912, Herschel Levit wasted no time in knowing what he wanted to do with his life. Before graduating from the Pennsylvania Academy of Fine Arts, Levit became a Cresson European Fellow and later studied at the Barnes Foundation. In 1947,Alexey Brodovitch, the sagacious modern master of design and future ADC Hall of Famer, invited Levit to study at his legendary Design Laboratory. It was soon thereafter that he began his teaching career at Pratt Institute with the firm opinion that "the freedom to express oneself through experimentation is the rightful heritage of our artists, for without experimentation there can be no art; there can be no future."

Herschel Levit was more than merely an instructor. He was an artist, a designer, a photographer, a writer and a prophet. A true Renaissance man in 20th century clothing, he believed in a working knowledge of all aesthetic and classical disciplines in order to be a successful designer. "You can't influence people if you live in a vacuum," Levit once remarked. His prolific professional design career closely paralleled his teaching career. The constant high level of professionalism he demanded of himself was also expected of his students. He was by no means an "easy" teacher. Levit figuratively threw the books at them! He insisted upon total commitment and most students, hanging on his every word, gave it to him.

To Levit, art was everywhere, from music to books to advertising. Witness his very productive output of designs and illustrations for album covers, children's books and print ads. Levit's hallmark was his versatility. Whatever the client or assignment, he could easily adapt his style to suit the job.

Throughout the years, Herschel Levit has received multiple recognition for his work inGraphisand various Art Directors ClubAnnuals. His drawings and paintings have been widely exhibited and many permanently reside in the collections of New York's Metropolitan Museum of Art, Museum of Modern Art, Museum of Fine Arts, Boston and The Israel Museum.

As a crowning achievement to his three distinguished decades of teaching at Pratt, the School of Art & Design unanimously named him Professor Emeritus in 1977. A year later, Herschel Levit began teaching advanced photographic techniques at Parsons School of Design, a position he enjoyed up until his death in 1986 at the age of 74.

Of all the honors, awards and praise bestowed upon Herschel Levit, the ones that meant the most to him came from his loving students.

Gennaro Andreozzi:"One day in his classroom, the light just clicked on inside of me and I knew what true graphic design was all about. Herschel was simply the most influential person in my career. "

Marshall Arisman:"Herschel Levit was one of those rare, passionate teachers who taught more than just 'Advertising Design. ' His spirit was contagious and we all did our best work as a result of it. Herschel taught us how to embrace the wonders of life by broadening our horizons in addition to our portfolios."

Steve Frankfurt:"We are all figments of Herschel's imagination."

Steve Horn:"Herschel Levit discovered I was color blind and assured me it was okay, that I could still be a success. Now I leave the rest up to Kodak! Herschel was the master of us all. In one word: Incredible!"

George Lois:"He's my greatest hero ... I owe him everything. He gave me the backbone to do what I've done for the past 35 years. To this day, I am still in awe of him. It took me 20 years before I had enough guts to call him 'Herschel'!"

Stan Richards:"There is one overriding influence in my life however, which 35 years later still looms supreme: Herschel Levit. As a teacher and an inspiration he was without parallel. "

Len Sirowitz:"Herschel Levit not only changed my life, he enriched it. He taught me to see. To focus. To understand. Herschel taught me how all of the arts interrelate. How music and painting and dance and drama and sculpture and literature all tap the same inner emotions. Herschel taught me how to apply those emotions to my craft. I will always have the fondest memories and deepest respect for 'Mr. Levit,' the finest educator I have ever known."

Ron Travisano:"If you are lucky and if you keep your eyes and ears open, you may run into one or two human beings in your life that will make such a contribution to you that your vision, abilities and senses will be totally altered. New horizons, new distinctions and new possibilities will present themselves in a way that will actually change the fabric of your life forever. For me, Herschel Levit was one of those people. I view art, design, music and life in general the way I do because of him. Now, I hear what I couldn't hear, do what I couldn't do and see what I couldn't see. Thank you Herschel."

George Tscherny:"When I first encountered Herschel Levit in my second year at Pratt Institute, it felt as if I had come onto dry land after wading through a swamp for a year. The link was finally made between abstract school exercises and the commercial world of design. A few years later, when I started to teach design, I patterned my classes after Herschel's."

Please note: Content of biography is presented here as it was published in 1989.