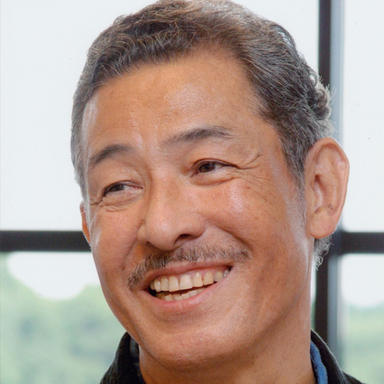 Issey Miyake was born in Hiroshima in 1938. He graduated from the Tama University, Tokyo in 1963 with a degree in graphic design. In 1965, he left for Paris to study at the Ecole de la Chambre Syndicale de la Couture Parisienne. From 1966-1969 he worked for different fashion houses in Paris and New York.

The most significant effect of this period upon Miyakes work was a schism with traditional couture. Miyakes vision to create clothing for everyone and his subsequent exploration of the relationship between clothing and the body set him apart. His touchstone eventually became creating clothing from a single piece of cloth.

Miyake returned to Tokyo and established the Miyake Design Studio in 1970. It has evolved into a research laboratory dedicated to attracting and nurturing diverse talent, a studio with a team mentality.

In 1973, Miyake presented his first fashion show in Paris, defying tradition and trend, surprising those assembled with his avant-garde and architectural vision. In 1978, he publishedEast Meets West, a seminal book in which he chronicled his experiments making clothing from one piece of cloth that transcended the boundaries of East/West traditions and innovations. In 1979, Miyake was invited to the International Design Conference in Aspen, CO. to present Issey Miyake: East Meets West as the Conference finale.

Miyakes quest for clothing that could be universal was realized when Frankfurt Ballet director William Forsythe came to him to request for costumes for his dancers. Miyakes garment pleating is a revolutionary new process by which, instead of pleating fabric first, an outsize piece of fabric is cut and sewn and then sandwiched between layers of paper, then fed through a heat press. When the paper is cut away, a perfectly sized finished pleated garment is ready to wear. In 1992, the Pleats Please Issey Miyake line was born.

In 1997, Miyake presented the result of a new experiment using digital technology at his show in Paris. Just Before, a continuous roll of knit tubes from which the wearer could cut around lines of demarcation to extrude a fully-finished dress and then customize it, was the earliest evolution of what was to become A-POC (A Piece of Cloth). In 1999, Miyake turned the Issey Miyake line over to an associate so that he could return to his first love, research. Developed with Fujiwara Dai, A-POC is a technological process by which fabric, texture, and the components for a fully finished garment are made in a single process and which has unlimited possibility and applications to other areas of design.

A-POC has been featured prominently inIssey Miyake Making Things, an exhibition in Paris, New York, and Tokyo in 1998, A-POC Making at the Vitra Museum in 2001; and Nannano? A-POC at the Axis Gallery Tokyo in 2003.

The Miyake Issey Foundation was established in 2004 and in 2007, Miyake-brainchild, 21_21 Design Sight will open in Tokyo as a space in which to explore how all medium of design affects our daily lives.