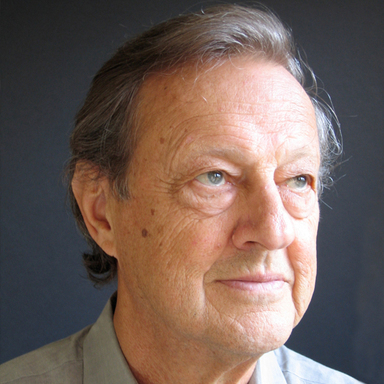 When Ivan Chermayeff arrived at Harvard in the early 1950's he presented the Dean of Undergraduate Studies with an unusual request. Rather than majoring in any particular subject, Chermayeff wanted to major in professors. A man of obvious perception, the Dean gave his approval. As a result, Chermayeff's program of study was a crazy-quilt of courses, semantics and anthropology and history and what-have-you, but each course was taught by an interesting, exciting or provocative professor. Here is an early clue to what Chermayeff himself calls his "pack rat" personality, what writer and editor Russell Lynes more charitably calls his "magpie" approach to life. His partnerTom Geismarsees him from quite another angle: "Ivan combines the sensitivities of the artist with the decisiveness of the corporation executive. This unusual combination is fueled by an extraordinary energy level."

Does a pack rat have the soul of a business executive? Does the magpie embody the spirit of an artist? Let us see.

Ivan came to America from England with his family in flight from World War II. His architect father arrived first in Montreal, and then moved on to San Francisco, Pennsyl-vania, New York, Illinois and New Haven before finally settling in Massachusetts. After two years in Cambridge savoring various professorships, the younger Chermayeff returned to Illinois, this time to the Chicago Institute of Design where he studied visual fundamentals. Again, after two years he was off to Yale where he studied withHerbert Matter, Alvin Eisenman andBrad Thompson, among others, before earning his Bachelor of Fine Arts Degree, a parchment he finds too ugly to hang on his office wall.

Now, contrary to the belief of many, Chermayeff & Geismar Associates did not, like Venus, appear fully formed over night. For Ivan there was first an apprenticeship with the architectural firm of Edward Larabee Barnes, a period of freelancing and then a tour of duty with Columbia Records where he designed record jackets, three or four a day, each one, he reports today, more terrible than the last.

Breaking away, in 1957 Brownjohn, Chermayeff & Geismar was formed. Their first clients were "butchers, bakers, candlestick makers and window washers, and friends who were photographers." Gradually, these were upgraded to includeCraft Horizons Magazine, the Randall's Island Jazz Festival and other clients. With the departure ofRobert Brownjohnfor England, the firm became Chermayeff & Geismar Associates in 1960.

Writing inDesign Quarterlynearly two decades later Robert Jensen says of the group: Chermayeff & Geismar has become the profession's standard, has in effect defined the profession." Just what is the profession? In Chermayeffs mind: "The central idea of graphic design is finding relationshipsrediscovery as a form of discovery."

Some observers see his avenues of discovery leading back to antecedents such as Rand, Klee, Schwitters and Matisse. Corporate beneficiaries of his rediscoveries are many and prestigious. Among the clients for whom the firm has developed comprehensive corporate identity programs are Mobil, Burlington, Xerox, Dictaphone, Pan Am, The Chase Manhattan Bank, Indian Head, Owens-Illinois, Perkin-Elmer, the Museum of Modern Art, New York University, the Port Authority of New York and New Jersey and the U.S. Environmental Protection Agency. Chermayeff & Geismar also designed the official American Revolution Bicentennial symbol and the related identity program.

With such notable accomplishments on the record, what are Ivan Chermayeff's personal views of the world of designing?

Despite his belief that "designers don't usually write well," Chermayeff has written: "Design is not art. Design is not terribly significant. Design is not always better than nothing. Design is the solution to problemsreal, important or unimportant problems. The problems of design are not designer problems; they are client problems. Design must therefore grow out of a reasonable understanding of those problems, and their goals and aspirations."

In the area of exhibit design, Chermayeff & Geismar has fulfilled the goals and aspirations of clients with such designs as the United States Pavilion at Expo '70 in Osaka, Japan, "The Mill" for Burlington Industries at their headquarters building in New York City, and "The Hall of the Sun" at the Hayden Planetarium. In 1964, they designed a traveling exhibition of John F. Kennedy memorabilia, which toured the United States and Europe to raise funds for the Kennedy library. In 1973, they completed a special exhibition of American Productivity for the Smithsonian Institution and in 1976 designed the major Bicentennial exhibition at the Smithsonian's National Museum of History and Technology, "A Nation of Nations.

On this area of discovery Chermayeff writes: "Exhibits are an endless series of questions, all of which cannot be asked or answered. It is important to ask as many as possible. Fortunately, most museum exhibitions are about work that speaks for itself. The idea is in the selection of the subject. The main problem is to let the work breathe. No tricks. No gimmicks. Let the stuff be seen in its best light (lighting). Show no more and say no more than is truly necessary (little text, little captions). A great design is one of which it could be said that there was no designer."

Clearly one office is not large enough for such fertile talent. Hence, Ivan Chermayeff and Tom Geismar are also partners in the architectural design firm of Cambridge Seven Associates. In this capacity they were responsible for the design of the exhibits for the United States Pavilion at Expo '67 in Montreal and all graphics for the Massachusetts Bay Transportation Authority. Chermayeff is also the author of "Observations on American Architecture," published by the Viking Press in 1972. More recently he designed and illustrated "Sun Moon Star," a book that he conceived and took to Kurt Vonnegut to write (Harper & Row). He has also illustrated many children's books, which, as we shall see, is hardly surprising.

After visiting Chermayeff's house and studio in Litchfield, Connecticut, Russell Lynes reported: "He is also a collector, not in any methodical sense, of children's toys and a maker of toys out of found objects that seem astonished by what they have become. There are shelves of toys, a casual library of toys, bookcases filled with toys, toys on mantle pieces on desks, on bureaus, on windowsillstrolley cars, fire engines, dump trucks, buses, wagons with horses. There are birds that do not sing and tops that do. It is not, as I said it was, a collection of toys and Ivan doesn't consider it as such. It is a lexicon of images, of playful incongruities, of unlikely bedfellows."

Lynes goes on to report that Chermayeff's office is the New York branch of the Litchfield studio and is apparently equally disorganized, but presumably the designer knows where every piece of paper is if he wants it. At his desk Ivan is surrounded on every available surface withthingswooden birds and beasts, toys, posters, even a gingerbread man. The walls are bedecked and decorated with paintings, maps, sketches and photographs. His apartment is a somewhat tidier version of his studio and his office.

Obviously such working and living spaces are trying to tell the viewer something about the basic character of the man. On the conscious level, Chermayeff does not draw a line between any of his creative activities. He sees himself moving from design to painting to anything else quite readily. His lithographic prints are sold by Pace Galleries. He has also designed many tapestries and murals to be produced by others. There is no limit to his interests and he bemoans the fact that "there are thousands of things I haven't done." Sometimes, a client is not as quick to grasp an idea as Ivan, and as a result he feels that it takes an enormous amount of time and energy to get things produced, but he is willing, indeed almost driven, to give the time and energy to see the job through. Thanks to this drive he estimates that about ninety percent of what he does gets printed.

Which brings us back to Tom Geismar's observation on what makes Ivan tick: "the sensitivity of the artist, the decisiveness of the corporation executive, combined with an extraordinary energy level."

Selectivity: the theme of the pack rat or the magpie again. But there is another analogy. In the diamond fields of Africa giant machines dig up hundreds of thousands of tons of sand and gravel. These rocks and alluvial deposits are crushed and milled to nuggets. By shaking and shifting and rotating, the diamonds and other heavy stones drop to the bottom of the containers, which then spill them on adhesive-covered conveyor belts where they are sprayed with water and acids. Ordinary stones are dispersed by the liquid jets, but the diamonds reject the water and acids and remain affixed to adhesive belt.

Now it becomes apparent what the pack rat/magpie has been up to this whole time, what with the collecting of toys and bicycle parts and tattered gloves, of flags and jugs and airline baggage stubs. Chermayeff has been doing his own kind of diamond mining, gathering tons of alluvial dross, then compacting and sifting and separating and finally doing the selecting in his head. And eventually he comes up with the designer's idea, the diamonds of the mind.