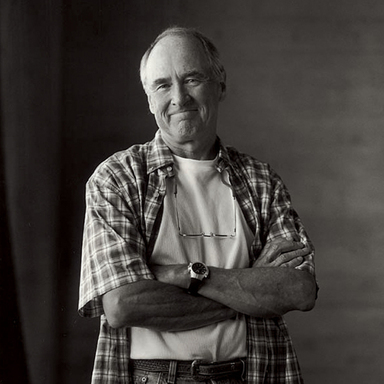 Wheres Jerry? Riney said it a lot. Almost as often as I dont see an idea here.

Of course, it was never about finding Jerry. Jerry was not elusive. The mad inventor simply wanted to see his machine-builder. The one whod engineer a notion to life. Theyd have a brief conversation followed by Jerry walking back to his office with some doodled scrap of yellow legal paper. Hed sit alone at his desk, stare at the thought it contained and re-jigger it or rebuild it into something more than it was, something that was a doable and delightful piece of communication. Later, when the madman looked at it, hed accept it as proof that, as he had anticipated, the idea worked.

Its nice to have your very own Jerry. Hes a product of Northern California. But his fiber, his work ethic, is strictly Utah Mormon. Perhaps its also the source of the humanist streak that permeates his approach to design, to advertising, and to those who work around him. He attended Art Center in L.A., graduated and went to Campbell Ewald in Detroit to work on Firestone, Corvette, and other muscular brands. After a few years, he came back to California to work at BBDO, San Francisco. Thats where he met Hal. When Hal jumped to Botsford Ketchum, he invited Jerry to join him. They worked on Olympia Beer, Yamaha Motorcycles and Crocker Bank. In 1974, Hal found a garage to house his own shop and asked Jerry to be his partner. Over the next few decades, Jerry created groundbreaking work for Blitz-Weinhard, Alamo, Gallo, Strohs, Pabst, Budweiser, Saturn, Dreyers, Henry Weinhards, First Union, Perrier and Bartles & Jaymes. Perrier was named one of the best campaigns of its decade. Bartles & Jaymes, one of the top one hundred campaigns of the century. Hidden somewhere known only to Jerry is a redundant collection of lions, pencils, statues and heads sitting in bowls. His credentials secure, the only real question is: Is he the nicest man in advertising? Maybe. But hes not, as they say, soft. Jerry has rules.

Make it beautiful. Andelin is seemingly incapable of producing work that isnt. Whatever is in front of him, a hangtag, label design, print ad, actors in a scene, he pulls his head back, squints for a while, and recomposes it into something elegant and graceful. His best work is inviting rather than confrontational. Some ads challenge perceptions; Jerrys ads create them, which is far more subversive.

Take your time. Jerry likes to use his computer for e-mail and eBay, and perform his work by hand. His office is filled with books, many rare and out of print, and its from these he draws inspiration. Were you to find yourself whizzing down the information highway, that was Jerry you saw, happily parked on the shoulder, sketching a layout.

Mind the details. Maybe Jerry didnt see God in them, but God saw Jerry. In the days of long copy, few art directors were more adept at performing what the insensitive copywriter might call decorating the words. Jerrys body of long copy ads is impressive; each patiently worried and worked until some mystical tumblers clicked in his mind. Clients who trust Jerrys instincts are rewarded with art direction that elevates their brands.

He is, and will always be, a degenerate metaphorist. Trouble: Its like opening the worms. Victory: Thats a little coup in his cap. Breakthrough: Theres light at the beginning of the tunnel. One particular favorite, which only at first appears to be nonsense, succinctly describes a path familiar to all creative teams: Maybe itll take us to a place where we can just throw it away.

When Jerry decided to move on from the agency, about twenty creative guys whod worked with him over the years drank dinner in his honor. Jerry liked it until everyone took turns saying a few nice words. About halfway through Hals remarks, Jerry stood up and took a walk.

Right where he belongs.

-From an essay by Paul Mimiaga