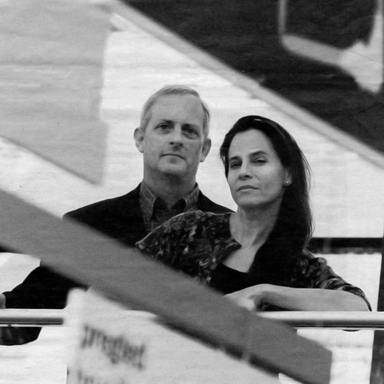 Jessica Helfand and William Drenttel are partners at Winterhouse, a designstudio in northwest Connecticut. Their work focuses on print and online publishing, educational and cultural institutions, and design programs of social impact.

They are the 2009-10 recipients of Rockefeller Foundation funding to develop a global initiative around design and social innovation; the winners of a 2010 Sappi Ideas That Matter grant; and were appointed in 2010 as the first Henry Wolf Residents in Graphic Design at the American Academy in Rome.

They are co-founding editors of Design Observer, the leading international website for design, visual and cultural journalism online.

In 2006, they founded the Winterhouse Institute. Among its initiatives, the Institute created the AIGA Winterhouse Awards for Design Writing and Criticism (a yearly $10,000 prize for design writing). More recently, it created the Polling Place Photo Project, a national initiative to document citizen experiences at polling places, conducted during the 2006-08 election cycles.

Jessica Helfand has been senior critic in the graduate program in graphic design at Yale School of Art since 1996. She also teaches the Yale College freshman art seminar Art 001: Studies in Visual Biography inspired by her book, Scrapbooks: An American History, published by Yale University Press.

She is the author of three other books on design and cultural criticism: Reinventing the Wheel (2002), Screen: Essays on Graphic Design, New Media and Visual Culture (2001), and Paul Rand: American Modernist (1998). She has written for many publications including Aperture, Communications Arts, Eye Magazine, Los Angeles Times Book Review, Print, and The New Republic.

In 2006, Helfand was appointed by the Postmaster General to the U.S. Citizens Stamp Advisory Committee, where she chairs the design subcommittee. She is a life fellow of the American Antiquarian Society.

Prior to founding Winterhouse, Helfand was an award-winning editorial and interaction designer, working with leading publications and newspapers. She is a graduate of Yale University, where she received a B.A. in Architectural Theory, and a M.F.A. in Graphic Design.

William Drenttel is the editorial director of Design Observer, and directs Winterhouse Institute and its recent work at the intersection of design and social innovation.

He is the design director of Teach For All, an international initiative working towards educational equality globally. Previously, he served as the creative director of two large literary foundations, Poetry Foundation and Nextbook. He has also published and designed over twenty books under the Winterhouse imprint, many of them co-published with leading academic publishers.

He is president emeritus of the American Institute of Graphic Arts, a senior faculty fellow at Yale School of Management, and a fellow of the New York Institute of the Humanities at New York University. He has served on the boards of the Cooper-Hewitt National Design Museum, Lingua Franca, Mayo Clinic Center for Innovation, Poetry Society, and Susan Sontag Foundation.

Prior to founding Winterhouse, Drenttel was president of Drenttel Doyle Partners and a senior vice president of Saatchi & Saatchi. He is a graduate of Princeton University, where he received a B.A. in Film and European Cultural Studies.