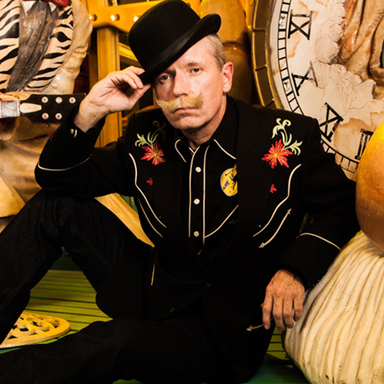 Kevin OCallaghan is a design educator with a unique focus on transformative conceptualization. OCallaghan has been teaching 3-D design courses at the School of Visual Arts since 1985. In 1999, he founded the undergraduate 3-D design program, which he currently chairs. In collaboration, he and his students transform wasteful, dangerous, obsolete and iconic objects, products and other things into conceptual products and works of art. He has become well-known for his dynamic touring exhibitions, notably Yugo Next, where each of 30 students were given one of the infamously bad Yugo automobiles and told to repurpose it into another functional object. It didnt work as a car, so he challenged his students to give it a new use. From car into gigantic telephone, grand piano, and even a church confessional booth, his students were required to develop a narrative from which the end product results. The exhibit filled Vanderbilt Hall in New York Citys Grand Central Terminal, and went on to travel the world for over 2.5 years. This was just one of over 70 thematic exhibits that went on to be seen in many of the worlds greatest venues. The exhibitions have been featured in over 190 newscasts and 400 articles reaching over 500 markets around the world, including CNN seven times. All of this exposure has given tremendous attention to all students involved.

While many of his projects and commissions bring forth the whimsical, OCallaghan also engages in social and political commentary. For the past 30 years, sustainability has been a key component of many of OCallaghans creations. In 2008, NBCs Green is Universal commissioned OCallaghan to create a piece of art to be on display in Rockefeller Plaza in celebration of Earth Week. The art was shown on The Today Show every day that week, and viewed by over 40 million people across the country. The result was a 16 x 24 foot gold ornate frame constructed from all Green materials. Then, collaborating with his students, he created a piece of art made up of 5,000 cell phones (e-waste). Every day, a new panel was hung as The Today Show followed the progress of the cell phone art. At the end of the week the artwork was completed. The 2009 Off-Roading project took a fuel-indulgent truck off the highway and gave it new life by converting its parts into household furnishings, including working lamps, chairs, tables, a couch and a chaise longue. OCallaghan mounted the Disarm exhibition in 2006, which repurposed M16 assault rifles into icons of a nonviolent society: the sanctity of a white picket fence, the sounds of a violin and the security of a teddy bear.

As an educator, OCallaghan possesses a rare combination of indomitable fortitude and immeasurable tenderness. He is a demanding teacher who gives his students all that he can, and expects them to work at least as hard as he does in helping them to achieve their visions. He instills in his students both the strength and confidence that they can accomplish anything with creativity and hard work. The wisdom of everything in moderation eludes OCallaghan; his is a realm based upon the paradoxical, encompassing Foucaults thinking the unthinkable and Voltaires reasoning that the superfluous is a very necessary thing. Hes been known to have a quick fuse under pressure and to react with verve, often accompanied by audible projection and a face as red as his hair.

As a 3-D designer, OCallaghan also creates monumental imaginative spectaculars for clients including MTV, History Channel, NBC and other media giants. OCallaghan is the designer of the iconic Popcorn Trophy for the MTV Movie Awards. OCallaghan has become known as the guy who can make huge objects and deliver them overnight. His ability to produce at warp speed is unparalleled.

But he takes the most pride in the work he does as a designer/educator. His long-term relationship with the School of Visual Arts has produced many outcomes. His ART ISHEALING poster, a tribute to the heroes of 9/11 has been included in the Library of Congress. He was the recipient of the ADC Gold Cube Award, Distinguished ArtistTeacher Award and a multiple-time recipient of the Platinum Teacher, Graphis New Talent Annual award. In 2010, Harry N. Abrams published Monumental, a profusely illustrated chronicle of his many accomplishments.

Part cultural anthropologist and part creative whiz kid, OCallaghan possesses a mature artistic vision that coexists with that cusp of life where the tooth fairy is alive and well, seductively inviting the fanciful to flourish. Yet for all the razzmatazz and grandeur that contributes to his creative ingenuity, when he shares an exploit, he becomes fully submerged in the moment, as though reliving the experiencethe smells, colors, sights and sounds. Ultimately, OCallaghans symphonies are composed of textured dialogues through which disparate elements are repurposed and interwoven: a moon man makes orange juice and an old Olivetti typewriter becomes a birdcage.


Please note: Content of biography is presented here as it was published in 2012.
Photo by: Payam