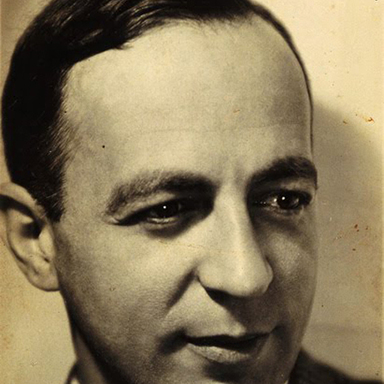 In 1939, when Ladislav Sutnar arrived in New York to execute his design for the Czechoslovak pavilion at the World's Fair, he was already known throughout Europe for his pioneering typography, for the force of his graphics and the compelling simplicity of his exhibition design.

Since 1927, he had been in charge of all publication design for one of Prague's largest publishing houses, director of the State School of Graphic Arts since 1932, and, in twelve years, had designed sixteen major foreign expositions in ten countries, winning the Gold Medal for his work at the 1929 Barcelona Exhibition.

Sutnar was born in Pilzen, Czechoslovakia in 1897. He studied at the Academy of Applied Arts in Prague, and began his career as a painter. But his interest in fundamental design concepts soon led him to a broader scope of activity. His work was strongly influenced by the Bauhaus, whose graphic design movement he claimed to have started.

He was art director of a book publishing firm and editor of a magazine of architectural and design trends, among other pursuits, but it was his exhibition design that brought him to America. He was sent to New York to execute his design for the Czech pavilion at the 1939 World's Fair.

While he was in America, the Germans invaded his homeland, and Sutnar, because of his prewar anti-Nazi activities, became persona non grata in Czechoslovakia. He stayed in New York and built a new career as art director for Sweet's Catalogues Services (1941-1960), and formed his own company in 1951. Meanwhile, he did typographic design for McGraw-Hill, advertising and corporate image for Printex Corporation (Scarves by Vera), and acted as art director forTheatre Artsmagazine. He was also one of the world's foremost new products designers, creating trend-setting designs in glassware, porcelain, flatware and other products.

Sutnar's works are simple in concept and execution, generally with few components. But they are never placid, usually giving the feeling of motion. Their vivid colors and strong directional patterns command the viewer's attention.

Sutnar was a professor in his native country and quite willing to share his philosophies and techniques. In America, he did so in three books:Design for Point of Sale(1952),Package Design(1953), andVisual Design in Action(1961), each one a textbook in its subject.

Ladislav Sutnar remained a vital force in graphic design until his death in 1976.

Please note: Content of biography is presented here as it was published in 1979.
Photo by: Josef Sudek