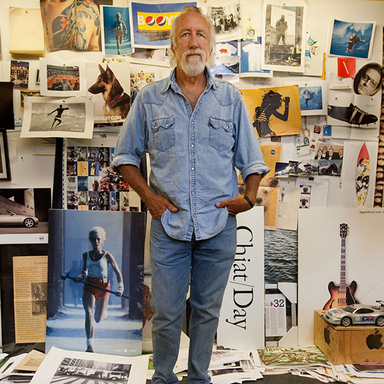 This is the city, Los Angeles, California. It's a magical place known for burritos, celebrities, Disneyland, Dodgers, earthquakes, EST, freeways, palm trees, smog, tofu, valley girls andadvertising? There are ten million stories of people who work and play here. Lee Clow is one of them and this is his story...

Born in Los Angeles in 1943, Lee Clow literally grew up at the beach. He credits his first grade teacher, Mrs. Rice, with recognizing his artistic potential. It all occurred very serendipitously with a little drawing of a boat Clow had made in class. It seems little Lee loved boats and realistically portrayed it right down to the curling eddies of smoke rising from its stack. Mrs. Rice immediately noticed his uncanny knack for detail and told Lee's mom of his impending future as an artist. As a result, Mrs. Clow encouraged her son to continue drawing and painting.

As Clow got older, he began to hone his artistic skills. He attended Santa Monica City College and received a two-year degree. His parents simply could not afford to send him to the more prestigious Art Center College of Design. Years later, as irony would have it, Clow was asked to teach there! It was also during this period that Clow's distinct California personality crystallized.

According to Clow, "I spent a lot of time at the beach surfing. If the temperature soared above 80 degrees and the waves were four feet high, I didn't bother going to class!" He was eventually drafted into the Army at the height of the Vietnam War. Clow's illustrative abilities got him assigned to the White Sands Missile Range in New Mexico. After his tour of duty was up, he went back to school, taking design courses at Long Beach State.

After the Army, he was hired as a paste-up artist at a local design studio. His first agency art directing position was with NW Ayer's west coast office. Frustrated by "only okay work getting produced," Clow remained there a couple of years.

Inspired by the creative revolution of the just-completed decade of the sixties, Lee Clow was deeply influenced by the DDB team approach to advertising. At the time, it certainly caused a frisson of excitement, sending much needed shock waves of creativity throughout the industry. Wanting to have his cake and eat it too, Lee Clow set out to search for the perfect west coast agency that aspired to DDB's principles. He simply refused to trade in his bathing trunks for a Brooks Brothers suit.

Clow stumbled upon a young California agency called simply Chiat/Day whose creative credo was, "Let's do good ads." Back in 1971, it was two years old, had a staff of 30 and billings just shy of $15 million. Lee Clow was determined to work there. He got his book together and launched a campaign of persistence. Phone calls, letter writing and kind pestering eventually led to a scheduled interview withJay Chiat's associate, Hy Yablonka.

Clow, pumped for his big chance, waited patiently for Yablonka, who forgot about the meeting, instead opting for a long lunch. Resolved to seeing Yablonka at any cost, Clow staked out the building's lobby poised for his return. They met. Although Chiat/Day was not hiring, Yablonka did give him a great deal of time and constructive criticism.

In January of 1973, Lee Clow's tenacity finally paid off. He was hired by Chiat/Day as an art director. Clow recalls meeting Jay Chiat a day before he was to begin work. Chiat simply told him in his inimitable style, "Work hard and maybe you'll do some good ads."

Clow, under Jay Chiat's unorthodox working environment, was given great opportunities to grow. The agency was and still is, according to Clow, "a great forum of free association fostering creativity."

For someone whose formal training was in art and design, Lee Clow literally taught himself advertising. The on-the-job training provided by his boss, Jay Chiat, coupled with his well-thumbed prized possessions, a collection of New York Art Directors Club and Communication Arts Annuals from the 1960s, Lee Clow began his career in the world of advertising. So in tune with the swell of creativity spawned in the sixties, Clow even today goes back in time for help in creating new concepts when he needs inspiration.

In 1977, Lee Clow began his trip up the ladder at Chiat/Day. Notorious for shunning titles and the limelight, Clow was nonetheless promoted to associate creative director. In 1982, he became creative director of the Los Angeles office and two years later, he was named president, chief creative officer (and senior art director) of Chiat/Day/Mojo.

Clow attributes his success to Jay Chiat's anti-establishment concepts of horizontal management. "You must have a combination of talent and a good environment to work in, in order to excel," Clow says. Witness the open air atmosphere of Chiat/Day's offices. All are equal in size with no closed doors. Management is always accessible to both staff and clients. They really do consider themselves family.

The list of risk-taking entrepreneurial clients the agency has served over the years proved to be perfect foils for Clow's unique and quirky creativity. His work for Apple Computer, California Cooler, KCBS, KNBC, Nike, Nissan, Olympia Beer, Pacific Northwest Bell, Pioneer Electronics, Pizza Hut, Porsche and Yamaha helped create a counterculture and state of mind in advertising that quickly spread across the country like a forest fire. It was advertising California style; it simply could not be ignored or duplicated in the button-down corridors of Madison Avenue. Through his clients, Lee Clow taught us that "California Dreamin" was no longer just a song reminiscent of pop culture, but a very serious and viable force advertising could not resist recognizing.

All one has to do is flip through the new coffee table book,Chiat/Day, The First Twenty Yearsto see Clow and his agency's incredible metamorphosis unfold. His Apple Computer "1984" spot. A concept so fresh, yet disturbing, it's been heralded as a classic from both a cinematic and advertising standpoint. Clow's irreverent "lifestyle" spots for California Cooler seem very autobiographical. Who better to portray a bunch of well-tanned surfers partying, dude?

Clow's most upbeat slice of California life shines through in his "I Love LA" spot for Nike. Randy Newman in an old red Buick, cruising down the boulevards singing, "From the South Bay to the Valley, from the west side to the east side, everybody's very happy 'cause the sun shines all the time." It's intercut with a wonderful montage of celebrities and ordinary people shot against a beautiful and glitzy LA background.

Lee Clow openly admits, "I haven't yet done an ad I'm totally happy with. When I reach that stage of the game, I guess I'll retire and go into the aluminum siding business." For Clow, as long as the forces of passion and insecurity tug at his creative psyche, he'll continue to search for that "all-elusive, perfect ad."

Interestingly enough, Lee Clow has two heroes he's quick to mention:Walt Disneyand Hobie Alter. Hobie Alter, you ask? Who's he? Alter's name graces many a surfboard and catamaranthe Hobie Cat, for one. Clow idolizes Disney because of his natural artistic abilities and uncompromising determination to succeed regardless of life's roadblocks. Also because he reached a point in his life that permitted him to attend board meetings in shorts and sandals!

In order to maintain harmony and stasis between his career and private life, Lee Clow still enjoys surfing, cruising to Catalina Island with his wife of 21 years, and yesattending meetings in his ever-present shorts and sandals! He also finds great solace commiserating with his two dogs on the finer points of advertising, especially after interminable client meetings. "It's very therapeutic," Clow says.

Lee Clow's stark individualism makes him a prime candidate for the "guru" of the west coast school of laid-back advertising. When asked to comment on his induction into the New York Art Directors Club Hall of Fame, Clow paused for a moment and said, "It's quite an honor, yet ironic, too. Since my goal was to do good ads without having to move to New York."

From $15 million in billings to $1 billion, from 30 employees to 1500, Lee Clow is still Lee Clow and Chiat/Day is now Chiat/Day/Mojo.

Should you happen to see a large, bearded man decked out in shorts and sandals engaged in an animated conversation with two dogs on a sandy beach in Venice, California, chances are it's Lee Clow. He's probably in the midst of explaining to them his philosophy of life. With apologies to Carl Lewis's Nike spot, "Never give up. There's no telling how far you can go..."