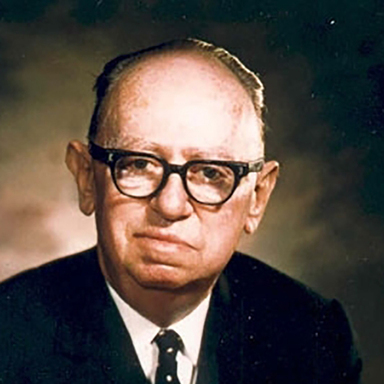 The Depression had a firm grip on Chicago in 1935. But this didn't deter Leo Burnett from mortgaging his home and borrowing on his life insurance in a $25,000 gamble despite the fact that he had a wife and children to feed. And when he put a bowl of red delicious apples out on the reception desk to greet visitors to his eight-man office the odds had it on the street that he wouldn't last out the year. Three clients came and stayed for more than a decade because they believed in Leo Burnett's goal: to create advertising "that talked turkey to the majority of Americans."

Years later, David Ogilvy commented on Leo Burnett's statement: "I wonder if he realized that his kind of advertising could also talk turkey to the majority of people in every other country!"

Born in St. Johns, Michigan, Leo Burnett showed early interest in art, designing and illustrating posters for his high school football team and for his university's opera and theatre productions. After graduation from the University of Michigan he found himself working as a full-time journalist for the Peoria Journal. He had already gained a lot of experience as editor of a number of campus newspapers and magazines. After covering corrupt municipal politics and murder trials without a byline for $18 a week, Burnett was finally rewarded in 1915 with both a byline and a new biweekly column on railroads which ran for three months: "Right of Way, a Column About Railroads and Those Who Run Them. "

But he realized that the railroad was not America's future: it was the automobile. His own paper's auto column had grown to a full section, and an old classmate of his had gotten a job as house organ editor for the Packard Motor Company. Enlisting the aid of his favorite English professor Dr. Fred Newton Scott, Burnett landed a job starting a House Organ for the Cadillac Motor Company in Detroit. This was after a skeptical first interview and the test assignment of writing a "bromide" about the importance of cleanliness in selling automobiles, and waiting two months for a reply and a final interview.

Cadillac was where Burnett got his first taste of the advertising world. There he met Theodore F. MacManus, the creator of Cadillac's million plus print ad "The Penalty of Leadership." As a part of his editorial duties, he covered publicity for Cadillac at the New York and Chicago auto shows. Burnett's publicity and contact work earned him the position of advertising head for the company within a couple of years. While he was in Detroit, he met and married his wife of over fifty years Naomi, who stood by his side from that point on. (She even helped him practice semi-four while on their honeymoon before he left for active service.)

A year after World War I, Leo Burnett became the advertising manager for the newly formed LaFayette Motor Company located in Indianapolis. The car was designed to compete with the Cadillac and Rolls Royce in luxury and price. (Leo and Naomi, however, were driving a Ford sedan with a self-starter. They did manage to test drive an experimental LaFayette, which caught fire the second day they had it out.)

Leo's first project for the company was to find an ad agency to handle this elite market. After gleaning through theSaturday Evening Postfor the best campaigns he could find, he picked the Chicago-based Erwin, Wasey and Company.

Burnett went to Chicago one Saturday morning to call on them. "I discovered that, even in those days, some offices were closed on Saturdaysat least this one was."

Sitting in an unlit reception room, he hailed a mailroom clerk to ask if Mr. Erwin was in. Neither Erwin nor Wasey were in on Saturdays.

Only one person was available to speak to him: the copy chief Art Kudner who was sitting in front of his typewriter in his shirtsleeves. He was writing a Goodyear tire ad in his tiny office. Burnett asked him if the agency would be interested in handling the LaFayette Motor business. Of course, Kudner's answer was affirmative. So, Burnett told them it was theirs: a transaction that took all of five informal, unannounced minutes.

The ad campaign was simple: familiar road sights executed as line drawings with a quick run of clean copy. They only ran 200 lines deep in the newspapers, but even the dealers remarked how effective they were.

Unfortunately, the $7000 price tag per car was a little steep for the 1920s buying market and only 700 cars were sold. The company decided to reduce expenses by moving to the smaller town of Kenosha, Wisconsin. Prices for labor and material prices were soaring nationwide, and belts were tightening on luxury spending. The car had come on the market right in the midst of a serious recession and couldn't survive after sales plummeted in 1924.

Burnett had purchased $2000 worth of LaFayette stock when he joined the companypaying partly in cash and partly in a bank loan. When LaFayette failed, he had to pay off the bank loan, despite the fact he was without a job, had a new baby son and a wife to support.

He joined the Indianapolis agency Homer McKee, where he wrote and laid out his own ads. His accounts were the Marmon, Stutz, and Peerless automobiles.

In 1930, things started to go bad with these accounts. So Burnett contacted Art Kudner and ended up taking a standing offer: working at Erwin, Wasey in Chicago for the next five years.

The Burnett agency landed one of its biggest early clients in 1942 when Leo cold-called the Santa Fe Railroad after hearing that they were reviewing the account amongst thirty-four contenders: Burnett was the thirty-fifth. He sent his best writer Jack O'Kieffe on the Super Chief to Los Angeles that night with the instruction to write his entire experience and telegraph it to ChicagoASAP. The longest telegram ever to be wired to the city arrived shortly thereafter. Thirty-nine hours after his initial meeting with the railroad executive, Burnett and Dick Heath arrived armed with a leather-bound presentation case stamped with the Santa Fe insignia, containing 5000 words about the romance of trains and the Southwestern landscape. They won the account.

The American Meat Institute, and The Minnesota Valley Canning Co. (now called the Green Giant Co.) also took a chance, and Burnett's investment grew. The Burnett logoa hand reaching for the starsreflects the founder's philosophy of supporting the creation of superior advertising and the cultivation of lasting relationships.

It's not often in the advertising business that one man's dream, spurred on by deeply seated determination and relentless hard work creates client-agency matches maintained for decades, but Leo Burnett cultivated some very solid bonds that are still going strong: Green Giant (1935), Philip Morris Co. (1954), Pillsbury (1944), Kellogg's (1949), Proctor & Gamble (1952), Commonwealth Edison (1954), Maytag (1955), Allstate (1957), Heinz Pet Products (1958), Starkist (1958), First Brands (1961), United Airlines (1965), General Motors Oldsmobile (1967), and Keebler Co. (1968) are just a few. Brand identity characters developed under the watchful eye of Burnett include: the Jolly Green Giant, Pillsbury Dough Boy, Tony the Tiger, the Marlboro Man, Charlie the Tuna, and the Keebler Elves. And slogans like "You're in Good Hands with Allstate" and "When You're Out of Schlitz You're Out of Beer" have brought America's buying public running for more.

When Philip Morris came to Burnett with the Marlboro business in 1954, the cigarette had the smallest market share in its category. A complete repositioning of the product and implementation of a strong advertising strategy changed the tide. In the sixties, Burnett introduced "Marlboro Country" using the musical score from the filmThe Magnificent Seven. The popularity of this campaign led to the rise of Marlboro to the number one slot in market share by the end of the decade.

The concept remains the base creative strategy for the product to this day. But with the implementation of Burnett's marketing strategy on the account, a new nontraditional medium was developed for the products that maintained strong imaging continuity throughout. The Marlboro Adventure Team was a year-long promotion that included producing print ads, point-of-sale materials, and a catalogue full of Marlboro gear: clothing and other cowboy and autoracing paraphernalia, like belt buckles and lighters, emblazoned with the Marlboro logo.

The fifty-five full-service offices of Leo Burnett are located in 49 countries with combined billings last year of $4 billion. International billings of $2.2 billion in 1992 placed Burnett in the forefront of worldwide agencies: nearly quadrupling their business in this sector in the last seven years alone with additional clients like McDonald's, Hallmark Cards, Miller Brewing Company, Samsonite, and H.J. Heinz.

And, not surprisingly, a bowl of red delicious apples still sits on the reception desk in every Burnett office around the world.