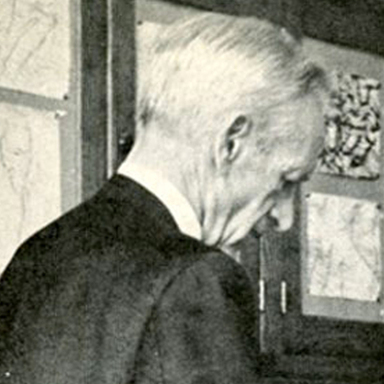 Born in Warsaw, Poland in 1902, Leon Friend came to the United States at the age of three. He received both his Bachelor and Master degrees from New York's Columbia University.

In 1930, he began his teaching career at Brooklyn's Abraham Lincoln High School. There he became the school's first art department chairman. It was during his almost forty years of inspiring work as an educator that Leon Friend roused the creative juices to flow from his students. He always invited other artists to guest lecture and encouraged everyone to participate in art and design competitions. Friend also founded The Art Squad, an elite group of his students, who created posters and decorated the school's bare walls at a moment's notice.

Through the years, Leon Friend garnered numerous awards and praise from peers and former students. The Architectural League of New York honored him with an exhibition in 1969 entitled "The Impact of One Art Teacher" and in 1972, The Brooklyn Museum began an advertising and printmaking scholarship in his name that was sponsored by The Art Squad, Inc., an organization of successful art directors, artists, designers and photographers who had studied with him. Friend was also co-author with Joseph Hefter ofGraphic Design, published by McGraw-Hill in 1936.

Although Leon Friend passed away in 1969 at the age of sixty-seven, his infectious motivational and creative spirit is still present. Leon's former students see to that! Their work is a direct descendant of his.

Please note: Content of biography is presented here as it was published in 1987.
Photo by Alex Rosenberg, 1969.