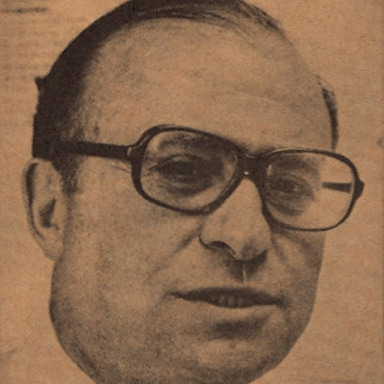 Louis Silverstein is probably the only art director ever to be nominated for a Pulitzer Prize, a nomination that was put forward by A.M. Rosenthal, executive editor of theNew York Times. In Rosenthal's opinion, "Everybody who knows anything about American newspapers knows that Lou Silverstein ranks as the outstanding newspaper designer in the country." Silverstein did not win the award; there is no Pulitzer category for simply designing newspapers. In fact, until Silverstein effected the transformation of theTimes, such a job description would never have been found in the classifieds.

While artists have not been unknown to newspapers, the idea that they would join in taking creative responsibility was unthinkable for most newspaper managements. In reshaping the 'gray face' of theTimes, Silverstein and his editorial colleagues achieved a new journalistic look full of character, style and liveliness, and so brilliantly formatted its detail that it has the ability to bring graphic surprises in each new issue. As well as increasing circulation and gathering countless awards, the redesign has also had a widespread effect on newspapers throughout the world whose managements have sought out designers to change and enliven their own journals.

Today, Silverstein is Corporate Art Director of theTimes, a position he has held since 1969, which embraces the daily and Sunday editions, the 28 other newspapers in the Times Company, many of which he has also redesigned, and all 45 communication companies, includingFamily CircleandGolf Digestmagazines. In addition, as assistant managing editor of theTimes, he is also deeply involved in editorial, managerial and policy decisions.

A native New Yorker, Silverstein found his way to theTimesby a rather roundabout route. With a Bachelor of Fine Arts degree from Pratt Institute, like so many art directors, he started his working life in the advertising industry in New York, then spent three years designing graphics for the U.S. Air Corps. Out of the service, he went back to school for his Master's degree at the Chicago Institute of Design (the new Bauhaus) where his thesis concerned individual responses to tactile experiences. Here in Chicago he began painting in earnest and soon was exhibiting with the American Abstract Artists, a group that at times included Mondrian, George L.K. Morris and Louise Nevelson. Later, in 1964, he was represented in the U.S. Information Agency's major exhibit of drawings and graphics in the Soviet Union.

In Chicago, he was influenced by a variety of experiences. A speech made byGyrgy Kepes, on design as a bridge between man and society, made an enormous impact on him. He had business cards printed up that read, "Designs for People. Assignments came from the Cooperative League of America and, after a meeting with A. Philip Randolph, from the American Federation of Labor and then the U.S. Department of State for corporations for whom he produced graphic, colorful and fast-moving filmstrips. This led him to the State Department's publications branch where he served as art director ofAmerika, the Russian-language magazine distributed in the USSR and satellite nations.

Silverstein was ready for theTimesin 1952 where he joined the promotion department underGeorge Krikorian, Irvin Taubkin and Ivan Veit. "These were enormously creative people. I felt privileged to work with them," Silverstein recalls today. A year later, having inherited Krikorian's mantle as art director, his promotion designs captured 18 awards in the AlGA design show and he was put in charge of promotion both for the newspaper and the company's radio station, WQXR.

SoonGraphismagazine was commenting that his posters, mailing pieces, educational booklets and ads promoting the Times "had raised current graphic standards." Moreover, his "I got my job through the New York Times" promotion campaign, one of the most memorable in recent history, may also prove to be one of the longest-running and it may be said with some degree of truth that Silverstein got his present job through that campaign. Not content with hisTimesduties alone, he continued his painting and yet found time to co-authorAmericas Taste(Simon & Schuster), a book that reviewed the cultural events of the past century as observed through the feature stories in theTimes. In another role, he chaired events for the Society of Publication Designers and the American Institute of Graphic Arts, and in 1967 helped to run a four-day "Design-In" for the Institute of Ecological Studies in Central Park.

Louis Silverstein is an affable, self-possessed individual who does not at first glance seem to be the type to lead a revolution, but that is precisely what happened when theTimeswent through a period of great expansion, acquiring a variety of subsidiary firms, newspapers and magazines. With this broadening scope came the demand for a new look for the flagship publication. First, Silverstein was assigned to the book review section. Instead of giving it the expected typographic restyling, he changed everything from column widths to artwork. The concept for the new op-ed page, under the direction of John Oakes, editorial page editor, and Harrison Salisbury, editor, set editorial illustration in a new direction because the art commissioned from fine artists and illustrators throughout the world did not depict the articles, but rather suggested emotions and ideas. Although there was no master plan for the paper, Silverstein, with editors A.M. Rosenthal, Seymour Topping and Arthur Gelb, succeeded in producing innovations one after another. Out of their efforts came their pace-setting new sectionsSports Monday, Weekend, Style, Home, Science, plus a largely new Sunday paper. Always a national standard for editorial content, theTimes, with a full measure of Silverstein's creativity, became a hallmark for journalistic design.

Massimo Vignelli sees far greater import: We are affected by all the factors in the environment around us," says the designer, "and nothing is more ubiquitous than the newspaper. By changing theTimesand influencing so many newspapers in other cities, we are indebted to him for improving the quality of our lives."