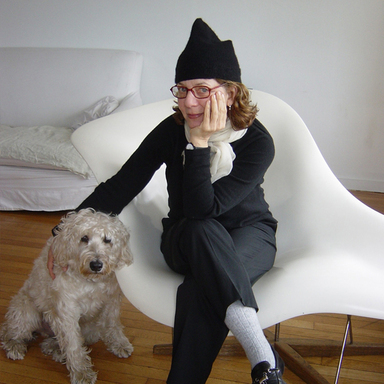 Maira Kalman was born in sandy, breezy Tel Aviv in 1949. Her family moved to New York City in 1954 where hamburgers and onions were frying.

She easily adapted to her new country, learning the language quickly, but refusing to pledge allegiance to the flag each morning in school.

She studied music at the High School of Music and Art; literature at New York University. After college, she began to draw. After a number of years as an editorial illustrator, she began to write and illustrate childrens books. She has written and illustrated a dozen. They include Hey Willy, See The Pyramids, Max Makes A Million, Fireboat: The Heroic Adventures of the John Jay Harvey and What Pete Ate from A-Z.

She worked with her late husband Tibor Kalman at M&Co, an interdisciplinary design studio that he founded in 1979. The studio produced a number of products that the Museum of Modern Art now distributes.

She now writes and illustrates pieces for The New York Times, The New Yorker, Departure, Culture + Travel and other publications. She and Rick Meyerowitz created the NEWYORKISTAN cover for The New Yorker. They have also created a subway map of New York, replacing every stop and location with a food item. Dont they have anything better to do?

She has created an illustrated version of Strunk and Whites classic, The Elements of Style. A short evening of song based on the book, was created by the composer Nico Muhly. The concert was performed in the main reading room of the New York Public Library; a place that is supposed to be silent.

That night, Ms Kalman (a member of the Omit Needless Words orchestra) performed on the clattering tea cup and saucer and the slinky.

Her yearlong illustrated column for The New York Times Select, called The Principles of Uncertainty, has been compiled into a hefty tome published by the Penguin Press.

Other clients include Crate & Barrel, Mark Morris Dance Company and Vitra. She has created fabrics for MAHARAM and Isaac Mizrahi, as well as accessories for Kate Spade.

She teaches design at the School of Visual Arts Graduate Division. She has received numerous awards and honors, including The New York Times Best Illustrated and the Horn Book Award. The Society of Publication Designers and the Art Directors Club have honored her. She was a finalist in the National Design Awards, spoke at the TED conference and is the cofounder of the Rubber Band Society.

Her work is shown at the Julie Saul Gallery in New York City.

She is now in the process of working on a number of books. She lives in New York City with her dog Pete. She is trying to maintain a good sense of humor. Her children are nearby and visit often.