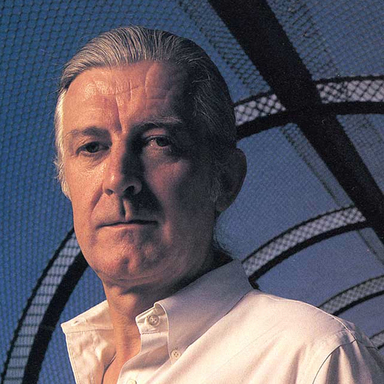 Matthew Carter was born and raised in England, son of the typographic historian Harry Carter. On leaving school in 1955 he spent a year at the Ensched typefoundry in the Netherlands learning to make metal type by handa skill that proved to be commercially obsolete. To earn a living he had to adapt to drawing alphabets for modernist designers in London who were frustrated by the lack of contemporary sanserif typefaces in Britain at that time. His background, therefore, is a technical one; as a designer he is self-taught. If there is a theme to his work over the past 50+ years it is the relationship of design to technology during a period when the tools for making and setting type have changed more radically than at any other time in history. He has been able to make type by essentially all the methods ever used: metal by hand, metal by machine, photoset, digital, desktop, screen (and a woodtype for letterpress posters, a recent commission).

In 1965 Carter was hired by Mergenthaler Linotype in New York as staff designer with the job of exploring the implications of photocomposition, the change from type as a three-dimensional metal object to a two-dimensional photographic image. Snell Roundhand, designed in 1966, took advantage of the new medium by introducing a style of type, a joining script, that had been impossible to make in metal but worked well in _lm.

The next technology, digital type, proved to be a mixed blessing for the designer. In the 1970s AT&T began to use pioneering high-speed digital systems to accelerate production of the US telephone directories. Their existing typeface performed badly under the new conditions. A replacement was commissioned from Mergenthaler to be designed for printability. Since the new type was to be digital Carter had to teach himself to work digitally. At that time there were no computer tools that could convert an analog image to a digital bitmap. Every single character of Bell Centennial, therefore, had to be drawn on graph paper, pixel by pixel, and encoded at a keyboard. This was an epic task of hands-on designing, but it paid off in the education it provided the designer.

Carter, in a long association with the Linotype companies, designed ITC Galliard, Helvetica Compressed, Shelley Script, Olympian (for newspaper text), and faces for Greek, Hebrew and Devanagari. In 1981 he joined with three ex-Linotype colleagues to start Bitstream, a digital typefoundry, in Cambridge, Massachusetts. He worked there for ten years, leaving with one of his co-founders, Cherie Cone, to start Carter & Cone Type in 1992. At that date the personal computer and, as importantly, open font formats, were making independent typefounding a viable business. It became possible to design typefaces and make fonts in much the same spirit that punchcutters had worked in the early centuries of types history. For Carter, whose temperament considers designing and making virtually inseparable, the last 18 years have been the most rewarding.

In addition to retail fonts for general license (Mantinia, Sophia, Big Figgins, Big Caslon, Miller), typefaces have been commissioned by Time, Newsweek, U.S. News & World Report, Sports Illustrated, Business Week, The Washington Post, The Boston Globe, The Philadelphia Inquirer, The New York Times (the paper and the magazine), The Guardian and Le Monde. Other custom types have been designed for the Walker Art Center, the Museum of Modern Art, and Yale University.

In the mid-90s Carter started working with Microsoft to develop the screen fonts Verdana and Georgia whose priority was legibility in the inhospitable technical environment of computer monitors. A pro_le in The New Yorker of December 5, 2005, began: Matthew Carter is often described as the most widely read man in the world. Carter designs typefaces. If this is true it is because Verdana and Georgia, distributed freely by Microsoft, have become ubiquitous in contemporary screen-based visual culture.

Carter has taught a class at the Yale graphic design school for 30 years. He lectures frequently at conferences and schools. An exhibition of his work, Typographically Speaking, opened in 2002 and traveled to several American cities. A book of the same name was published by Princeton Architectural Press.

Please note: Content of biography is presented here as it was published in 2010.
Photo by: Steve Lewis