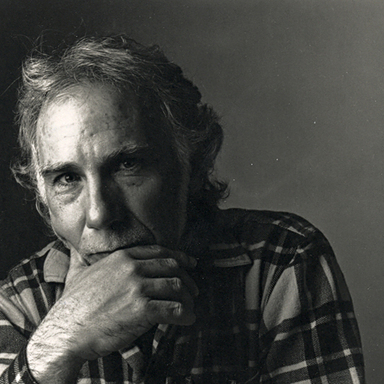 Meeting with Mike Tesch is like communicating with a spirited, soft-spoken, gray-bearded philosopher in a disconcertingly dark corner office. Blinds drawn, the only light comes from a harsh table lamp that glares out from a desk crammed with storyboards, reels, and books ranging from Eisenstadt to Ogilvy. "I was a very insecure and protected kid. My mother sheltered me with the hope I'd become a dentist." Fortunately Tesch did not accede to his mother's wishes. He has, however, touched countless people with his unique brand of advertising.

Born in Brooklyn in 1938, Tesch and his family moved to Far Rockaway, Queens, a year later. His first encounter with art came at Far Rockaway High School where he worked on the yearbook art staff before graduating in 1954. Tesch remarks, "I got As in Art while other kids got As in Math." After graduation, he moved back to Brooklyn, once again enjoying the sights and sounds of that special melting pot. The ethnic variations there eventually helped shape his advertising.

After graduating from Pratt Institute in 1959, Tesch decided to take some design courses at the School of Visual Arts where he encountered his first inspirational figure, teacher and designerBob Gill. Gill taught Tesch how to think conceptually.

Bob gave me a good kick in the butt. He taught me not just to decorate a page, but to have an idea and make sure you always say something, be it a letterhead or a matchbook cover. He sent me on my way and was certainly one of the most unforgettable characters I've met.

Armed with the gospel-according-to-Gill, Tesch landed his first job, inRedbooks promotion department. With his boss, art director Mike Pennette, the two helped make the department one of the best in the business. As a result, Tesch won his first AlGA award, the first of hundreds.

Sensing the urgency to get "artsy," Tesch leftRedbookin 1961 for greener pastures. He showed his portfolio to future ADC Hall of Famer,Tony Palladino, who suggested he see designerIvan Chermayeff(another future Hall of Famer). Chermayeff immediately hired Tesch as a senior designer. At Chermayeff & Geismar Associates, Tesch worked on a wide variety of assignments for Pepsi-Cola. One was a poster announcing a Pepsi-sponsored exhibition on Pop Art. EntitledVernacular America, the poster was done in lime green with the announcement in a comic-book dialogue balloonreminiscent of Roy Lichtenstein without a comic-like visual. The exhibition, as Tesch recalls, was probably one of the shortest on record.

I had a pink Cadillac parked on the sidewalkright in front of Pepsi's headquarters on Park Avenue. The president of Pepsi arrived and was outraged because Pop Art was "un-American." We had to strike the show the very next day.

Wanting to do ads and commercials, Tesch left graphic design and embarked on his advertising career. In 1965, he was hired by his former boss, Mike Pennette, who had just formed his own agency, Fladell, Winston & Pennette. Tesch found himself working on clients such as Lender's Bagels, The Associated Press,Evergreen Review, and King Features. His admittedly non-memorable work, coupled with the company's instability, resulted in his being fired.

Advertising history was made the very next day. Tesch, unemployed, calledAmil Gargano, an art director at Carl Ally Inc. Gargano arranged for Tesch to meet withEd McCabeand Ralph Ammirati, who agreed with Gargano's assessment of Tesch's work. Tesch was hired at Carl Ally Inc. in August 1966. To this day, Tesch believes he was hired because the agency needed a good shortstop to play on their softball team!

His first assignment for Ally was Hertz Rent-a-Car. With writer Jim Parry, Tesch created trailblazing advertising. One that particularly stands out is "Death of a Traveling Salesman," which portrays the trials and tribulations of a modern day "traveler." Mike Cuesta's photograph of a mans suit wrinkled and shoulders rounded from carrying his overstuffed suitcases adds to the overall atmosphere of the concept. One vignette, for example, says:

You've just landed in a city that gets only seven inches of rain a year...All on the day you arrive.

Through the late 1960s and early 1970s, Tesch also worked on clients like Chris-Craft, Travelers Insurance, Pan Am, and Tonka Toys. Chris-Craft presented this creative challenge: How do you sell a $30,000 houseboat to someone who thinks he has no time left to use it? Tesch and writer Steve Smith solved the problem by producing a chart showing that the average person actually has four months off a year. The ad sold the boats!

His work for Travelers Insurance produced one of his most intriguing commercials. Entitled "Auto," the spot sold automobile insurance through the concept of showing a brand new car, legally parked, being crushed by a truck backing into it as the mortified owner comes out of an ice cream parlor. Created with writer Tom Messner, the spot was also an engineering feat, for, by using hydraulics and electronics, the car was crushed in 20 seconds.

His Travelers work also includes a very effective print ad. The visual shows a 55mph sign on a gravel highway shoulder. The copy states: "If saving your life isn't important, think of the gas you'll save."

Tesch's advertising for Pan Am is an example of perfect timing. The energy crises and recession of the 1970s all but killed airline travel. After eight consecutive years of losses, Pan Am needed a new concept to halt the skid. By taking advantage of theRootsphenomenon, Tesch and writer Tom Messner created Pan Am's "Heritage" campaign. "Every American has two heritages. Pan Am is going to help you discover the other one." Tesch, Messner, and ADC Hall of Famer, directorSteve Horncreated a spot called "Roots" about Americans going back to their ancestral homelands. Pan Am's revenues rose to a record $122 million.

A by-product of Tesch's work for the Tonka Toys account was his collaboration with writer Patrick Kelly and the beginning of a professional and personal relationship that still endures. To Tesch, Kelly is "unequivocally the best writer I've worked with. Without him, I wouldn't be here."

One of Tesch's favorite spots, "Elephant," was done for Tonka. To demonstrate how strongly built Tonka's toys were, the spot featured Nelly the elephant stepping on a yellow Tonka dump truck. Tesch recalls the shoot:

It took us weeks to make Nelly feel at ease stepping on the yellow truck. It seems she was afraid of yellow. When we put yellow in her path, she spooked. Steve Horn finally captured the moment on film and Nelly became a star.

Toward the end of the 1970s, Tesch was selected as one of "America's 100 Outstanding Creative People" byAdDay/USA. Carl Ally Inc., now known as Ally & Gargano, rewarded him for his creative efforts by making him a vice president and creative director. And along came Federal.

The overnight delivery business was a new and exciting service to consumers in 1976. The Federal Express account was a fabulous vehicle for Tesch's random studies into the vulnerabilities of human behavior. He took the basic elements of fear and anxiety and exploited them in bizarre, comic ways that have yet to be duplicated. With Patrick Kelly and directorJoe Sedelmaier, Tesch helped make Federal the country's leading overnight courier. With spots like "Paper Blob," "Fast-Paced World," "Pacing the Floor," "Promise Them Anything," and others, consumers and advertisers were propelled into a world of slapstick frenzy. Ally & Gargano and their client dominated advertising and have the awards to prove it. In a span of four years, 1978-82, Tesch won ten ADC Gold Awards for his Federal Express commercials. The spots are even included in the Smithsonian Institute's permanent collection of modern advertising.

Tesch says that the key to the incredible success of the Federal Express commercials was the client's willingness to take chances. The spontaneity associated with these classic spots could never have happened if Federal had conducted the customary research and test marketing. "You can't animate humor," Tesch emphatically insists.

In 1981, Tesch, along withBill Bernbach, Ed McCabe, and Hal Riney, was elected toAdweek's "All American Creative Team." He is now a member of Ally & Gargano's executive committee and Executive Vice President and Director of Creative Services. Despite the management titles, Tesch continues to create exceptional advertising.

If I'm going to do something, I'm going to do it right. I'm not one of those people who bury themselves in a newspaper while riding the subway. I look around at faces, expressions, and body language. I don't close myself off. I'm always learning.

Tesch has already given the advertising business a legacy of love, compassion, sensitivity, and of course, humor. His intensity and dedication to his craft are reflected in his work. Perhaps fellow ADC Hall of Famer Amil Gargano has said it best:

Mike is an enormously tenacious guy. Once you give up, nothing very good happens. Mike has never given up.