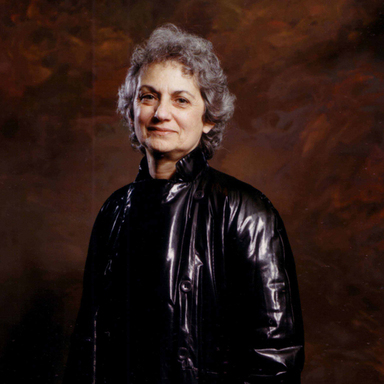 I guess Im never sure that print is truly linear, Muriel Cooper said. Its more a simultaneous medium. Designers know a lot about how to control perception, how to present information in some way that helps you find what you need, or what it is they think you need. Information is only useful when it can be understood.

Perhaps no one has had a greater affect on the way informationprinted and electronicis presented today than Muriel Cooper. As founder and co-director of MITs Visual Language Workshop, her explorations into the interactions between technology and design broke new ground in both graphic design and computer interface development. She designed covers for more than five hundred books, over one hundred of which have won design awards, and she was the second recipient of the American Institute of Graphic Design leadership award.

Muriel Cooper was born in Brookline, Massachusetts, received her B.A. from Ohio State in 1944, and a B.F.A. in design and a B.S. in education from Massachusetts College of Art. She then moved to New York, aiming to get into advertising. Paul Randwas one of the first people I met with, Cooper said in an interview. He was very critical of my typography. I had a mission: design was a way of life.

In 1952, Cooper began at MIT Press, designing its logo and founding the Office of Publications, now called Design Services. In 1958 she left to pursue a Fulbright scholarship in Milan, and then ran her own graphic design studio in Boston. In 1967 Cooper rejoined the MIT Press as its first art director. In 1974 Cooper began teaching a course at MIT called Messages and Means, exploring her interest in the intersection of typography, graphic design, and technology.

She joined the Department of Architecture in 1977, the first graphic designer to do so, and later co-founded and directed MITs Visible Language Workshop at the Media Laboratory, which became the center for research and study around a field that was just beginning to emerge, essentially a new medium.

What is this new medium? In general its outstanding characteristics are dynamic in real time, interactive, incredibly malleable, some capability of learning and adapting to the user, or to information, or to some other set of relationships. Our goal is to make information into some form of communication Information by itself does not have the level of filtering that design brings to it.

Coopers work was not limited to new computer interfaces. She brought the interactivity of computers to the page. I thought about books as being like a movie. Once I presented the Bauhaus book as a single-frame movieshowing all the pages in rapid succession. It was fantastic.

Cooper also taught at the Museum School of Fine Arts, Simmons College, the Massachusetts College of Art, Boston University, and the University of Maryland, and lectured at other college campuses across the country. Bill Mitchell, dean of MITs School of Architecture and Planning, said, Muriel was a real pioneerI think she was the first graphic designer to carry out really profound explorations of the new possibilities of electronic mediathings like 3-D text. She understood from the beginning that the digital world opened up a whole domain of issues and problems, and she wanted to understand these problems in a rigorous way.

In an interview shortly before her death, Cooper said, When you start talking about design in relation to computers, youre not just talking about how information appears on the screen, youre talking about how its designed into the architecture of the machine and of the language. You have different capabilities, different constraints and variables than you have in any other medium, and nobody even knows what they are yet.

Muriel Cooper died in 1994 at age sixty-eight, the only female tenured professor in the MIT Media Lab. She made gigantic leaps forward, garnering the attention of even Bill Gates. She changed the way the design world thinks about typography, and her contributions have been described as epic. Cooper was eulogized inWiredmagazine, and in 1997 a prize in her name was established at the Design Management Institute to honor individuals who challenge our understanding and experience of interactive digital communication.