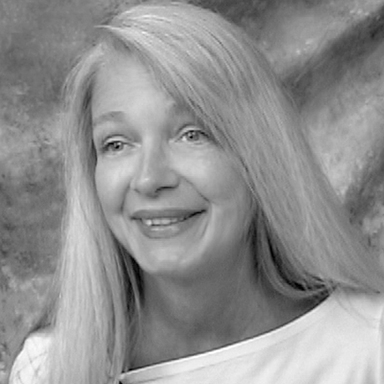 There's a story about a copywriter who once slammed his fist through Nancy Rice's office wall in a fit of frustration. The story is true. The writer in question had just learned a painful lesson: when working with Nancy, it's best to check your ego at the door. As everyone discovers sooner or later, she will not be intimidated, cajoled, coerced, threatened, lambasted, bribed, begged, bored or even complimented into accepting an ideahers or yoursunless and until she's convinced of its rightness and originality.

That's not to suggest that she was ever one to lose her temper or behave with anything less than grace and aplomb. On the contrary, when confronted with a bad idea she had a simple and effective solution. Nancy would sit back from her drawing board and patiently wait until her sometimes exasperated creative partner was ready to return to the hard work and, yes, fun of making great advertising.

Nancy has always had a way of keeping people honest, of getting the best from both herself and others. Sometimes when it meant serious sacrifice on her part. Sometimes, in fact, when it would have been far, far easier for her to settle for pretty good rather that great. Compromise was just never part of her vocabulary.

She was born Nancy Coleman in 1948 in a small town on the Minnesota prairie called Clara City, where the tallest building was a grain elevator, right square in the middle of flyover land, to modest parents of Irish/German descent in a modest home. Eighteen years later, after her family had moved to the Twin Cities, Nancy's obvious artistic gifts got her into the Minneapolis College of Art and Designan experience she still credits with opening her eyes to a world of possibilities.

Working three jobs, she paid her way through school, marrying fellow student Nick Rice in her senior year. Following graduation she landed a job at Knox Reeves, one of the Twin Cities better ad agencies. When Knox Reeves hit a bad patch and folded in 1974, it was bought by Bozell and Jacobs and Nancy stayed on.

Gradually at first, and then with increasing frequency, she had by now begun to turn out smart, witty and hard-to-ignore ads for a variety of clients. Tellingly, every writer she worked with seemed to get better, yet when it came time to share credit she always bent over backwards.

Soon she was winning local and even national awards and getting regular calls from headhunters. As she now remembers when looking back, she was pleasantly astonished at her own burgeoning success. Then, in 1976, she gave birth to twin girls, Erin and Kate. And suddenly life became more complicated.

Never one to shirk responsibilities, Nancy approached motherhood with the same exacting standards she practiced in advertisingthis at a time when her career was just beginning to take off. Soon she faced a different kind of Sophie's choiceone that many American career women facenot of choosing between her children, but between her children and her very promising career.

In addition to all that advertising demanded, there was now Montessori, girl scouts, softball, school conferences, music lessons, dance lessons, trips to the mall, the museum, the dentist, the doctora veritable nonstop juggling act requiring that Nancy burn the candle at both ends.

Amazingly, she made it all work. Somehow the kids didn't suffer and the work didn't suffer. If she needed to leave work early to attend a teacher conference, she later burned the midnight oil. If she couldn't make it into the agency for a Sunday meeting, she'd come in at the crack of dawn on Monday to get up to speed. If she had to attend a sudden client meeting out of town, she'd somehow convince her sitter to stay the night.

Understandably, it was the kind of performance that boggled the minds of her colleagues. How did she do it? They wanted to know. What, exactly was her secret? After all, this was no ordinary career path she was on. The woman was nearing the very pinnacle of success. And not even a nanny to help out? Did she ever sleep? And just look at those kids, they're so incredibly normal!

Then, in 1981, with Kate and Erin barely in kindergarten, Nancy raised the ante even further when she left Bozell and Jacobs to become a founding partner in Fallon McElligott Rice, an agency that from opening day had its eye on the brass ring. Within a year both she and the agency were fast becoming famous. Her by now widely lauded campaign for The Episcopal Church was quickly followed by brilliant campaigns for Rolling Stone, ITT Life Insurance, The Wall Street Journal and others.

As her work grew better and better the honors flowed in from around the country and the world. Awards, of course, but literally dozens or them. Plus a growing pile of newspaper and magazine stories. Speaking engagements. Judging. The New York Art Directors Club Art Director of the Year Award. And on and on.

Nancy was on a roll.

With typical fearlessness she continued to amaze, opening Rice & Rice in Minneapolis with her husband in 1985. In 1986 she was featured in Esquire's "Esquire Register" of people under 40 who were changing the nation. In 1992 she joined DDB/Needham in Chicago as a Senior Vice President. In 1997 she was included in the British Design and Art Direction Book of the best art directors in the world (an honor accorded only six Americans). Early in 1999 she moved to Ogilvy & Mather/Chicago as a Managing Partner. And later that year she returned to Minneapolis as a Senior Vice President at BBDO.

In 2001, in a move that surprised some, she left the agency world for academia, becoming Worldwide Creative Director of the well-regarded Miami Ad School. And then in 2003in a move that Nancy describes as "coming full circle"she returned to her alma mater, the Minneapolis College of Art and Design, both to teach and help restructure the school's advertising degree curriculum.

All the whilethroughout the years of her meteoric riseNancy continued to raise her two daughters with the sort of hands-on love and attention that many stay-at-home parents would find daunting. And it wasn't as if life was getting any less complicated. There were, of course, the inevitable career ups and downs. In 1990 she was diagnosed with cancer and began a life and death battle she eventually won. And in 1992 her marriage ended.

Nancy likes to quote the actress Ruth Gordon: "In order to be somebody, you must last." Despite obstacles, she's done that and much more. Looking back at the breathtaking body of her work in advertising is nothing short of inspiring. But looking at her daughters Kate and Erin, now both successful fine artists with their own lives and families, may be even more inspiring.

There's another quote, this one from the self-effacing, down-to-earth, no-hidden-agenda Nancy herself: "What you see is what you get." What you get from Nancy Rice has never been less than extraordinary.