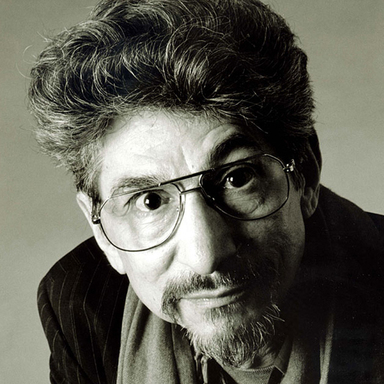 There is no more biting comedy than Stanley Kubricks 1964 doomsday film,Dr. Strangelove or: How I Learned to Stop Worrying and Love the Bomb. The film's frightening Cold War absurdity was established from the very first frame of the main title sequence designed by Pablo Ferro. As the ballad Try a little Tenderness plays in the background, B-52 bombers engage in midair coitus with refueling ships, underscoring Kubrick's theme that sexuality is endemic to all human endeavor, especially the arms buildup. Surprinted on these frames, the film's title and credits are full-screen graffiti-like scrawls of thick and thin Ferro-drawn letters; unlike any movie title that had preceded it. This was a titling masterpiece, and it was Ferro's first of many.

The Cuban-born Ferro (b. 1935) came to film titles as a director-editor of television commercials. In 1961, he founded the creative production studio Ferro Mogubgub Schwartz (which became Ferro Mohammed Schwartz after Fred Mogubgub left). As a consummate experimenter, Ferro introduced the kinetic quick-cut method of editing whereby static images, including engravings, photographs, and pen and ink drawings, were infused with speed, motion, and sound.

In the late 1950s, most live-action commercials were shot with one or two stationary cameras. Ferro took full advantage of stop-motion technology and shot his own jerky footage with a handheld Bolex. Unlike other TV-commercial directors, Ferro maintained a strong appreciation and understanding of typography. In the late 1950s, he pioneered the use of type in motion on the TV screen, often using vintage wood types and Victorian gothics.

After seeing Ferro's commercials, Stanley Kubrick hired him to direct the advertising trailers and teasers forDr. Strangelove, for which Ferro used the quick-cut technique employing as many as 125 separate images in a minute - to convey both the dark humor and the political immediacy of the film. TheDr. Strangeloveexperience was key to Ferro's transition from TV to film.

Immediately afterDr. Strangelove, Ferro created the main title sequence for Basil Dearden's 1964 Woman of Straw starring Sean Connery and Gina Lollobrigida. This now forgotten film offered Ferro a unique opportunity to experiment with a totally different technique that involved using high contrast film that reduced middle tones to solid black, which he then bathed through red filters. By overlaying positive and negative images, he created tension between the realistic and the abstract. Today this technique is one of the most common conceits used for openers of dramatic TV series, but back in 1964 it was new to the silver screen.

In 1964, Ferro launched Pablo Ferro Films and animated a landmark TV logo for Burlington Mills, which is still used by the textile giant. His next film title sequence was in 1966 when director Norman Jewison hired him forThe Russians are Coming, The Russians are Coming, a Cold War comedy about a mistaken U.S.S.R. "invasion" of a small New England island community by a lone Russian submarine crew. Ferro scoured type books for the most appropriate lettering until he found a Russian-style typeface where the Rs were reversed. "But something was missing," Ferro explained. "I asked a friend of mine, [illustrator] Charles B. Slackman, who suggested that I put a hammer and sickle in place of the G. After that it was perfect." Jewison loved it, but the studio didn't think it was funny and tried hard to kill it. Jewison stuck with it and Ferro designed the main title concept as dueling Russian and American flags fighting one another to occupy the screen.

For the titles forThe Thomas Crown Affair, also directed by Jewison, in 1968, Ferro introduced multi-screen effects for the first time in any feature motion picture, defining a cinematic style of the late 1960s. He applied the same technique to the film itself. Hal Ashby, the film editor onThomas Crown, suggested that Ferro edit a key sequence as multiple screens in order to speed up the narrative. Ferro cut a key scene into twenty or thirty simultaneous frames, reducing the time from six minutes to around forty seconds.

Compressing Ferro's career would necessitate one of his multi-screen special effects. He acted as supervising editor for Michael Jackson's 1983 music video"Beat it", and co-directed with Hal Ashby the Rolling Stones's concert filmLet's Spend the Night Together, in which he introduced time-lapse photography sequences. In 1987, he directed, produced, and editedThe Inflatable Doll, a primitive black-and-white film about a man who sells rubber female companions. In 1992, he directed his own feature,Me, Myself and I, starring George Segal and Jo Beth Williams.

Ferro's work is not always stylistically identifiable because he is more interested in making good films than in establishing an overpowering mark.

Please note: Content of biography is presented here as it was published in 2000.