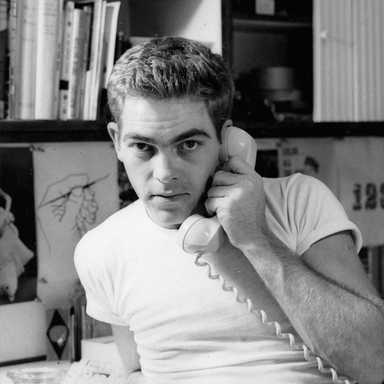 If one word could describe Philip Harrison Hays, it would be glamour, the old Hollywood kind. He had looks, style, and ambition, and he came of age near the end of an era when illustration still dominated advertising and publishing, and when great illustrators were stars.

Born in Sherman, Texas on May 14, 1930, Phil spent his formative years in Louisiana, joined the Air Force in 1950, and in 1952 enrolled at the Art Center College of Design in Pasadena. I had this gut feeling I wanted to get serious about art so I drove to L.A. It only took that one trip and a stroll through the student gallery to convince me.

In 1955, Hays moved to New York and enjoyed immediate success, stretching the conventions for romantic illustrations in magazines such as Seventeen, Cosmopolitan, Redbook and McCalls. His early watercolor approach, partly inspired by Vuillard, was often quite loose but also extremely detailed, wrote Steven Heller, who described him as one of a young band of expressive and interpretative illustrators, including Robert Weaver, Jack Potter, Tom Allen and Robert Andrew Parker who, rather than paint or draw literal scenes based entirely on an author's prose, interpreted texts with an eye toward expressive license. Hays said that representational illustration was an art of nuance, and his work routinely dug below the surface, drawing on Impressionist, Expressionist and Surrealist influences.

Silas H. Rhodes, a founder and president of the fledgling School of Visual Arts, was looking for strong new talent and in 1957 hired Hays to teach and later chair the illustration department. Younger than many of his students who were attending on the G.I. Bill, Hays introduced novels, plays and films as a way to increase visual and verbal literacy.

By the mid-1960's Hays work for fiction in Esquire and visual reportage inSports Illustrated ''had become darker and more serious,'' observed friend and artist James McMullan, and in the 1970s his emotionally arresting portraits of musicians from blues singers Bessie Smith and Billie Holiday to rock and roll legends Elvis Presley, Jerry Lee Lewis and Eric Clapton set a new standard for LP albums and the covers of Rolling Stone.

For nearly 24 years Phil Hays lived the life of a consummate New Yorker in a penthouse apartment on Central Park West where he threw parties, a home in Huntington, Long Island where he liked to ride horses, and finally in a loft in Noho as an intrepid pioneer of downtown. His circle of friends included movie actors Ben Piazza and Rita Gam, artist Andy Warhol and restaurateur Johnny Nicholson.

"I'm proud of that period of my life and all that work," says Hays, "But there came a time where I was working nights and weekends and thinking it had gone on long enough. I pulled a Garbo and quit. I felt complete with what I had accomplished and it was easy to move on. In 1978 Hays accepted an invitation from Art Center to head its illustration department and moved back to California.

For the next 24 years Hays proved to be as much of a force in education as he had been in illustration. Art Center presented him with the Don Kubly Award for Professional Attainment in 2002 with the statement that Phils second great talent--his affinity for teaching--was waiting to be more fully expressed and is reflected in the creative talents of the many students who have sought and found inspiration during his years in the classroom.

Philip Hays probably inspired more successful artists than any other teacher I can think of. He welcomes experimentation and innovation, said Paul Davis of his mentor and friend when Hays received the Society of Illustrators 2000 Distinguished Educators in the Arts award. His favorite expression is 'Why not?

Philip Hays died on October 24, 2005 at age 74. Aitken wrote, In a quiet and mysterious way, Hays work slid under the door of popular culture and affected it like sand falling in the cracks of a machinethe glamour of the subjects fade and their flaws and vulnerability appearrevealed is our beautiful disintegration as were faced with the inevitable race toward mortality.

I never wanted to be anything but an illustrator, Hays once said. There were those who separated fine art from illustration, looking down their noses at the latter. Sometimes people would ask if I ever wanted to do my own work. I always replied, 'Everything I do is my own work.' I loved working against a hard edge, getting an assignment and turning it into my own -- pleasing the client and myself. I was never tempted to be a painter. Andy Warhol, Ben Shahn and Richard Lindner were heroes of mine, primary influences. They instigated the movement and if I am considered part of the next generation that helped revive the aesthetics of illustration, I am proud."