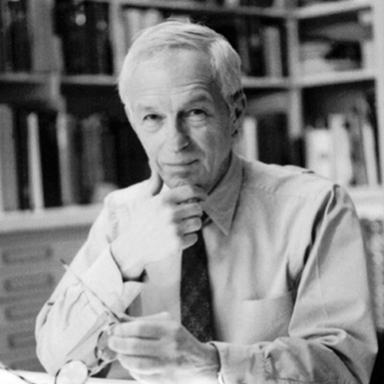 One assumes that when R.O. Blechman came into the world in 1930, he came quietly. It is difficult to imagine him being loud or obstreperous even in the trauma of birth. His speaking voice never quite reaches that of a stage whisper, but it fits perfectly his persona of determined understatement. And his drawings reflect the man: seemingly tremulous and uncertain, but, in fact, boldly original.

Bob was born in Brooklyn. His mother, determined to have an artistic son, obliged him to take the entrance exam for the High School of Music and Art. He was accepted. The die was cast. By the time he entered Oberlin College, he thought of himself as a cartoonist and began drawing forThe Oberlin Review. It is these drawings that constituted much of his portfolio when he returned to Manhattan and sought assignments in illustration in the early 1950s. An editor at Henry Holt liked one of his hand-sewn books and asked him to produce a similar one with a Christmas theme. The result wasThe Juggler of Our Lady, which proved a critical and commercial success.

At this pinnacle of his young career, he was drafted into the U.S. Army. He was not, however, entirely unlucky. While others of his age were serving in the still-active war in Korea, he was assigned to Asbury Park, New Jersey. It was less exotic, but a lot safer. After his discharge, he accepted an invitation from John Hubley to join Storyboard Inc., a studio that specialized in animated films for advertising agencies. Although Blechman describes his time there in gloomy terms, it was nonetheless where he learned animation, and animation was the art form in which he would produce his most imaginative work.

During the '60s, commissions were forthcoming, his checkbook stabilized, and his name became known. Before long his unique drawing style could be seen in a variety of magazines, notably,Harper's Bazaar, Trump, Punch, Esquire, Humbug, Theater Arts, andShow. Most of these features were sequential drawings, a form of comic strip that reflected his strong social concerns in a humorous way. Humor was also the basis for his memorable print campaign for Capezio shoes, as well as drawings for Irving Trust, the New School, Kaufman Carpets, and D'Orsay perfumes. In 1967, he created the storyboard and drawings for an animated commercial for Alka-Seltzer, which remains a classic of American advertising.

In the early 1970s, he started his own animation studio, The Ink Tank, which was devoted largely to producing commercials. Forays into the editorial world were less rewarding. The lack of interest in his first book,Onion Soup(1964), so discouraged him that he did not produce another for nearly a decade. Readers of theVillage Voicewere likewise unenthusiastic about his Vietnam cartoons. By the early 1970s, however, his projects were attracting more interest.Tutto Esaurito(No Vacancies), a small book published in Italy, was an ironic observation on the birth of the Christ child to an unwelcoming world. With the agonies of the Vietnam War still playing out in the national consciousness, Blechman turned to the Old Testament as the source for a metaphorical retelling of Abraham and Issac, that near tragic story in which the fatherthat is, the stateoffers the life of his sonthe next generationin fulfillment of an old belief. Arnold Black was the composer for this film, as well as for the next, a more technically accomplished one calledExercisefor the Children's Television Workshop.

Late in that decade, the Public Broadcasting Company offered Blechman the opportunity to create a Christmas special.Simple Giftswas an ambitious undertaking incorporating separate segments by Maurice Sendak, James McMullan,Seymour Chwast, Charles B. Slackman, and Blechman. It was a great success, and is still repeated at Christmastime.

In an entirely different vein, he later created an Emmy award-winning sixty-minute animated film,L' Histoire du Soldat (The Soldier's Tale). Inspired by the music Stravinsky wrote for this fable, Blechman provided visual effects that make this one of the most inventive animated films ever made.

The last two decades have more than fulfilled the promise of those earlier times. His stunning habitat on West 47th street with its arched ceiling and stained glass windows thrives as an animation studio. From there have come animated commercials for clients including Barney's, Perrier, Hershey's, and MTV. Bob also turns out covers for a variety of magazinessome twenty for theNew Yorker, but also for theAtlantic Monthlyand his special interest, the quarterlyStory. With the exception of two very early issues, he has drawn every cover ofStoryfor the past ten years.

Bob and his lovely wife Moisha Kubinyi have two abodesone on Central Park West and the other up in Columbia Countyboth of which reflect their favored life style, their perfect taste, and attention to detail. Their sons are grown nowNicholas is currently the art editor ofThe New York TimesOp-Ed page, and Max is a candidate for a doctorate of Philosophy from the Sorbonne. Causes for pride. Oh, yes, about those initials, R.O. They are taken from a transposition of Blechman's given name, Oscar Robert.