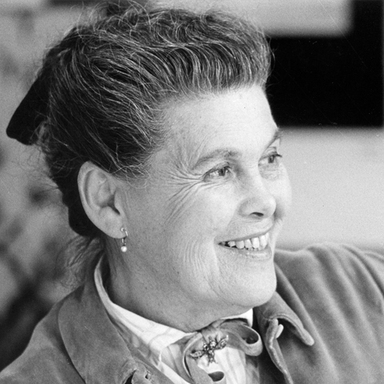 Bernice Alexandra "Ray" Eameswas born on December 15, 1912 in Sacramento, California. She graduated from Sacramento High School in 1931 and, two years later, from New Yorks May Friend Bennett School, where she pursued her interest in fashion design. Thereafter, for a period of six years, Ray studied with Hans Hofmann, the abstract expressionist. In 1937, Rays paintings were exhibited in the first group show of the American Abstract Artists, of which she was a founding member.

In 1940, at Cranbrook Academy of Art, she began auditing weaving classes taught by Marianne Strengel. Along with several other students, Ray helped Charles Eames (inducted into the Art Directors Club in 1984) and Eero Saarinen in readying for MoMAs Organic Design in Home Furnishings competition; they won two first prizes.

Later that fall, Ray returned to New York City and, that winter, corresponded with Charles at length. In June of 1941, they married in Chicago on their way to Los Angeles.

Charles and Ray settled into a two-bedroom apartment designed by Richard Neutra. During the day, Ray painted and designed covers for Arts & Architecture magazine while Charles worked at MGM. At night, in their spare bedroom, they experimented with molding plywood into compound curves. Their goal was to design simple, comfortable, affordable, single-shelled chairs that could be mass-produced; this was achieved in plastic a few years later.

Their accomplishments in molded plywood included sculptures and childrens toys with compound curves, chairs with separate backs and seats (the DCW and LCW) and mass-produced pieces used in WWII by the U.S. Navy (including 150,000 leg splints as well as airplane parts and body litters).

The Eameses expanded to an old bus garage at 901 Washington Boulevard in Venice, California in 1943. There, for more than 40 years, the office of Charles and Ray Eames produced furniture, toys, films, exhibitions and so much more.

In 1945, a competition was announced by Arts & Architecture magazine that challenged architects to reconsider the notion of house in preparation for the influx of returning GIs. Ray and Charles designed and built their home (Case Study House #8) alongside a meadow on a bluff overlooking the Pacific Ocean; it was one of the first homes to use industrial materials in a residential setting. The Eameses moved in on Christmas Eve of 1949 and lived there for the rest of their lives. Their studio, connected to the house by a brick patio, was used for planning and for making films, including Toccata for Toy Trains.

Further highlights of their collaborative work could arguably be considered: the Lounge Chair and Ottoman, a departure from their other chairs in its melding of hand craftsmanship and technology; the House of Cards, a unique, colorful construction toy made of slotted cards; Powers of Ten, one of 125 films made in 28 years, which explores the relative size of everything in the universe; and Mathematica, their first major exhibition designed to be of interest to a bright student and not embarrass the most knowledgeable.

Ray died ten years to the day after Charles in August, 1988. During those years, she continued to work at 901 and to live in the Eames House in Pacific Palisades. Rays projects included working on the comprehensive book, Eames Design, and orchestrating the cataloguing of their 750,000 images, which, along with other material, was given to the Library of Congressa total gift of 910,000 objects.

Ray and Charles Eames left a vital legacy that continues to be cherished. Young designers refer to the Eameses as sources of inspiration. Eames furniture continues to be manufactured authentically by Herman Miller, Inc. and Vitra International. Powers of Ten frequently enlivens classes, museums and brainstormings, and is celebrated on October 10th of each year. Exhibitions travel to a worldwide audience. The Eames family has placed the Eames House, visited by thousands each year, in a foundation for future generations to enjoy; last year it was designated a National Historic Landmark. Nearby, in Santa Monica, is todays Eames Office, which provides educational experiences (including www.eamesoffice.com) that celebrate the creative legacy of Ray and Charles Eames. And, finally, this year, the United States Postal Service honors the Eameses with a pane of 16 stamps.