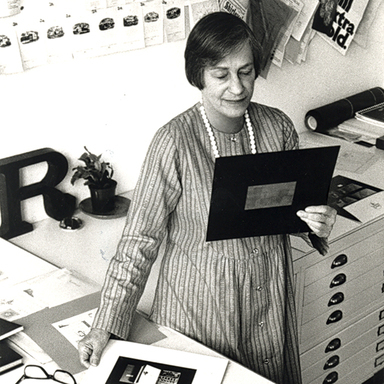 Oscar Wilde once wrote, "It is through art and through art only, that we can realize our perfection." Reba Sochis is the personification of Wilde's statement.

Born in Philadelphia, Pennsylvania, Reba Sochis grew up expecting to follow in her sister's footsteps: go to university and study to become a teachercertainly the proper profession for a proper young lady and most acceptable to our country's social attitudes at the time. Always interested in art, Sochis, however, saw her future develop differently. Not wanting to be confined to a classroom, she convinced her parents to allow her to enroll in the Philadelphia Museum School of Art.

The year was 1929. The country was about to be thrown into the depths of a great depression. Fortunately,Alexey Brodovitchhad just joined the school's faculty. He was to be a great influence in her approach to graphic design. His teaching methods were as unique as he was. Brodovitch did not dwell on technique, focusing instead on the philosophy of design. According to Sochis, "The more he tried to provoke his students, the harder we worked," a character trait many an assistant would also lovingly attribute to Reba Sochis.

By 1934, she moved with her husband to New York City. In the midst of the Depression, to supplement their income, Sochis freelanced as a designer, creating various book jackets for small publishing houses. She eventually landed her first job in editorial layout design atEsquire Magazine, where she recalls being given the opportunity to experiment and take risks. After Esquire, Sochis headed forCharmMagazine.

By the end of World War II, she was hired as an art director for a large design firm in New York called Beacon Studio. Sochis resumed her career in what was, with the exception of her only female counterpartCipe Pineles Burtin, then art director atSeventeenMagazine, the unchartered world of women in design.

She was the only woman responsible for a staff of over twenty men. Sochis looks back on her pioneering days at Beacon as being a "jewel of a job. She attributes this to the fact that she never looked upon herself as a threat to the men and their jobs. Sensing this, they quickly accepted Sochis for her talent. She immediately became one of the boys without ever having to sacrifice her femininity. As long as her high standards of work were not compromised, there were no wrinkles at Beacon Studio.

One of Beacon's biggest accounts was Talon Zippers. Quite pleased with Sochis's elegant work for their promotional pieces, the client encouraged her to open her own studio. Late in 1949, Reba Sochis ventured out on her own with Talon as her first and only account. Because of the plethora of promotional materials Talon required, Sochis was swamped with work. She needed to hire a talented assistant and fast! Her first full time employee was a 19 year-old Pratt junior namedGeorge Lois. Lasting over 40 years, the mutual love and admiration both still have for each other is steadfast.

Mention Lois to her and you hear only superlatives. Lois also reminisces about his first boss: "In just one day working for Reba, you could learn more than in four years at Pratt or Cooper Union. She was the toughest boss in the world, but she was also the sweetest woman you could hope to know.

As Sochis's reputation for quality design grew, so did her studio, necessitating the hiring of more assistants. She turned it into a wonderful greenhouse of talent, recruiting Pratt and Cooper students as full- and part-time assistants. Among those who benefited from Sochis's tutelage, eventually moving on to outstanding careers in their own right, were:Seymour Chwast,Bob Gill, Kit Hinrichs,Steve Horn, Andrew Langer, Gilbert Lesser,Rick Levine,Tony Palladino, Tony Russell and Bob Tucker.

Reba Sochis instilled in her young assistants a motivational work ethic seldom seen today. She was able to mold them because "they were young and talented and had no negative work habits to begin with. Known for being a perfectionist, Reba Sochis nurtured a generation of designers that certainly owe her an immense debt of gratitude:

Seymour Chwast: "For the short time I worked for Reba Sochis her dedication to design and craft amazed me. She would endlessly fuss over the letter spacing of type for a letterhead...Reba accepted only perfection."

Bob Gill: "Reba designs like an angel and swears like a cab driver. What more can anyone want in a role model? I love her.

Steve Horn: "Reba Sochis is the best thing since chopped liver! She began by putting the fear of God in me. In the short time I worked there, she gave me a well-rounded education that's proved invaluable. I learned more from Reba Sochis in nine months than most people learn in a lifetime.

Andrew Langer: "Reba Sochis was not an easy person to work for. When she liked your work, you received quiet praise. When she didn't, she really let you have it! Reba's a very stubborn person. But then the best usually are."

Rick Levine: "Reba Sochis influenced me greatly as a graphic designer. Her work was new, exciting and fresh. She taught me how to layout a page with great lan.

Tony Palladino: "Reba was a peer of mine, a work friend. A determined woman devoted to the quality of communicationwhich was a difficult role for a woman. She made us 'tough' guys think differently about women in design. Reba would rivet you against the wall about clear, intelligent communicative messagesand hold you to it. You couldn't walk away from Reba with a half-assed truth. You had to love her for that.

Tony Russell: "Met Reba the day after arriving in New York from England in November, 1963. Working with her and knowing her design standards cushioned the culture shock and persuaded me to stay. I value her friendship still.

The work Reba Sochis turned out from her atelier was flawless and the envy of conceptual designers. Her list of satisfied clients was a tribute to her professionalism. Sochis's work for Talon, Borghese, Bulkley Dunton, Lincoln Center, New York Telephone, Pappagallo, Revlon, JP Stevens and Shell Oil are marvels of detail and fine design.

A case in point was a shopping bag she produced for the newly launched Pappagallo shoe stores. In order to achieve the visual look of an intricate mosaic pattern, Sochis and her assistant, Andrew Langer, literally cut thousands of small tile-like pieces from sheets of gold paper. Each had to be positioned onto a mechanical with a tweezer! It took them weeks to complete the project, but the end result was a striking work of art.

For a Lincoln Center corporate fundraising brochure, Sochis decided to use safety paper, more commonly referred to as checkbook paper. Indeed, a very subtle, yet effective method of getting people in the mood to donate money.

More often than not, her incredible work was also the result of time being on her side. The majority of her jobs did not require deadline-insertions; thus, if Sochis was not pleased with a particular design, it was completely scrapped and redone from scratch.

At one point, she was asked to teach at Pratt. Sochis never realized how much she disliked teaching until actually setting foot in a classroom. After one semester, Sochis left Pratt, preferring instead to instruct eager young assistants from the comforts of her own studio.

Today, Reba Sochis is active in design, advertising and promotion. She selectively works on a wide variety of challenging projects.

According to Sochis, enlisting students from design schools presents a problem. "The George Loises and the Bob Gills simply don't exist anymore. The high caliber of young talent is not as prevalent as it once was."

Reba Sochis readily admits to being a demanding taskmaster. But it's done out of a deep-rooted love and respect for her craft. In an era of computer-generated design amidst a get-it-done-yesterday world, it's comforting to know that there are people like Reba Sochis. As long as she still cares, that twinkle in her eyes will continue to light up the design world.