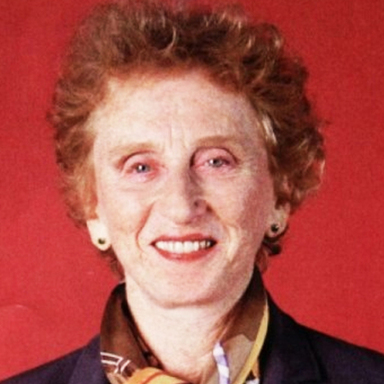 Goldie "Red" Burns is considered by many to be the godmother of Silicon Alley, New York's downtown multimedia hub. Her former students have gone on to launch Internet start-ups, create interactive twits at traditional media companies and pioneer new communications technologies worldwide.

Burns is the chair of the Interactive Telecommunications Program (ITP) at New York University's Tisch School of the Arts, where she holds the Tokyo Broadcasting Chair in Interactive Communications and New Media. Since its inception in 1979, the ITP has pioneered the field of new media experimentation.

An Ottawa, Canada native, Burns has been exploring the social benefits of technology since she received a black-and-white portable video camera nearly 30 years ago. She was trained as a documentary filmmaker at the National Film Board of Canada.

In 1971, Burns co-founded the Alternate Media Center, a research and implementation center for new technologies at NYU's Tisch School of the Arts. There she designed and directed a series of telecommunications projects, including a two-way cable system in Reading, Pennsylvania, that allowed elderly people to get information about social services through interactive television. She also developed telecommunications applications to serve people with developmental disabilities and initiated one of the first field trials of teletext in the United States.

This innovative research led to her co-creation of ITP. It was important to Burns that ITP be housed in NYU's art school in order to draw students from a wide variety of academic and artistic backgrounds. "People who come from other disciplines, not just computer scientists, can now create their own forms of communication," says Burns. "Doctors and architects and educators can use more than wordsthey can use pictures and sound. "

The program, utilizing a unique interdisciplinary approach is, according to Burns, "An experimental environment in which students can think and create in concert with one another." Her students create web sites, build interactive museums, and even build computer mice out of such unlikely objects as tea strainers. Some ITP classes currently being offered: "Digital Journalism," "New Media and Interpersonal Behavior," and "Developing the Interactive Idea."

Please note: Content of biography is presented here as it was published in 1998