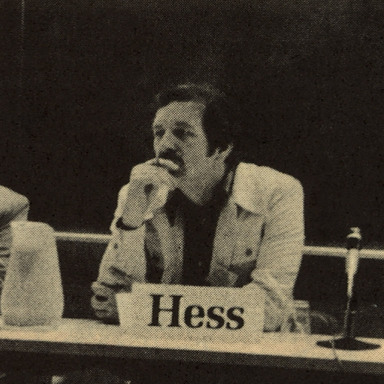 Dick Hess was a big man. Everything about him existed on a grand scale. He had the broadest vision, the most prestigious clients, the largest dog, and the biggest heart.

His talent was so big that it literally split into two equal parts: Hess the designer and Hess the illustrator. Both parts were strong enough for two separate people. They existed in total independence of each other. But both parts were absolutely reflective of the man.

Hess was born in Royal Oak, Michigan in 1934. He began his artistic career at the age of 17 creating paint-by-number kits for the Palmer Paint Company in Detroit. When the company asked Hess to design packaging and brochures for their products, he went out and bought a copy ofAmerican Artist, which just happened to contain an article on Paul Rand. The article inspired Hess to become a graphic designer.

After a few night school classes and a short stint at Michigan State University, Hess won first and third places in a local Art Directors Club competition. He was 21 years old.

Hess began his professional design career in 1955 as an art director for J. Walter Thompson in Detroit, then N.W Ayer in Philadelphia, and Benton and Bowles in New York. In 1965, he formed his own graphics firm, Richard Hess, Inc. For a brief period (1968-70) he formed a partnership with Sam Antupit (Hess and/or Antupit) and in 1971 returned to the exclusive partnership of Hess & Hess. He was always his own best partner.

Hess began his design career following the time-honored tradition of all young designers. He imitated his betters. The 1950s was a relatively primitive time for graphic design in the United States, but there wereRand,Alexey Brodovitch,Bradbury Thompson,Alvin Lustig, and in the early 1960s,Ivan ChermayeffandHerb Lubalin. And there were design periodicals. Young Hess learned typography from the stars he saw inGraphis. He was an avid reader who also taught himself subjects as wide-ranging as world history, politics, cowboy etiquette, and banjo pickin'. His subsequent work became a personal combination of everything he saw. It was classical with a European elegance, but it contained distinct American overtones, a crazy combination of organization and eclecticism, reason and emotion, order and irreverence.

In his own firm, Hess began to attract a very classy roster of clients: Du Pont, IBM, PanAm, Xerox, Champion International, Chase Manhattan, AT&T, and so on. He had developed the distinct knack of bringing warmth and charm to corporate communications without compromising the dignity and importance of the corporation's image. This was a miraculous feat in the late 1960s and early 1970s when nearly all corporate communication design was slave to Swiss Modernism. Hess's exquisite annual reports and corporate publications for Champion in the 1970s became the standard-bearer for annual report design in the 1980s.

In the late 1960s, Hess redesignedEvergreenandVista, a small ailing magazine published by the United Nations. Hess's logo forVistamay be the best magazine logo ever designed (it works upside down and backwards). The redesign ofVistawas simple, straightforward, and classic. Hess became an illustrator's art director by commissioning big, poster-like art fromMilton Glaser,Ed Sorel,Seymour Chwast,Paul Davis, etc. But when the art budget ran out, Hess began to make the paintings himself.

In 1971 he found himself beginning a second career, Hess the illustrator. He began illustrating in the same way he had begun his designingby emulating his heroes. He was influenced initially by Henri Rousseau's and Edward Hicks' primitive paintings. He began to create spoofs of paintings by the old masters and various other genres. But by the mid-1970s, his illustrations had a voice of their own.

One of his early assignments was a cover forEsquirecommissioned by his former partner, Sam Antupit. Ironically, it was an unfinished paint-by-number portrait of Lyndon Johnson. (Hess was right for the job.)

From the beginning, Hess's illustrations were received enthusiastically. His paintings graced the covers ofTime, TV Guide, New York Magazine, and the New YorkTimesMagazine. They appeared on record covers, on posters, and in all forms of corporate communications for Exxon, Xerox, CBS, AT&T, Mobil, etc. His paintings became a grand combination of the primitive and sophisticated, varying from the humorous to the mysterious, from the romantic to the absurd. In all of Hess's work, there was always the grand contradiction, even in the very notion of daring to carry on in two very distinct careers at once.

Through the 1970s and 1980s, Hess continued to design and paint with equal fervor. In the late 1980s, he created "The Elders, a series of promotion pieces for Champion International. In a period where popular design trends relied on eccentric typography, icons, and fancy production values, Hess produced a classical, serious, and important piece of work.

He interviewed ten Americans, each of whom had lived at least 100 years. The elders recalled their childhoods and produced a vivid portrait of American history. The "Elders" series was simply produced and elegantly designed. The interviews were accompanied by portraits of the speakers, time-lines, and a beautifully researched imagery of America.