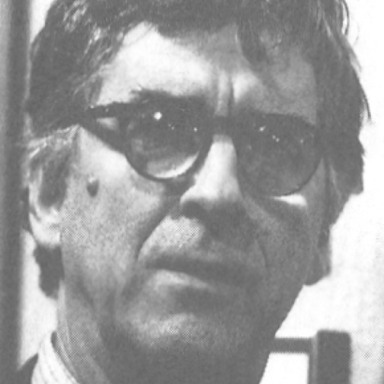 Talent runs in Robert Weaver's family. His brother Fritz is the extremely gifted television and Shakespearean actor. Robert is the wonderfully versatile illustrator whose striking images have graced the pages of the country's most respected magazines. His work came to the forefront of American illustration at a time when the country needed a graphic conscience. Robert Weaver, through his cleverly placed brush strokes or pen in ink, was our consciencewhether we knew it or not.

Born in Pittsburgh, Pennsylvania in 1924, Robert Weaver attended the Carnegie Institute of Technology in his hometown and the Art Students League in New York. After serving overseas in the military during World War II, Weaver did not immediately return to his native soil, opting instead to settle in Venice. He spent two years studying at the Academia Delle Belle Arti. Amidst the beauty of Renaissance antiquity and canals dotted with gondolas, Robert Weaver continued to master his drawing technique.

By the mid-fifties, Weaver arrived back in New York armed only with a modicum of confidence and a battered book filled with color mural sketches. He dropped them off atTown & CountryMagazine. The publication's art director, Tony Mazzola, was intrigued by his work and hired him to illustrate several manuscripts scheduled to appear in subsequent issues of the magazine.

In what has become almost a folklorish tale of naivet, Weaver, knowing little of the technical jargon used to put a magazine together, misunderstood Mazzola when he was asked to "omit bleeding and stay out of the gutter." Weaver took this to mean no violence or harsh visuals! Finally explaining the terminology to Weaver, Mazzola proceeded to use him on a number of occasions. For Robert Weaver, the thrill of seeing his work appear in print and admired by countless people became an "addiction" that lasted four decades.

Because of his vivid visual style, magazine art directors put very little in the way of restrictions on him. Weaver is particularly indebted to ADC Hall of FamersLeo LionniandHenry Wolffor encouraging him to "break the rules."

Weaver's talent did not stop at illustrating for magazines. His increasing popularity spilled over into the world of promotion and graphics as a record jacket illustrator. Weaver's portrayals of jazz personalities, from traditional to bebop, are especially noteworthy. Whether it was a study of vibrophonist Milt Jackson hunched over his instrument or of alto legend Charlie Parker playing the blues, Robert Weaver captured the true essence of the music through his memorable visuals.

His work has won him a myriad of recognition in the form of articles, awards and gallery exhibits. Weaver was inducted into the Society of Illustrators Hall of Fame in 1985. He's been a visiting professor at Syracuse University and for over 30 years has taught illustration at New York's School of Visual Arts.Silas H. Rhodes, chairman of the board of SVA, characterized Weaver's unmistakable style by saying, "In a triumph of principle, Robert Weaver's art is the fine art of illustration."

A typical class will no doubt hear Weaver talk about his craft and wax philosophical on a variety of topics, be it the preservation of our environment or the beauty of baseball. He encourages his students to split from the ordinary and take chances. Weaver regularly brings in people for his students to study and draw. They range from street people and ordinary people to dancers and Guardian Angels, all representing the fabric of our society depicted via the sketchpad.

As tribute to his dynamic body of work, the School of Visual Arts has had two very successful Weaver exhibitions: a retrospective in 1977 and a more recent show encompassing his extraordinary dimen- sional collages.

Realizing that times change and magazines can no longer provide a forum for his talents, Weaver has turned to the book format, which offers him a wider canvas with which to express himself. A variety of projects, his dimensional collages and his teaching duties keep him busy.

A close friend of Weaver's, and one of the nation's best illustrators, Jim McMullan paid tribute to him this way:

"Perhaps it is impossible to speak of Weaver's drawing as a quality distinct from the special kinds of connections he makes in his work, for that same synthesis of surface and subject occurs in the ideas that animate his paintings. They are ideas that remind you always of the immutability of the two-dimensional surface while taking you simultaneously on a wild mental journey of associations. The way in which he manipulates your view of the surface in the painting and of the idea "surface" in the objects painted is very much the way a magician shows you the handkerchief; 'Here it is, this flimsy piece of clothI wave it aboutIt is all rather insubstantialBut, presto! A bouquet of flowers.' In Weaver's case, the handkerchief might be the paper he is drawing on, or the paper he draws. He insists on its paperness only to prestidigitate the effect of some other reality and finally to return you to the paper."