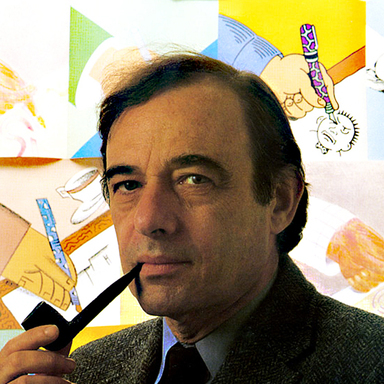 Seymour Chwast's favorite building is the Chrysler, and his favorite bird is the cassowary. The selection of the first is self-explanatory; the second demands closer study for revelation. The cassowary is a giant among birds, a self-effacing bird, but very fleet of foot. And it can disable a man with a single thrust. Its upper body is multi-colored, vivid blue and orange, shocking pink and violet. To a first-time beholder it appears a strange and somewhat startling bird, even an amusing creature.

And that, perhaps, represents its appeal to Seymour Chwast, a fellow who nevertheless admonishes, "Don't ask me about humor! I know nothing about it." No? The man who conceived of the bust of Richard Nixon as a constipated medieval fortress? Dr. Sigmund Freud with a live monkey on his back? The testimonial presentation wherein the honored guest is never mentioned? And the society couple in the open touring car accompanied by Walt Disney's Pluto?

"Chwast is fundamentally a humorist. His humor is dry, ironic, only rarely sardonic. The play on images is witty, not flamboyant, taking off on human foibles or meanness in a seemingly deadpan banality that is, despite its first-glance ingenuousness, rich in veins of sophistication and subtlety." To disclaim the idea that humor is a serious business misses the fundamental fact that all comedy has its roots in basic incongruity. A deep awareness of life's anomalies detracts not a whit from the widely accepted belief that Chwast is one of the most influential artists of this century and that he has created a style that is synonymous with the most creative and progressive aspects of graphic art and design. Clearly, there is much more to the man than his sometimes amused and bemused view of the world.

But to get the fully rounded picture we must go back to the figure of Pluto, smiling over the shoulder of the top-hatted swell. On more than one occasion Chwast has announced, "Walt Disney was my idol when I was a little boy, as he was everybody's." As a result, even today, he remembers the first drawing he made: a portrait of a lady in a beauty shop drawn with a mascara pencil on a piece of cardboard. Chwast's mother insists the first effort was a giant Pinocchio rendered on a mattress carton.

Both agree, however, that Seymour was born in the Bronx in 1931 and that he attended Abraham Lincoln High in Brooklyn. There he met one of the people who most influenced his life,Leon Friend, a European migr who instilled in him the love of typography and the poster image, as well as the motivation to succeed. Later, at Cooper Union he credits Nicholas Marsicano and Sidney Delevante with adding to Friend's foundation. And on his first job, in the promotion art department of the New York Times, Chwast's boss,George Krikorian, inspired and encouraged his work in graphic design and illustration.

The now world-renowned Push Pin Studios, after a dinner in a Chinese restaurant on Union Square, had its genesis in a nearby loft where recent graduates Chwast,Milton Glaser, andEdward Sorelpooled their talents to produce freelance work. To promote their young and fragile business the founders produced the original and much-celebrated Push Pin Almanack, which eventually grew into the Push Pin Graphic, whose issues have become graphic collectors' highly prized items. Later, members of the Studio included Reynold Ruffins,Paul Davis, Jim McMullan, John Alcorn, Jim Lewis, Barry Zilid, Isadore Seltzer, and Richard Mantel.

The Push Pin design approach has been called many things, but to date has evaded all attempts to put a single label on it. Humor, Art Deco, Art Nouveau, Surrealism, all find expression with the result that the only neologism that seems to fit is Push Pin.

Chwast's clients represent many of the most prominent corporations here and abroad. His designs and illustrations have been used for advertising, animated films, television graphics, record album covers, trade and children's books, package designs, posters, magazines, and silk screens. His work has graced the covers of Time, Life, The New York Times Magazine, Forbes, New York, and The Atlantic, in addition to most graphic design magazines. Perhaps feeling that his roles as editor, publisher, artist, and art director were too limited, he moved into the theater world where, for productions of "Candide" and 'The Magic Flute," he created images which were projected onto screens to form the stage sets.

Chwast and other members of Push Pin have been honored by the most prestigious institutions of fine art. A two-month-long retrospective of The Push Pin Style" was held in the Louvre's Muse des Arts Dcoratifs, and from there went on tour in Europe, South America, and the Far East. Closer to home, Chwast's work has been exhibited by the American Institute of Graphic Arts, the Art Directors Club of New York, the Society of Illustrators, the Type Director's Club of New York, the Art Directors Club of Chicago, and New York's Lincoln Center for the Performing Arts. His major exhibitions and gallery shows have enjoyed world-wide success, ranging from the Stedelijk Museum in Amsterdam, to the Muse des Arts Dcoratifs in Switzerland, the Galerie Delpire in Paris and the Kunstegwerbe Museum in Zrich, to a one-man show at the Gutenberg Museum in Mainz, West Germany.

Moreover, the press has been equally attentive to his creations.Idea, Japan's leading graphic arts magazine, devoted an entire issue to his work, and he was the subject of a special feature in theFrankfurter Allgemeine Zeitungmagazine. With such world-wide attention it is not surprising that Chwast's creations have received many design awards, among them the much-coveted St. Gauden's Medal from Cooper Union. Of equal note, his posters are in the permanent collection of New York's Museum of Modern Art, the Cooper Hewitt Museum of the Smithsonian Institution and the Library of Congress. His poster for the PBS series, "I, Claudius," has become both a popular success and a classical masterwork.

Obviously not content with studio life alone, Chwast was a vice-president of the American Institute of Graphic Arts and for the past decade has been a member of theAlliance Graphique Internationale. Moreover, he is a frequent guest lecturer at art schools throughout the United States and teaches at the Cooper Union School of Art.

To be sorted, classified and ranked by academics, collectors and curators is one thing; to be weighed and appraised by ones peers is quite another. Says Reynold Ruffin, Cooper Union classmate and early Push Pin collaborator: Seymour is the hardest working person I know; hes an incredible designer. There is a direct connection between what makes him unique as a person and whats reflected in his work. His approach is innovative, always surprising, but his statements are so simply made, you dont realize the genius, the natural genius in it. A second early associate, Edward Sorel, has a slightly different view: Its Seymours misfortune to be working at a time when bad taste is in. Seymour knows only how to do things in exquisite taste. He has what few others havepersonal vision. Milton Glaser, for twenty years a second driving force at Push Pin, reports that Seymour is extremely gifted with a remarkable range rarely found in a single person: brilliant typographer, terrific designer, unique illustrator. He has made a significant contribution to twentieth century design. He continues to be absolutely first rate. And finally,Steve Heller, a collaborator on many book projects: What I admire most is his subversive side. I mean the Chwast whose wily satire is a translation of his heartfelt social and political commitment into an accessible, comical yet acerbic graphic language.

Professional critics, also, tend to point out the multifarious aspects of both his talent and his style. Says one critic: He is a master of line, sometimes using the outline of uniform weight created by the technical pen, sometimes turning to the free, blotted line of a fat-nibbed pen on newsprint. Another finds that Chwast has made collage into something particularly personal. His talent for combining photographs, engravings and flat, patterned paper is evident in a number of his book covers and advertisements, as well as in the free compositions for thePush Pin Graphic.

About the bridge or chasm between art and commerce, when quietly propounding his personal philosophy, Chwast recognizes the dichotomy: As for my own work, I am split into two parts. My advertising art has to show how wonderful everything can be, what a good life you can have if you buy a certain product. On the other hand, generally in editorial work, I am asked to expose the truer and less pretty side of ourselves. Does advertising lie? I dont know, but in a way it shows our weaknesses as well. In any event, while I consider myself a capitalist tool, along with a well-known business magazine, I share the hope of my colleagues that somehow humanity will be served.

However, on a more mundane level, he goes on to say: What I like to do is amuse myself with visual tricks, conundrums, parodies and the unpredictable. We often dont realize that being able to reproduce our work in newspapers and magazines millions of timesis magic! I think the stuff we put on these pages should be magic too.

Despite his many and varied accomplishments in so many fields, there remains one mountain yet unclimbed, one goal unattained. Some day Seymour Chwast would like to do a full-length animated film. Despite the unhappy fact that no financier has come forth, the Art Directors Club is obviously willing to overlook this unfulfilled ambition. But of the many goals attained, there is no question. As Alan Fern, Director of that National Portrait Gallery once put it, One has only to look at Chwasts work to see that he is a person of exceptional accomplishment and range. An artist with a sense of wit, sympathetic to children, successful as an advertising designer, possessed of a social conscience, he is flexible without being eclectic, sentimental without being maudlin, an artist for commerce whose individuality is never for sale.

And it was Alexander Pope who said it best. How the wit brightens, how the style refines.

Please note: Content of biography is presented here as it was published in 1983.
Photo from AIGA