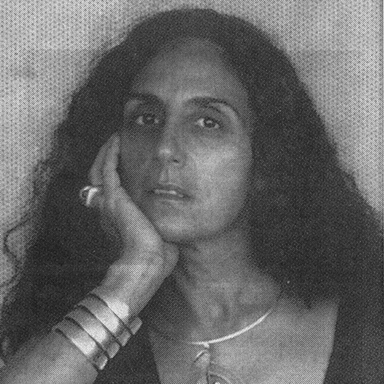 Sheila Metzners unique photographic style has positioned her as a contemporary master in the worlds of fine art, fashion, portraiture, still life and landscape photography. Looking at Metzners photographs is a captivating experience. Innocent, sensual, and sexual, each photo, regardless of subject, exhibits and elicits deep emotion. It is nearly impossible to just glance at Metzner's photos; they beg to be studied. She says, "Photography in its most basic form is magic...This image, caught in my trap, my box of darkness, can live. It is eternal, immortal. The child in the image will not age as the living child will."

Sheila Schwartz was born in 1939 to an orthodox Jewish family in a poor section of Brooklyn. While attending the School of Industrial Art in Manhattan (now the High School of Art and Design), she was awarded the Mayor Robert F. Wagner scholarship to the college of her choice. She chose Pratt Institute, where she majored in visual communication. Her fondness for painting and sculpture also led her to study with abstract artists Jack Tworkov and James Brooks.

After graduating in 1961, Sheila worked as an assistant toLou Dorfsmanat CBS Network Advertising. Five years later, she was hired by the Doyle Dane Bernbach advertising agency as its first female art director, and in 1968 she met and married director, creative director, and painter Jeffrey Metzner. While pregnant with their first child, she was riding in a cab with her mentor and friend, photographer Aaron Rose, discussing whether or not to give up her career in advertising. "He said, 'You should be a photographer. You live like an artist. You have a good eye, you'd be good at it.' "

Metzner started taking pictures, amassing them slowly over the next 13 years, while raising her and Jeffrey's five childrenRaven, Bega, Ruby, Stella and Louie. Jeffreys two daughters from a previous marriage, Evyan and Alison, were also a regular part of the family. "When they were really small, I'd be with them during the day, photographing and printing at night. At eight or nine in the evening, when they were all asleep, I'd take a shower to wake up and put on high heels and lipstick, which I wore then, to give me the feeling of being ready to work." She continues, "My children never interfered. When I couldn't travel because of them, I would find a place in upstate New York and call it Antarctica or Egypt. I found microcosms."

Nine years later, Metzner had accumulated a box of 22 pictures. One of them, a black-and-white photograph titled "Evyan, Kinderhook Creek, caught the eye of John Szarkowski at the Museum of Modern Art, which he included in his famous and controversial exhibition Mirrors and Windows: American Photography since 1960.The New York Timesart critic Hilton Kramer loved the picture and soon it became the dark-horse hit of the exhibition. Later that year, Metzners first solo show at the Daniel Wolf Gallery in New York drew record crowds.

Metzner was now ready to work in color, but not just conventional color. Of her subjects, she once said, "If I use a rose, I want it to be the essential rosethe rose Beauty brought to her father from the Beasts garden." Now she aspired to an essential kind of color. "I wanted something that would last. I was looking for Fresson even though I didn't know they existed."

The Fresson family works outside of Paris and specializes in a labor-intensive four-color "process de charbon" method, which they invented in 1895. Some prints can go up to seven colors, and are pigment prints, the only true archival color print. Metzner is one of just ten American photographers with whom they are willing to work. Fresson prints are the perfect complement to Metzner's stylesoft, sensuous, and grainy, the prints resemble paintings, with a finish which Metzner describes as "a glaze on fine porcelain. The moment I saw the neutral gray," she adds, "I knew it was perfect."

In 1980 Metzner showed her Fresson color prints at her second solo exhibition at the Daniel Wolf Gallery. This show led to commissioned editorial work for such magazines asVanity Fair, Vogue, andRolling Stone. She secured an exclusive contract withVoguefor the next eight years. Metzner considers her portrait of actress Jeanne Moreau forVanity Faira turning point in her career. "It gave me a chance to show my work to a broader audience. I wasn't just producing photographs for the art world."

Of Sheila's foray into fashion, critic Carol Squiers says, "At a time when fashion photography was caught between sterility and the snapshot, Metzner created a sumptuous vision that stimulated the entire field."

Metzner has also worked on special assignment for films includingWild at Heart, Black Rain, Jennifer 8, andBugsy. She has done photography for John Huston, Jessica Lange, Warren Beatty, Uma Thurman, Isabella Rosselini and many others. Metzner has directed television commercials, and produced and directed her own short film on the artist Man Ray. She's also published two monographs:Objects of Desire, which won the American Society of Magazine Photographers Ansel Adams Award for Book Photography, andSheila Metzner's Color. Her work has been featured in numerous books on photography as well. Metzner's first American museum exhibition, "Sheila Metzner 1991: A Retrospective" was held at ICP.

Metzner's photographs are included in the collections of The Metropolitan Museum of Art, The Museum of Modern Art, The International Center of Photography, The Museum of Fine Arts in Houston, The Chrysler Museum, Agfa and Polaroid Corporations, Saks Fifth Avenue, Avon, and the Norton as well as many personal collections.

Says Metzner, "When I started photographing, I was told that photography was dead and that I was really foolish to involve myself in it. I thought, 'It can't be dead, because I'm alive.' Photography has made my life a most extraordinary one."