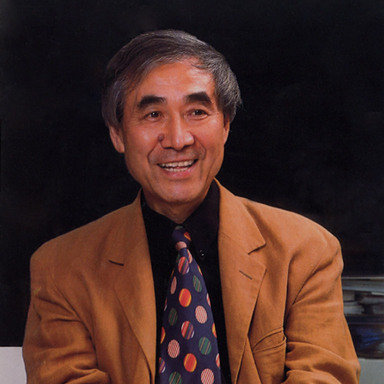 Hollywood cinematographer James Wong Howe once said, "Never state what can be implied." This certainly holds true for modern Japanese communication and design. The Japanese, being culturally homogenous, need not articulate everything in order to be understood. They believe in more indirect and abstract forms of expression.

Shigeo Fukuda is Japan's consummate visual communicator. His induction into the Art Directors Hall of Fame marks the first time for a Japanese designer. Born fifty-five years ago in Tokyo, Fukuda received his design education at that city's National University of Fine Arts & Music. In 1966, his work first gained prominence at a Czechoslovakian graphic design competition. One year later, Fukuda's work graced many posters specially commissioned for Montreal's Expo '67.

It wasn't until later in that year however, that Fukuda's career began to snowball. Fellow Hall of FamerPaul Randinitially caught sight of his work in an issue ofJapanese Graphic Design Magazine. Realizing Fukuda's great potential as a world-class designer, Rand helped arrange his first United States exhibition at New York City's IBM Gallery. This, incidentally, also coincided with Fukuda's honeymoon and his first trip to New York! The exhibit featured his extraordinary, puzzle-like wooden sculptures originally created as playthings for his young daughter. His successful gallery exhibit brought Fukuda even more widespread recognition, resulting in Rand's interview with him on Public Television.

Shigeo Fukuda's work is deeply influenced by Takashi Kohno; a pioneer in modem Japanese graphic design, Kohno was purported to be Japan's first designer possessing a distinct objective along with a creative personality. His posters heralded a new era of visual expressionism. Kohno's work was always controversial, yet visually inspiring. His posters were an exhilarating prelude to Fukuda's own imprint on communication design.

During the 1960's, Shigeo Fukuda became interested in illusionism. He illustrated a column on visual magic for the dailyAshai Newspapercalled: "Ryu Mita Ka?" ("Have You Seen the Dragon?") and he presently presides overIdea Magazine's "Visual Circus," an entertaining, bi-monthly feature injected with boyish wit and enthusiasm.

When it comes to illusionism, Fukuda practices what he preaches. The countless awards he continues to win worldwide are a living testament to his power of graphic legerdemain. Fukuda's brand of magic and illusion never ceases to amaze and enchant. In an Idea Magazine interview, he explains the motivation behind his technique:

"I believe that in design, 30% dignity, 20% beauty and 50% absurdity are necessary. Rather than catering to the design sensitivity of the general public, there is advancement in design if people are left to feel satisfied with their own superiority, by entrapping them with visual illusion."

Contrary to Western styles of expression, Japanese communication is more emotional than rational. Such emotion is profoundly linked to art. Fukuda dramatically shatters all cultural and linguistic barriers with his universally recognizable style.

Shigeo Fukuda's sense of high moral responsibility as a graphic designer is undertaken with firm conviction. His work effectively mirrors and embraces the worldly causes he believes in. Coupled with his fine flair for color and layout, along with advanced Japanese reproduction techniques, Fukuda always manages to get his points across. His 1982Happy Earth Dayposters are prime examples. One is a drawing of an upside-down axe, the tool of destruction spoiling the earth's wilderness. The wooden handle, ironically, sprouts a branch of its own! The second in the series is an illustration of the earth in the shape of an opening seed awash in a pristine sea-blue background. Fukuda's pro-environmental concepts are indeed abstract, yet globally familiar.

Fukuda's most famous poster, entitledVictory 1945, is a bitingly satirical commentary on the senselessness of war. It's an illustration of a cannon barrel with its shell pointing downward, back towards the opening, sealing it forever. In a world where war is big business, Fukuda's chilling, simplistic concept of peace and the containment of nuclear proliferation is absolutely brilliant. It won him a grand prize at the 1975 Warsaw Poster Contest. All proceeds from the competition went to the Peace Fund Movement. As always, Fukuda goes far beyond the bounds of plain function to express a universal plea for peace.

In 1980, Fukuda did another marvelous illusionist poster for Amnesty International. It features a drawing of a clenched fist interwoven with barbed wire. That's not all! The copy at the top simply reads "Amnesty" with the character 's' shaped like a linked shackle. It's work like this that makes Shigeo Fukuda an impeccable communicator.

One of Fukuda's personal favorites is a 1982 poster announcing a ten-man international poster exhibition. He beautifully proclaims the event by showing ten different pairs of colorful hands embraced in friendship. Fukuda's notion of an international forum of design through brotherhood and fraternity is quite a visual feat.

Shigeo Fukuda's abundance of talent goes far beyond his fabulous poster designs. In 1976, Tokyo'sSeibu Department Storecommissioned him to re-design areas of its selling floors. Fukuda rose to the occasion with flying colors. He created shopping rest areas disguised as huge leather briefcases. He linked the store's main wings with gigantic, intricate floor mosaics of Lincoln and Beethoven. The piece de resistance was, however, a rooftop beer garden complete with eighty model sheep grazing to the piped-in strains of Country & Western music.

Fukuda took his keen sense of design even further with his remarkably futuristic UCC Coffee Pavilion in Tokyo. The entire theme is coffee. From floor to ceiling, the UCC Coffee Pavilion is a swirling marvel of synergistic design. Whether it's the simplicity of the logo, the mixed-media sculpture of Mt. Fuji made of hundreds of coffee cans, the multi-colored, expressionless mannequins holding steaming cups of coffee or the countless burlap sacks containing the mythical bean, Fukuda has created one of the most spirited design wonders the world will see. One can, just by looking at it, smell the delicious aroma of fresh, roasting coffee beans.

Such inventiveness also 'spills' over into Fukuda's home as well. His lawn, shaded by a plastic, fried egg, is adorned with deceptively realistic bulldog sculptures. Inside, he lives in a Rube Goldberg world of gadgetry no doubt helping him express his peerless individuality.

Shigeo Fukuda is also very involved with education. Aside from attending seminars and being on numerous design committees, he is a Visiting Professor of Design at Yale University. Fukuda is a staunch supporter of teaching art and design in an enjoyable, relaxed manner. He believes that a compulsory, regimented curriculum deters students from developing a personal sense of aesthetics that should otherwise flow freely from within.

Traditionally, Japanese designers looked to the West for innovative solutions. This is no longer the case. The winds are shifting toward an easterly direction. Shigeo Fukuda, Japan's Houdini of Design, is a welcome part of the shifting breeze. His visual originality and deep dedication to worthwhile causes help keep the sun shining brightly over our ever changing, complex world.