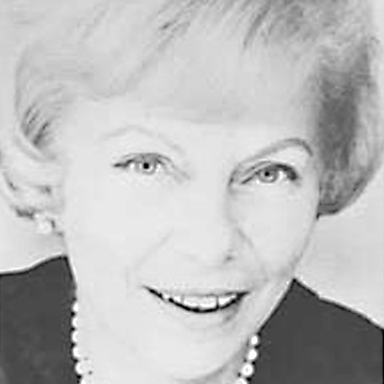 Shirley Polykoff, saidTime, "is a Brooklyn-born mother who can write better advertising than most men in the business." She is one of America's best-known copywriters (and a long-time liberated woman).

When Shirley Polykoff retired from 18 years at Foote, Cone & Belding in 1973, she left there as Senior Vice President, Creative Director, and Member of the Board. Not content to sit at home, she immediately launched her own creative agency. Today, her growing agency, Polykoff Advertising, creates television and print advertising for such clients as Kimberly-Clark, Houbigant and Clairol.

Although it is for Clairol that she has been most honored, her long and varied career includes writing on everything from cosmetics, to food, to airplanes. Her relationship with Clairol at Foote, Cone began the year she joined the agency. Her copy for this client has been recognized for its creativity as well as for the fact that it was significant in changing attitudes about hair coloring. Her phrases are now part of the vernacular: "Is it true blondes have more fun?" "If I've only one life, let me live it as a blonde," "The closer he gets, the better you look," and "So natural only her hairdresser knows for sure.

FC&B President John O'Toole characterizes her and her work by saying "she is one of the great ones. She can pack more human understanding into one line of copy than most writers can get onto a page." He adds that her capacity for work is unlimited.

To borrow a line from Ms. Polykoffs own advertising, "She continues to get better, not older."